Houston, we have a problem

If you are from a younger generation and the title doesn't ring a bell, it is inspired by the Apollo 13 mission.

On my way back home from a tour of the Lockport Powerhouse, I took the industrial scenic route through Lemont. When I went over the high-bridge, I spotted a big towboat down by the Santa Fe bridge. Towboats in the Chicagoland area are expected to have a retractable pilot house because the bridges between here and the Great Lakes haven't opened for waterway traffic since 1954.


So when I got to the other end of the hihg-bridge, I turned around and went back to Lemont and to check it out. It was a regular river towboat with a permanently high pilot house.
As I have described before, this swing bridge no longer swings. And there is no way this towboat is going to fit under it. Fortunately, I don't have to use the pictures in the order that I took them, because at the very end of my stay I noticed the following. 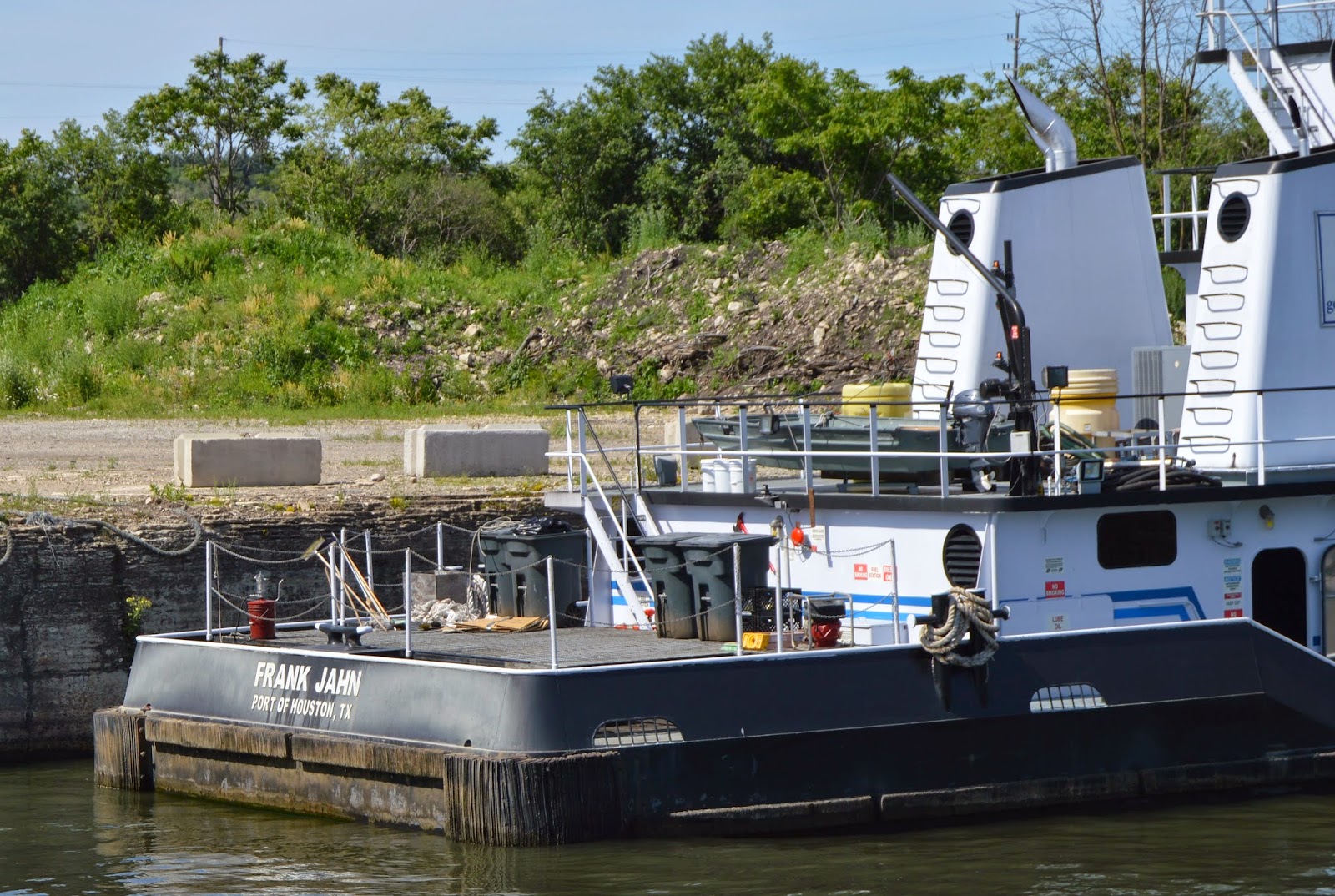 Specifically, it is from the PORT OF HOUSTON, TX. Evidently the Houston office did not get the memo about bridge clearances in the Chicago area. If you look again at the picture with the barges under the bridge, you will see that there is a "house" on the barge that is barely clearing the bridge. So they had better be picking up a load. That is, if the barges are not currently empty, there is no way they are getting back under that bridge after they are emptied. In Paint, I found the water level gauge on the barge. The color of the water at the bottom is about the same as the barge, but it is at the 1 foot mark. So they are empty.

This big towboat setting here confirms that this is the first low bridge on the canal. Probably the reason it is no longer required to swing is that it is not the last low bridge. The bridges across the Cal Sag channel were designed so that the main span could be lifted. But none of the bridges were converted to lift bridges.

I wonder were it is headed. There are quite a few refineries and chemical plants downstream from here. But the only facility I know of upstream is the BP Refinery in Whiting, IN. However, by analyzing the Cal Sag in a satellite map, I see there are oil terminal facilities just upstream, west of S. Kedzie Ave and at Lake Calumet. And there appears to be a rail/barge transfer facility off S. Torrence Ave. Back on the Sanitary and Ship Canal, there seems to be a transfer facility, oil terminal, oil terminal, oil terminals, unknown and unknown. I didn't see any round tanks along Bubbly Creek or the North Branch.

Concerning the BP Refinery, looking at a satellite map, it does not look like they have barge unloading facilities. But then I noticed the Lake George and Indiana Harbor Canals. This canal would still require the tow to go out onto Lake Michigan. I wonder if the little towboats that can clear the low bridges are allowed to go onto the lake or if the tow would have to switch back to a bigger towboat. Or if a little towboat can take one barge at a time across the lake.


It turned out to be a good day for "canal fanning". While I was taking pictures of the big towboat, I noticed downstream that a tow was being "parked" at a material handling yard and that another was running light upstream. 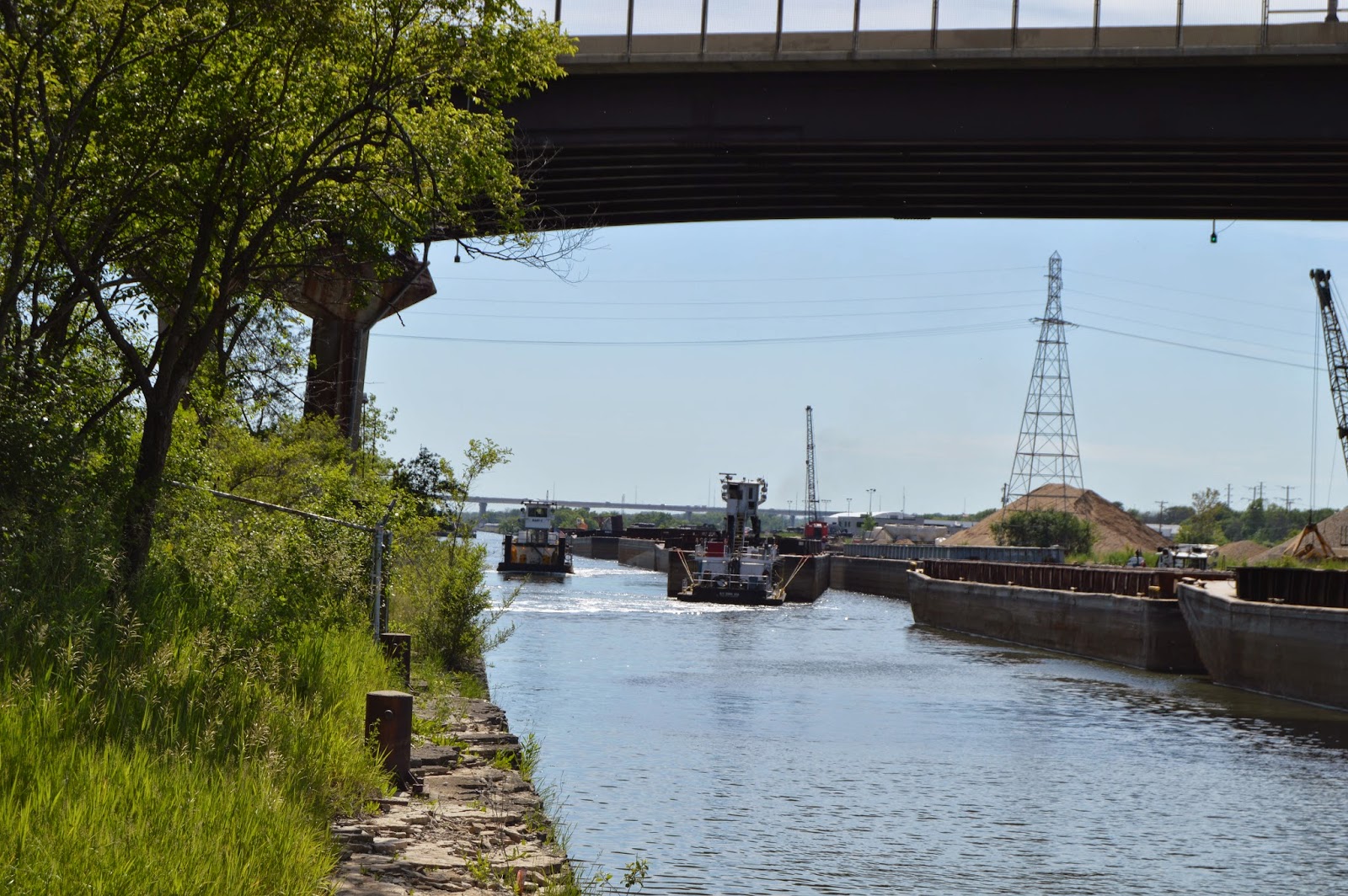 I think the pilot house for the one that is manipulating a barge is at full height. The barge looks empty. So it must not be for the yard, this must just be a spot along the canal where they can park barges. In the following, you can see that the upstream towboat is lowering its pilot house to go under the bridge and that the downstream towboat, MARY C, has its barge in the parking spot. We have seen the MARY C before. In the second picture of Lemont Stephen Street a couple of crew members are getting off to go to town. 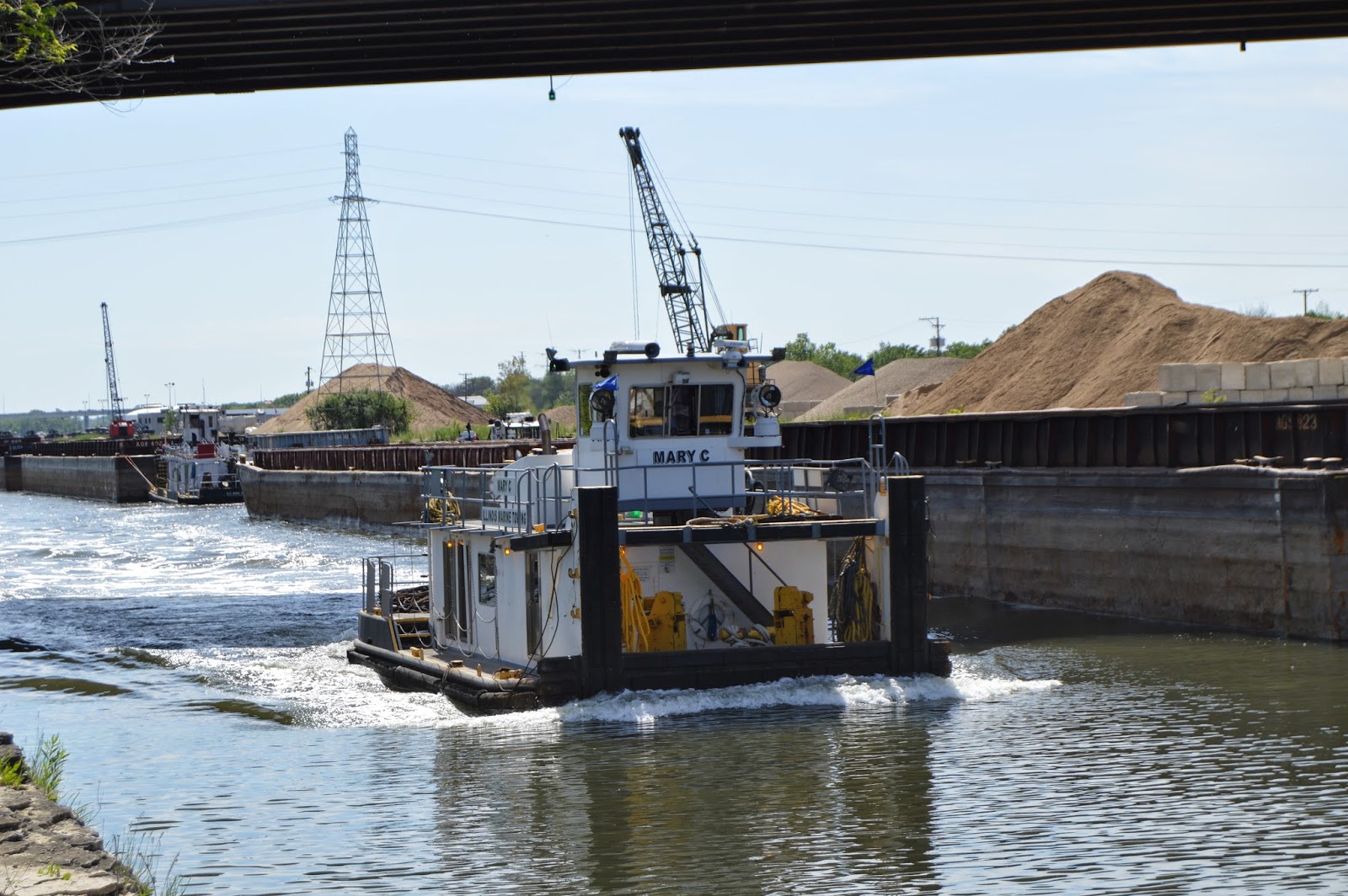 And it now has the pilot house all the way down. 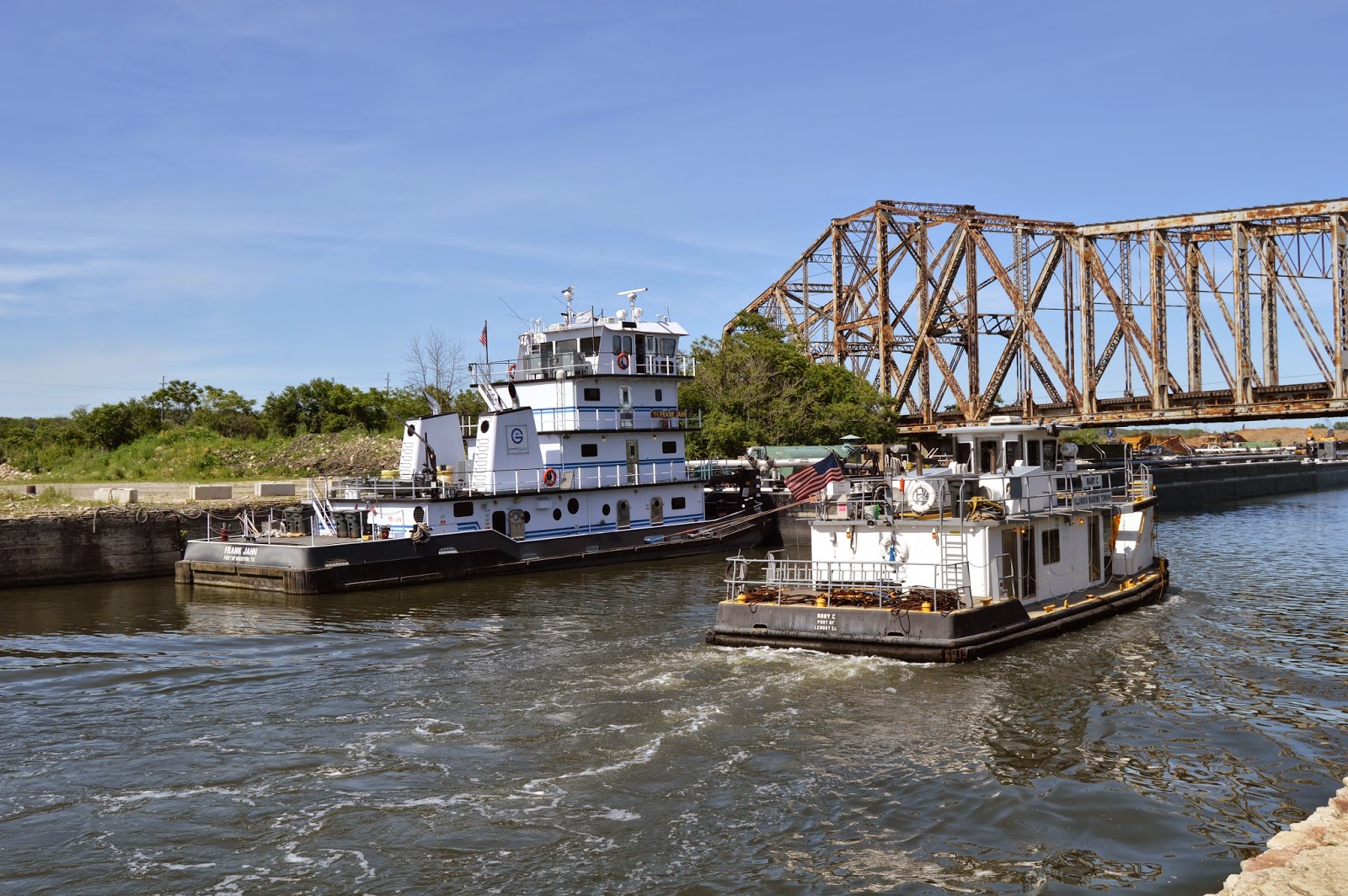 I had the good fortune of a train arriving so I took more shots of the upstream towboat than I normally would. 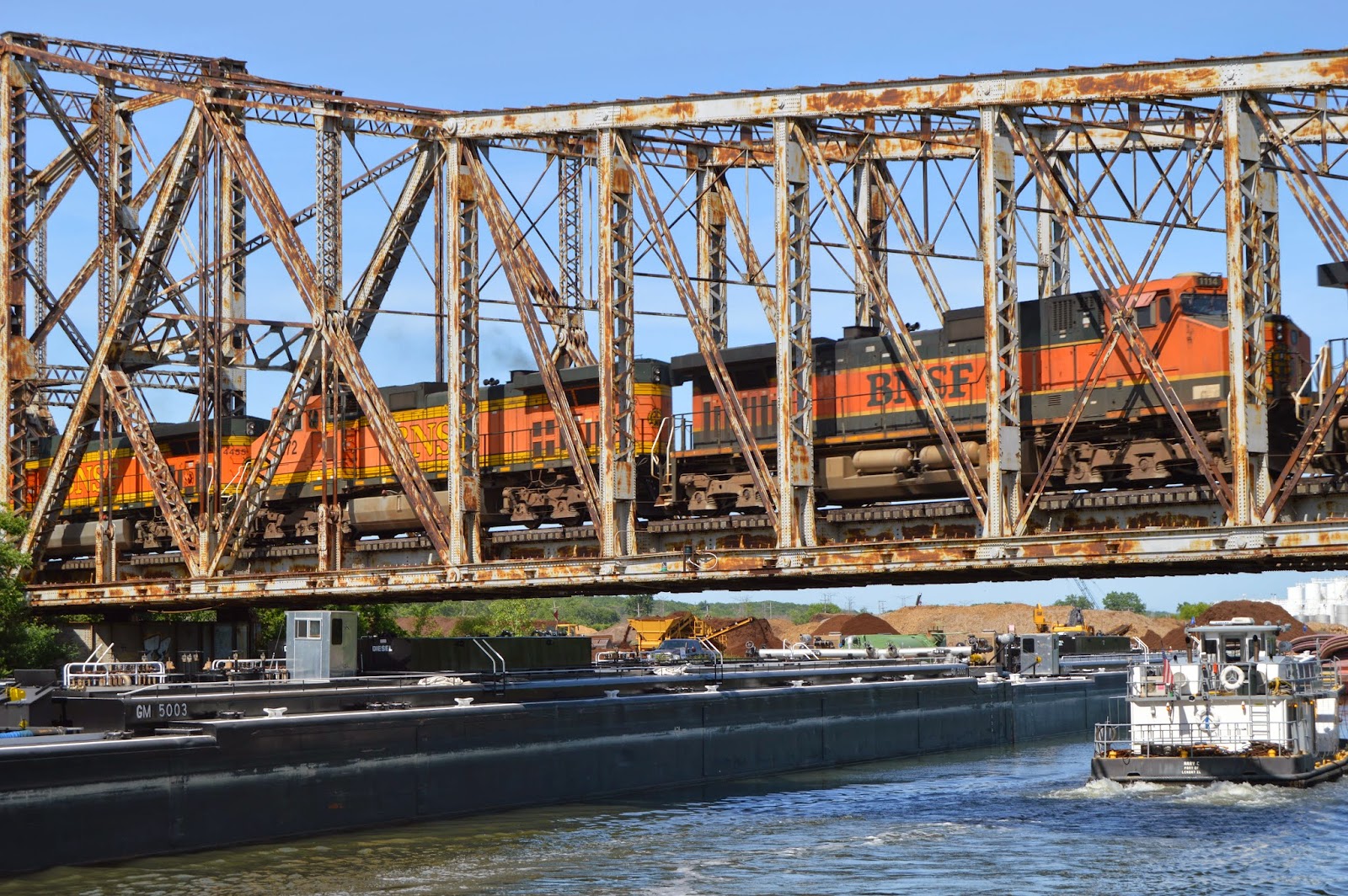 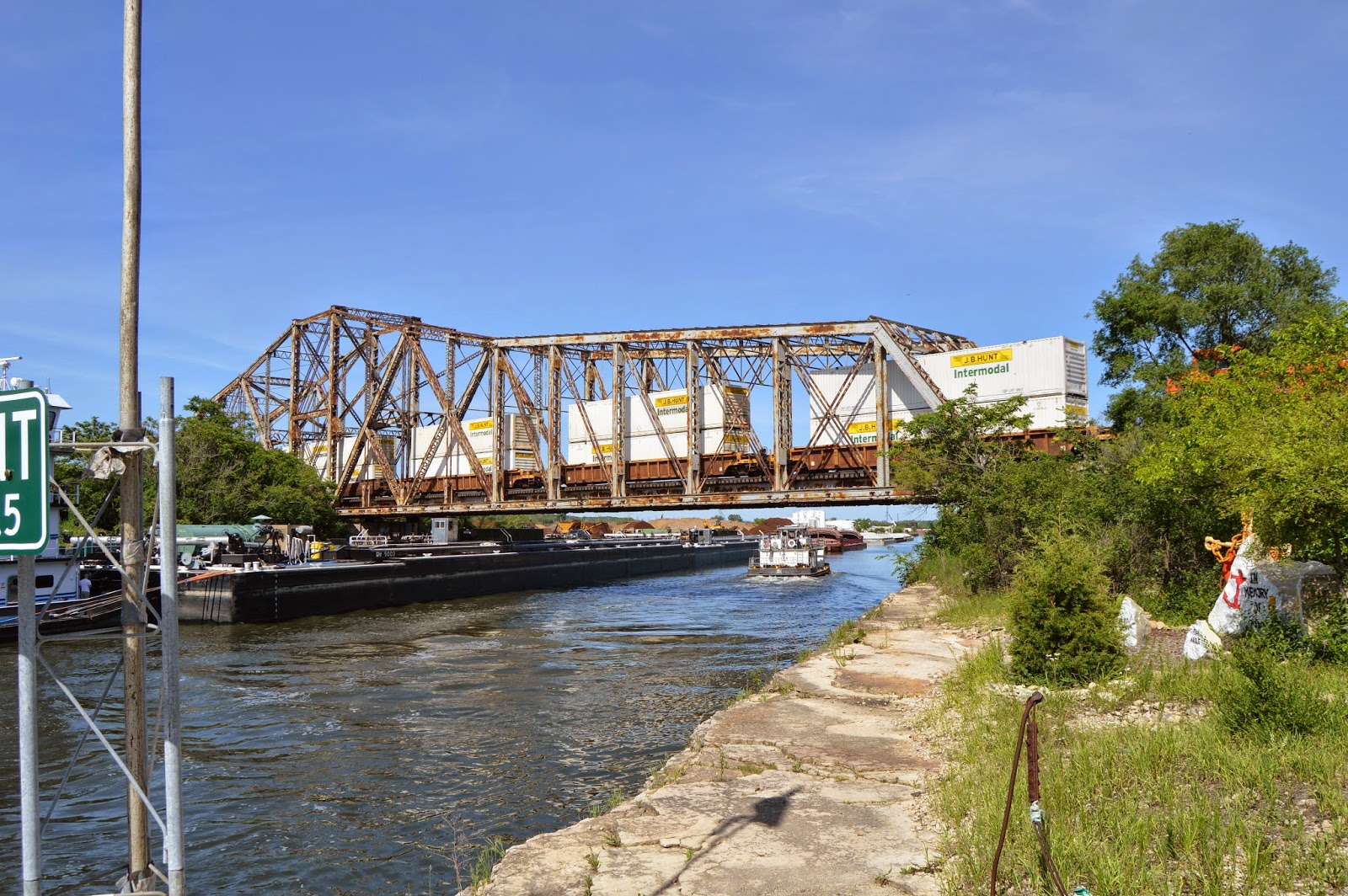 By looking at the pictures at full resolution with Paint, I was able to determine that the locomotive numbers were 6079, 1114, 672 and 4455. Using The Diesel Shop, that would be ES44AC, C44-9W and two Dash 9-44CWs. The 672 is the first 6xx unit I have seen in BNSF colors. The previous 6xx units that I have seen were still in the Santa Fe War Bonnet colors.

The shuttle ride from the powerhouse tour got stuck in the Lockport Days traffic jam going back to the parking area. We spent enough time on the Route 7 bridge that I was able to get pictures of a downstream towboat coming and going.

This is the first towboat that I have seen in this area that has a fixed height pilot house other than the above mistake.  So it was servicing an industry between here and the Santa Fe bridge.
Posted by Dennis DeBruler at 6:16 AM