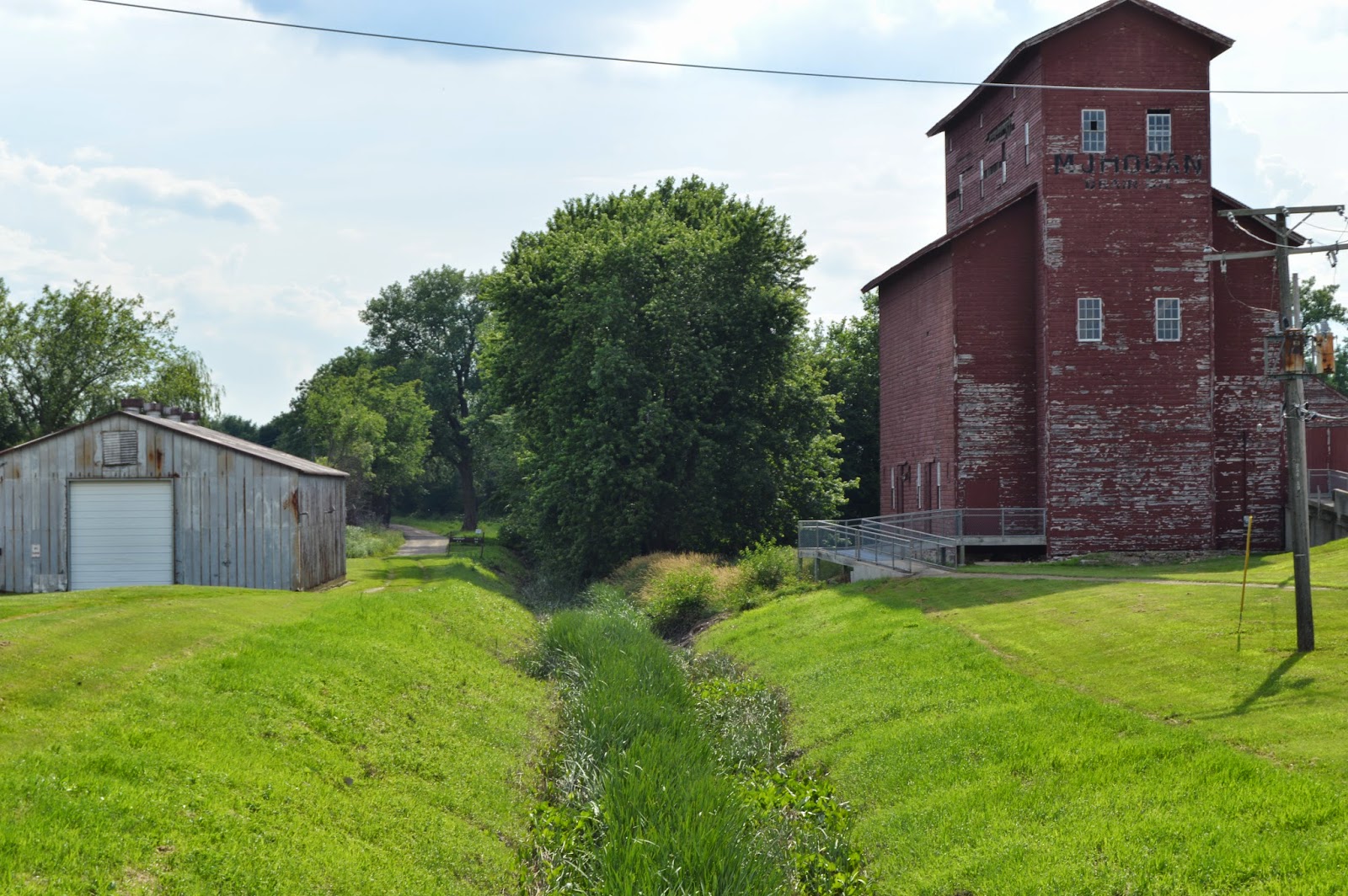 Mariana's comment:
Almost 12 years after its initial beginning, the Illinois & Michigan Canal was finally opened. It ran a total of 96 miles and allowed shipping from the Great Lakes through Chicago to the Mississippi River and the Gulf of Mexico. Photo was taken by Seneca, IL courtesy of US National Historical Landmark.

Notice the white grain elevator in the right background. Since the comment indicates the photo is in Seneca, this is probably the same elevator that sets there today.

The upstream view confirms that the canal is dry in this stretch. I wonder how wet it gets during a good thunderstorm. 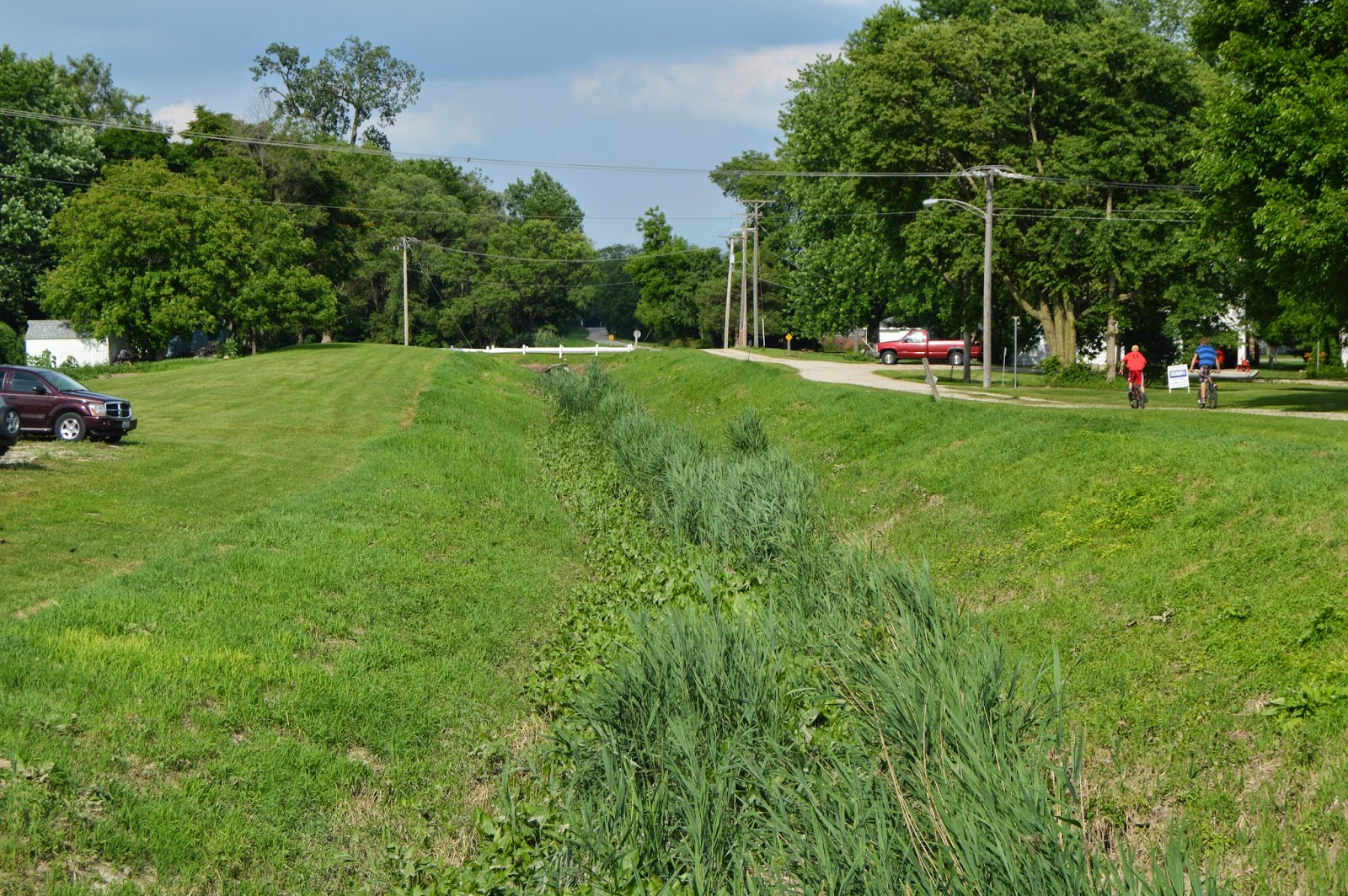 A three-quarters view indicates the structure needs some maintenance. I learned from Joe Balynas that it was restored in 2004 at a cost of 1.5 million dollars (old photo comments). I'm surprised that it has deteriorated so much in just 10 years. 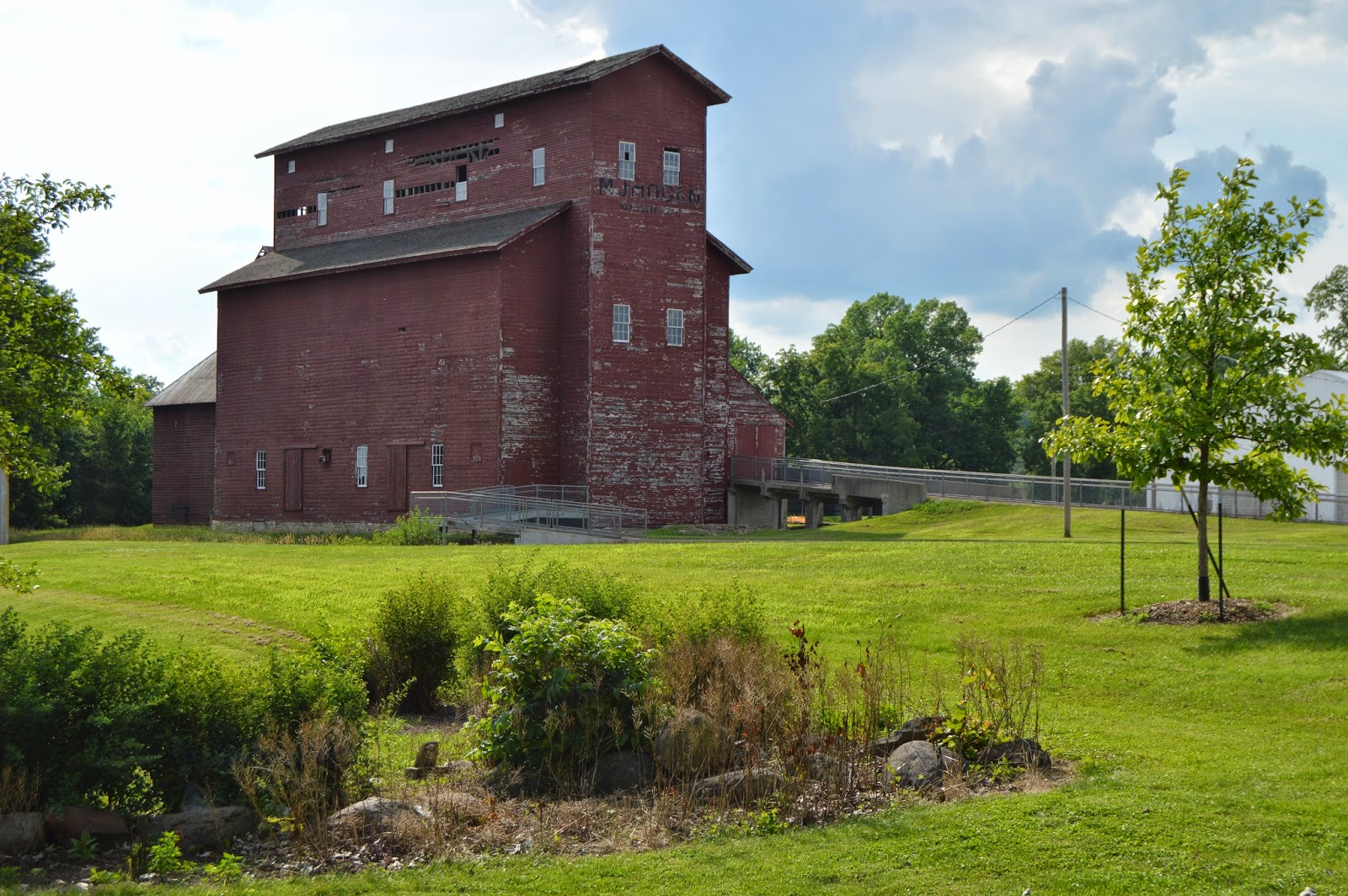 References call this structure the Armour's Warehouse because John Armour constructed this grain warehouse in 1861 or 1862 depending on the source. It was a warehouse because the grain was stored by stacking sacks of grain. Equipment to elevate grain and store it in bins without any sacks was probably added in the late 1860s or early 1870s. And the ownership changed hands several times. The current signage indicates H. J. Hogan, and that is why it is also known as Hogan's Grain Elevator, and it functioned as a grain elevator until 1988. The IDNR (Illinois Department of Natural Resources) bought it in 1985, but leased it to a local farmer for grain storage until 1988. They commissioned an archaeological investigation of the structures and land in 1986.

There was another grain elevator on the south side of the canal that was constructed in 1857 and enlarged in 1880, but it was demolished in 1942. The north elevator held 130,000 bushels. The storage consisted of corn cribs as well as grain bins. The machinery was originally powered by steam using cobs as well as coal. It was converted to electricity by 1924.

A view from across the street on the north side shows the other buildings associated with the grain elevator. 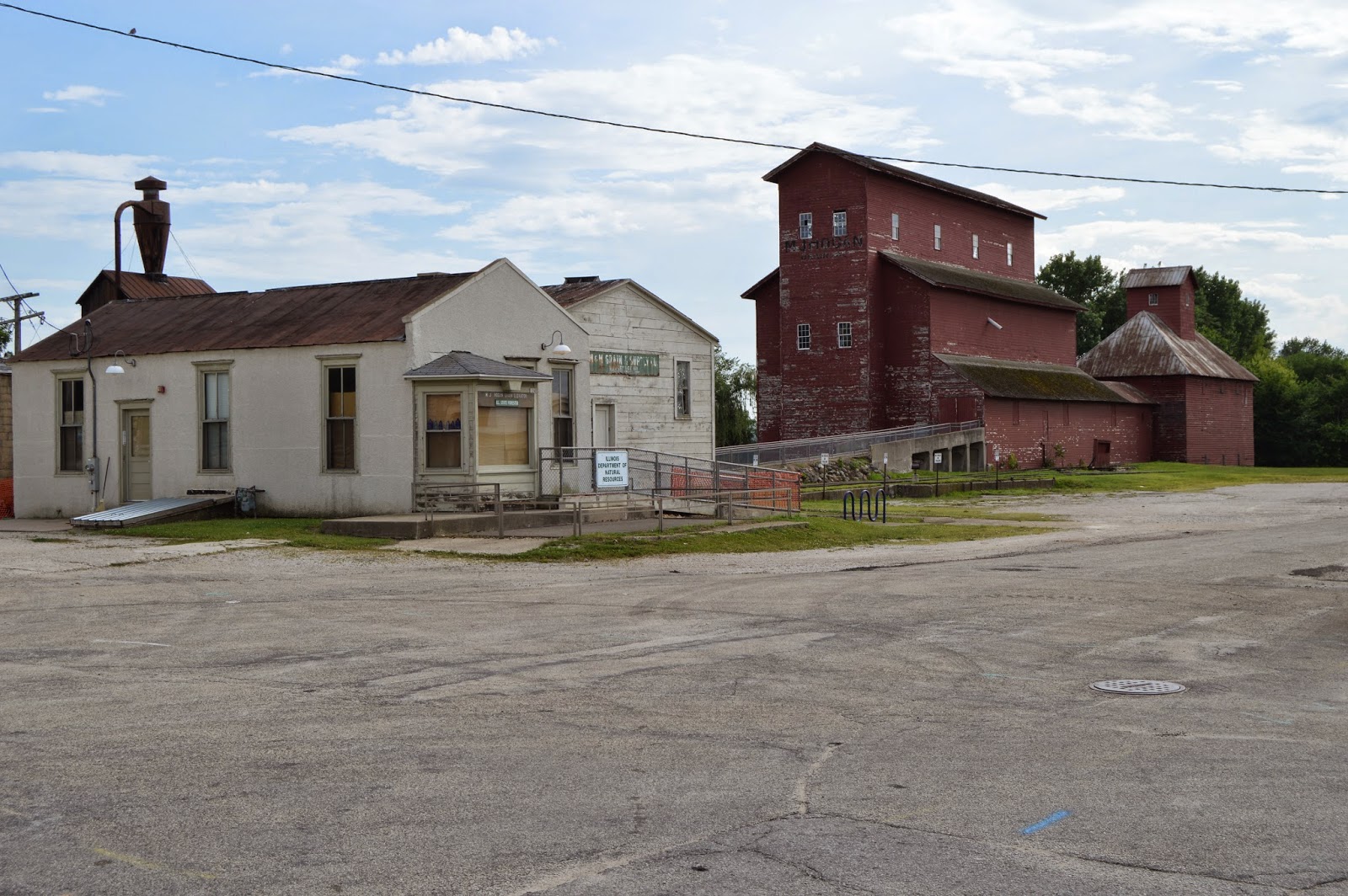 You can see the brown line of the railroad track just this side of the ramp and the dump shed. More on that later.

A close up of the office and seed warehouse indicates the current IDNR ownership. 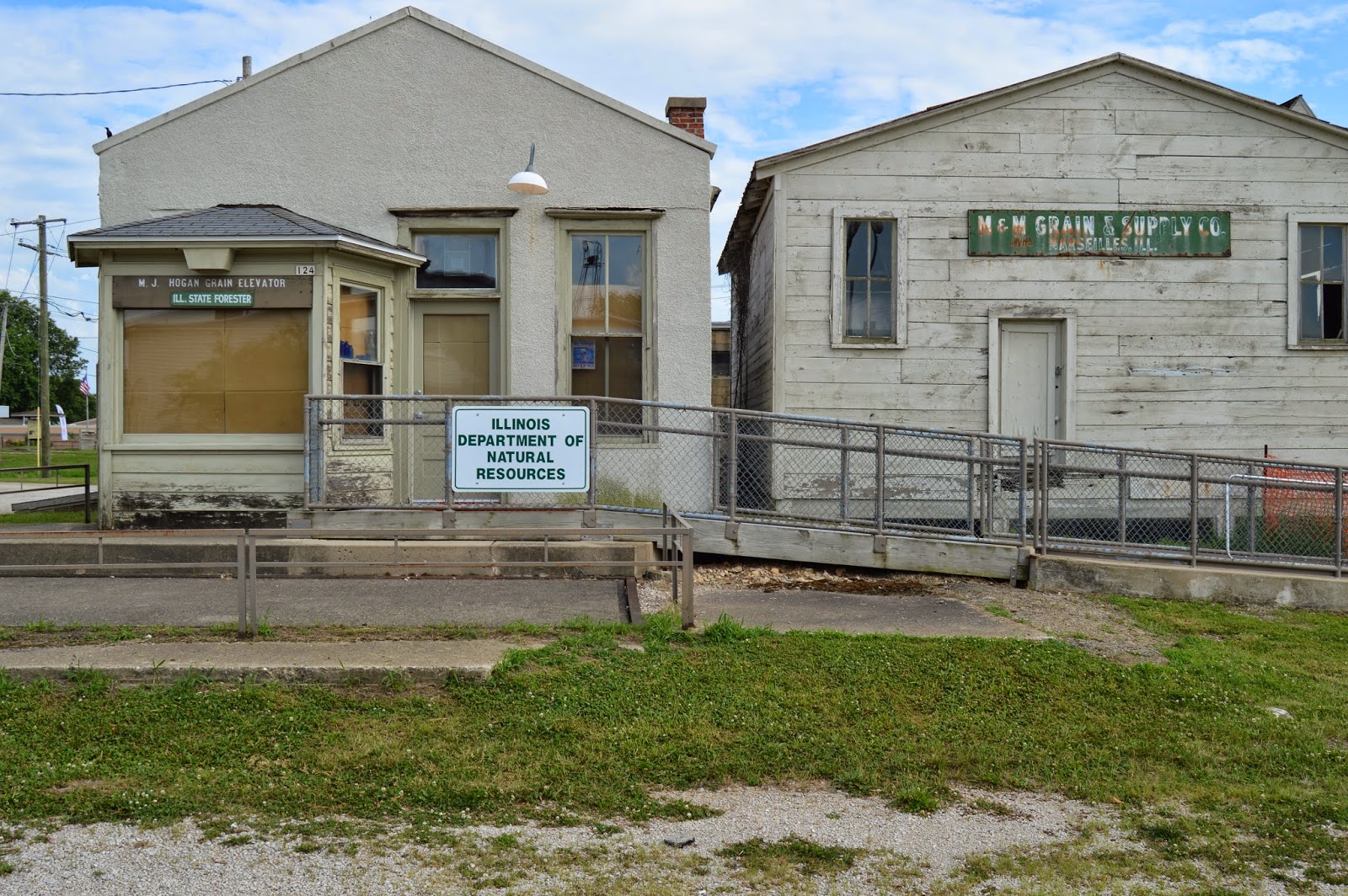 A site map of the current layout.


The railroad spur to the elevator was added in 1883. The track is still present, and you can see that the lead curves around to the North. In a satellite image, you can easily see the track by the elevator.


In the following, the red line indicates track that still exists at the end of people's yards. The blue indicates where the track has been removed, but the grade was left intact and it has become overgrown with trees. And the yellow indicates where the spur's grade has been completely removed by road and parking lot construction.

Where the red and blue lines intersect, these are the views looking south and a little east of North. 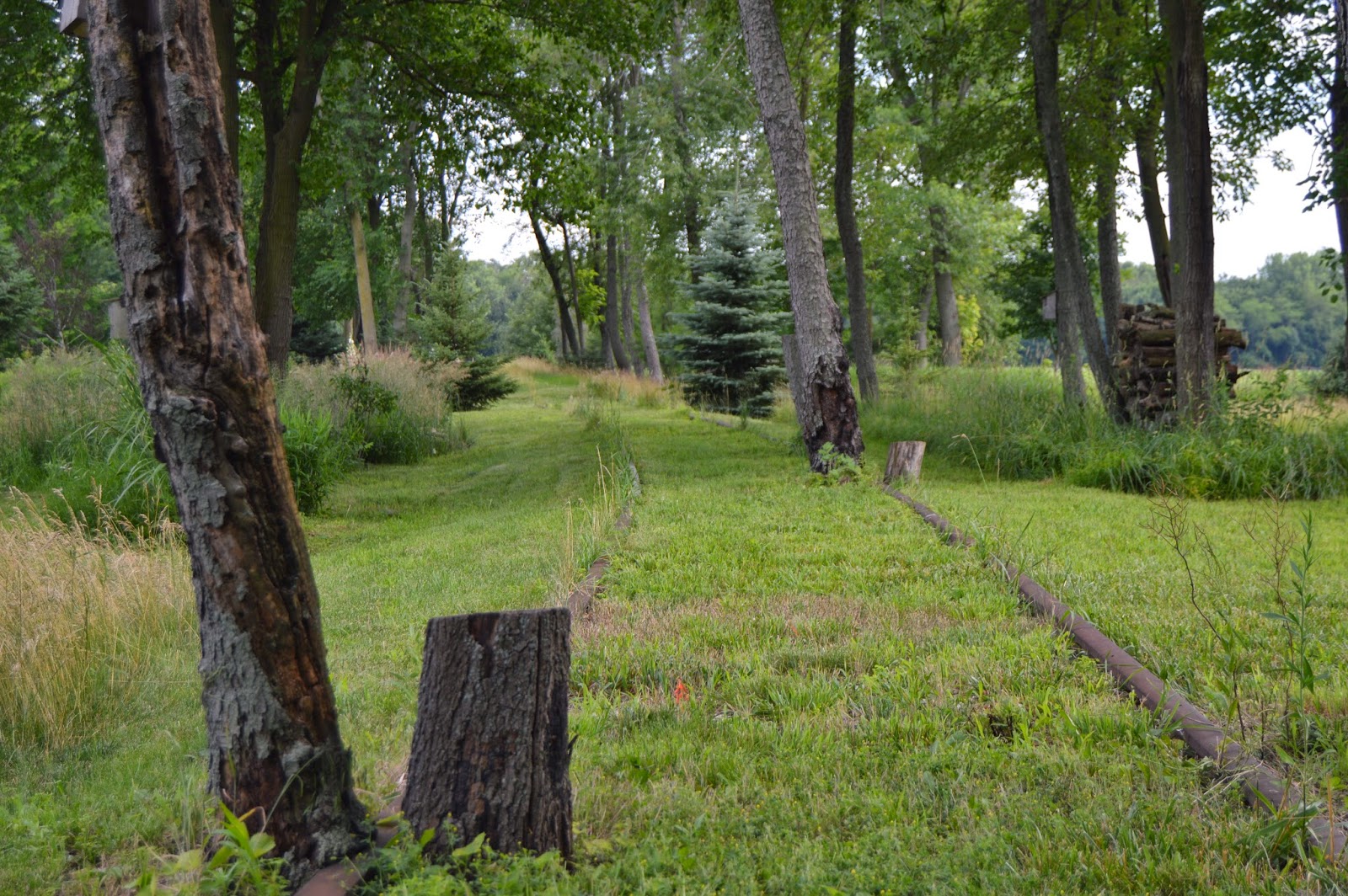 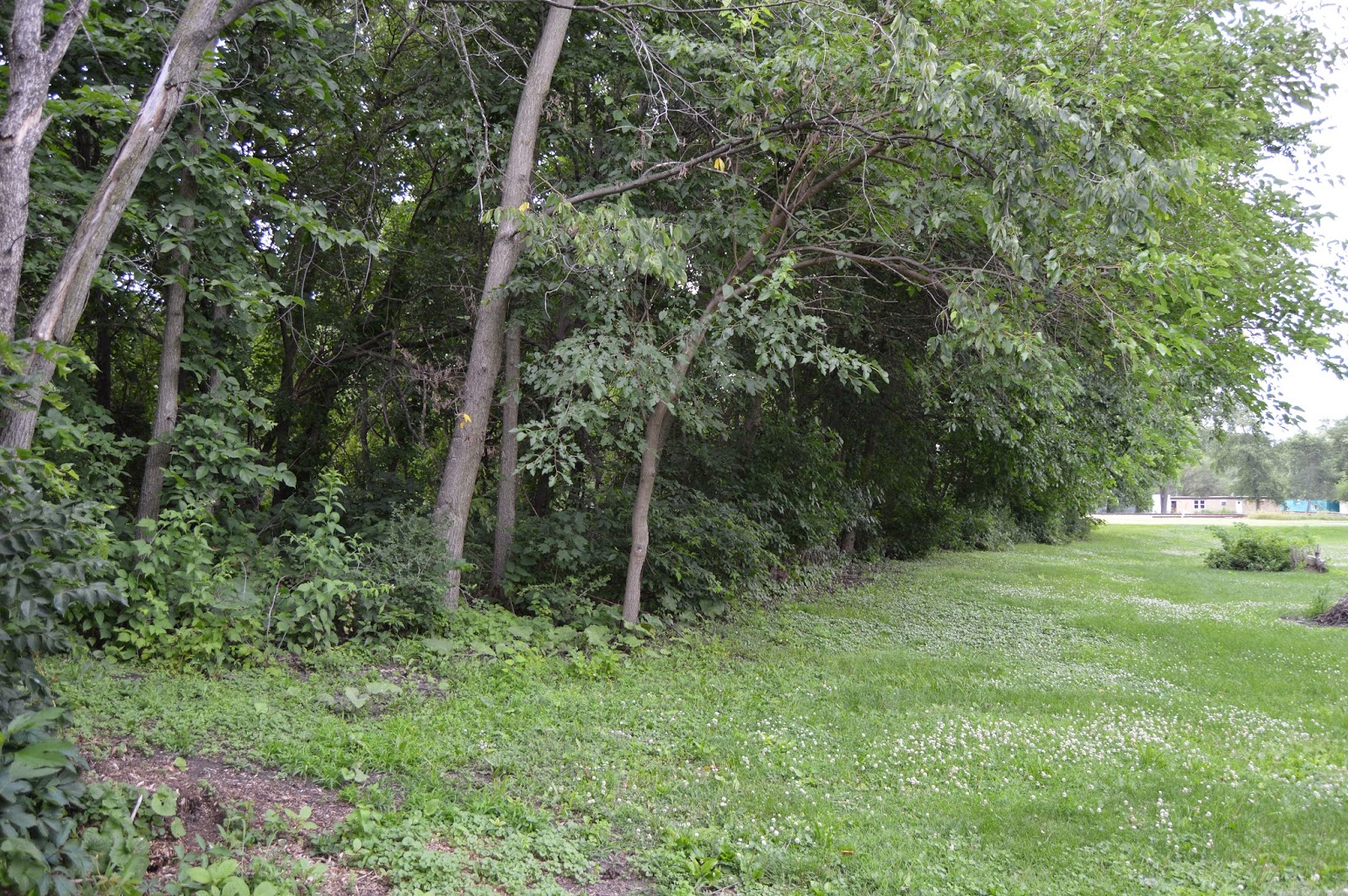 Near Main Street along the former Rock Island (now CSX operated) main line is the current grain elevator. You can see that grain shipment is still an important part of this regions economy. 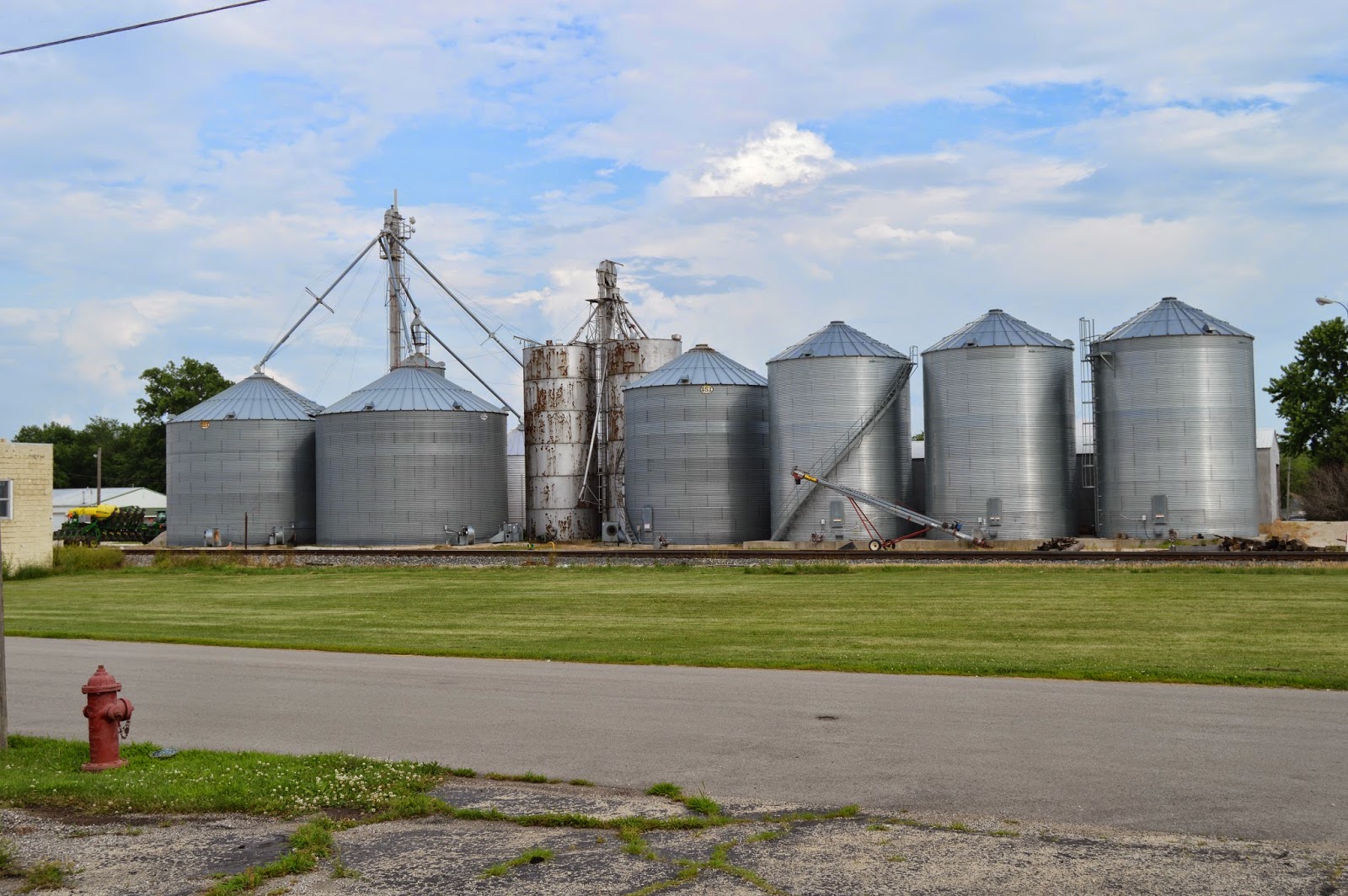 And what says farm community like a sprayer driving up Main Street? 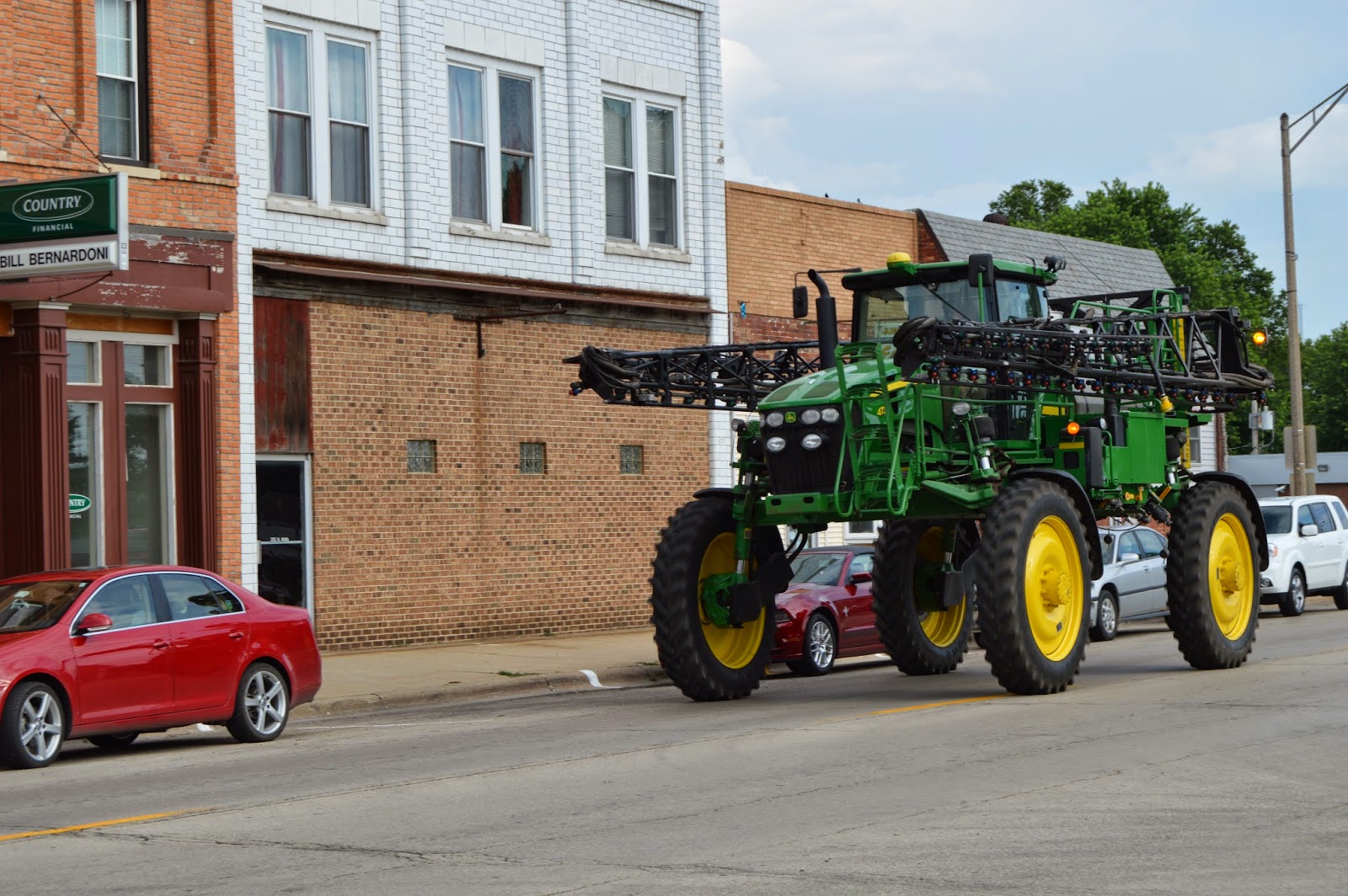 Christopher J. May posted two photos with the comment:

William Walper posted seven photos of the grain elevator.
Jennie Deck Severson Just an fyi...the grain elevator is not totally abandoned. It is still used as the backdrop for many many pictures, especially prom. Also they do offer tours I believe every Saturday if anyone is interested in seeing inside or learning it's history.

Matt Tabak posted a photo that shows a lot of side boards missing. But the comments indicate it is opened on occasion including tours during Shipyard Days.

Posted by Dennis DeBruler at 9:59 PM