Update: I found an IDOT site that provides info for this bridge. But now I'm left with the question of why was a relatively new bridge (2009) built with "intolerable" underclearance? After studying IDOT reports for some other bridges, I don't think it means clearance under the bridge for boats. I believe that is part of the "Waterway Adequacy" appraisal. Since Underclearance is NOT APPLICABLE for the bridge in Marseilles, which is a very similar steel girder bridge, I have no clue what underclerance means. Which is frustrating since it is "intolerable."

On my June 27 trip to Marseilles, I ended up traveling from Marseilles to Seneca on the south side of the Illinois River. I spotted a caboose near the river, so I got off the main road to take a picture of it. It turned out to be a private residence, so I did not take that picture. But I did find a nice riverside view of the Seneca road bridge.

The action on the river justified switching to the long-range lens. 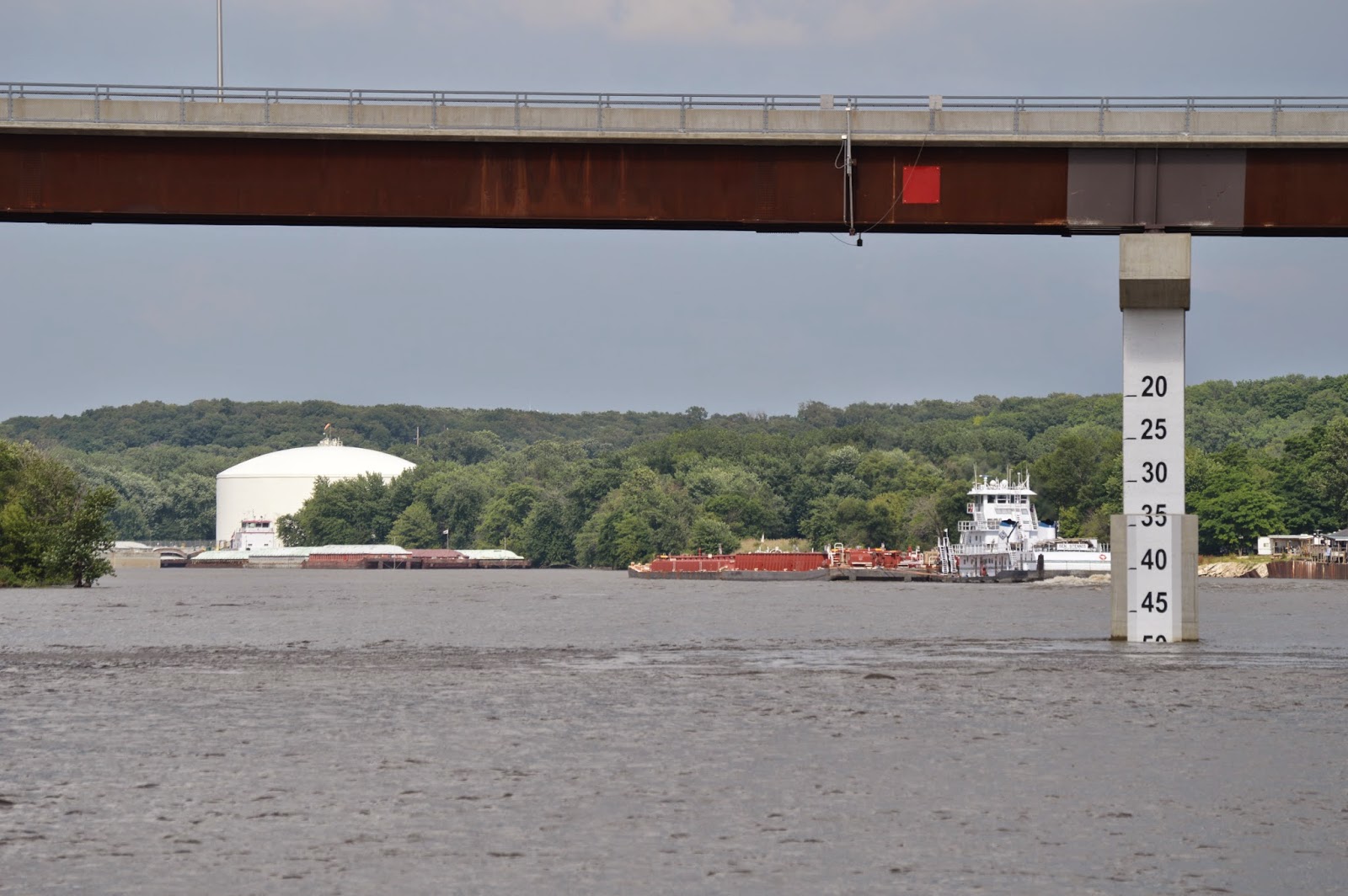 Note that the 50 foot clearance is on a day when the William G. Stratton State Park in Morris, IL, was closed because of flooding.

Yet another pier design for a modern Illinois River road bridge.

I'm glad I took some telephoto lens pictures because, even with digitally zooming, I could not find the side bolts for the field joints. But the following cropping from a telephoto picture shows that the plates under the beam are part of a field joint. It also shows that the pedestrian crossing is on the west side of the bridge. That is going to make it harder to try to get a picture of the railroad bridge from this bridge.

John indicated that the new bridge was to have a main span of 350-375 feet. (The distance of the right full beam seems smaller than the other two. And the beam in the middle is a little longer. Is that some sort of optical illusion?) The two short segments on each side are about half a beam. So the main span is about 4 beams. 350/4 is 87.5 feet. When I researched bending beams, I came across the factoid that beams were up to 26 meters long. Using a conversion tool, that is about 85 feet. One advantage of building a bridge across a navigable body of water is that you can ship the beams to the site using a barge. I wonder if these beams were transported by truck or barge.

I assume that the two red squares on the side of the beams are daytime clearance indicators. At first I was surprised that the piers were not protected by fenders. Then I realized it was reasonable to expect pilots to be able to fit a 110 foot wide tow between piers over 300 feet apart without a problem. I wonder if tows in opposite directions would avoid meeting under a bridge. Or maybe modern piers for these large steel spans are massive enough that they are effectively fenders themselves.

Posted by Dennis DeBruler at 9:55 PM