The red line in the following satellite image marks the remnants of the south millrace in Marseilles. Note that this image was taken before the Spring of 2013 because the cofferdam built to repair the dam is not present. 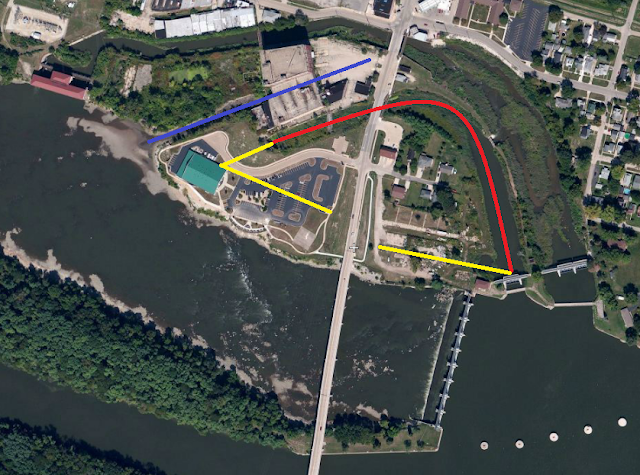 The yellow lines indicates what the full extent of the headrace might have been according to this 1911 map. And the blue line indicates the original tailrace, about half of which is still present.

The following pictures are in the order that the water would flow through the millrace.

When the Army Corps of Engineers built the Marseille Dam, they also built a new control structure at the entrance of the millraces. But the view of the south control gate is blocked by the control gates for the north millrace. The metal structures between the little red building and the big tree would be the top of south gates. This photo also provides a good view of the 4-foot dike that the Corps built on top of the levee after the 2013 flood. The building in the background behind the tree is the abandoned 8-story Nabisco carton factory. We will see more of that building as we follow the millrace through town. 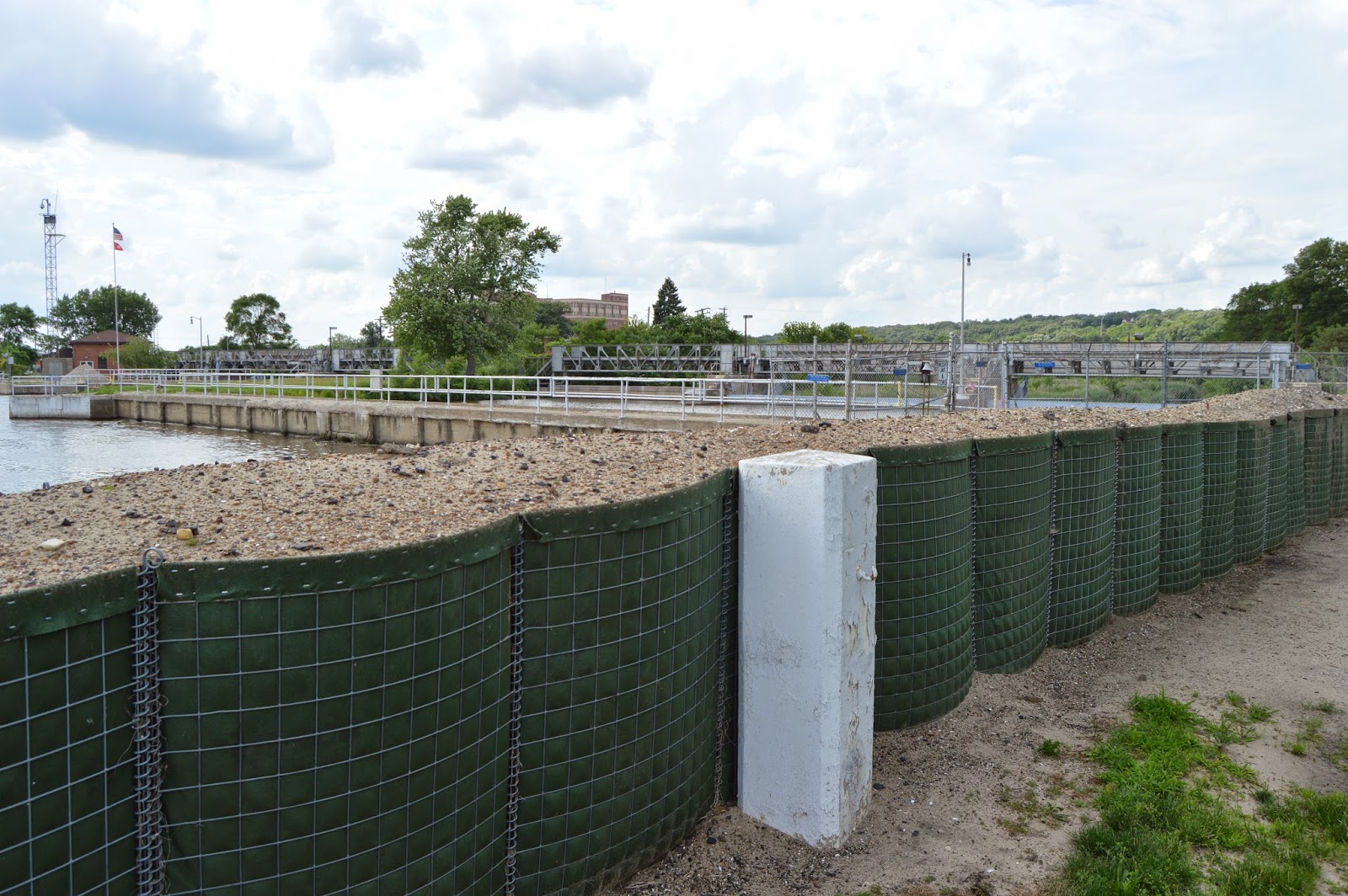 Our next access point is the Main Street bridge over the headrace.
Upstream and... 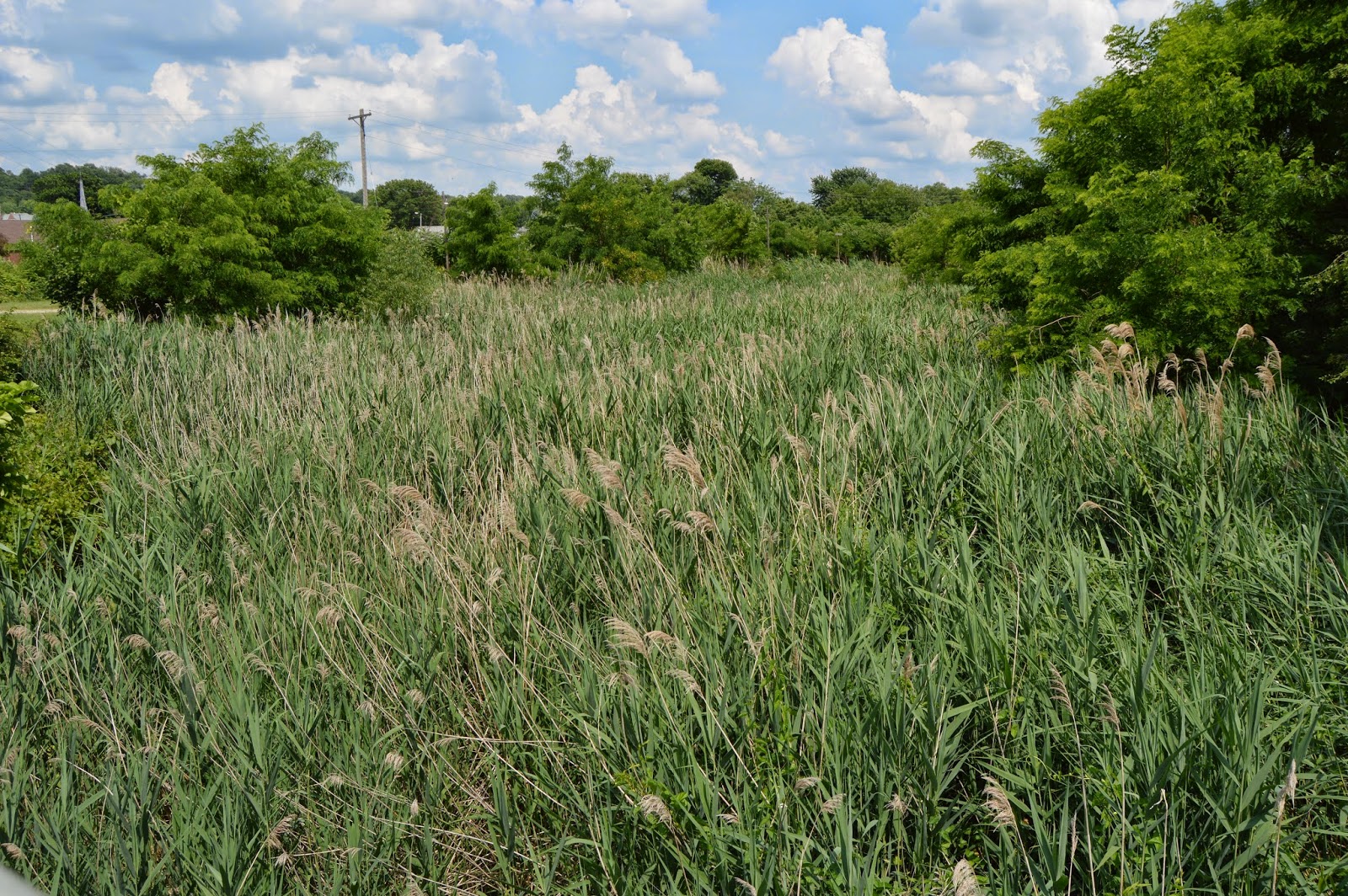 ...downstream we see the old 8-story Nabisco plant that I had mentioned. 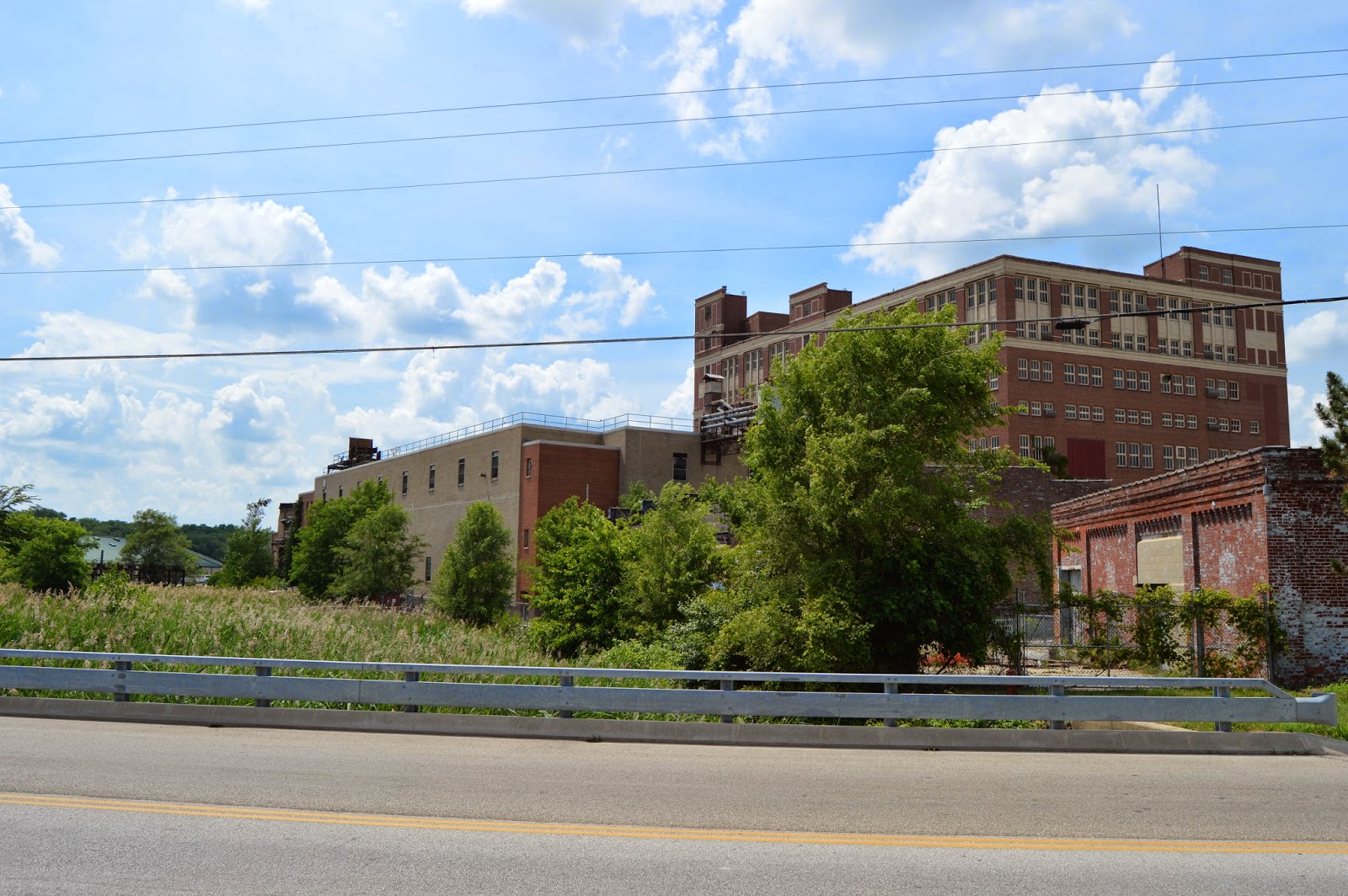 If you look closely on the left at the end of the cattails and below the roof you will see the top of the following control gates. 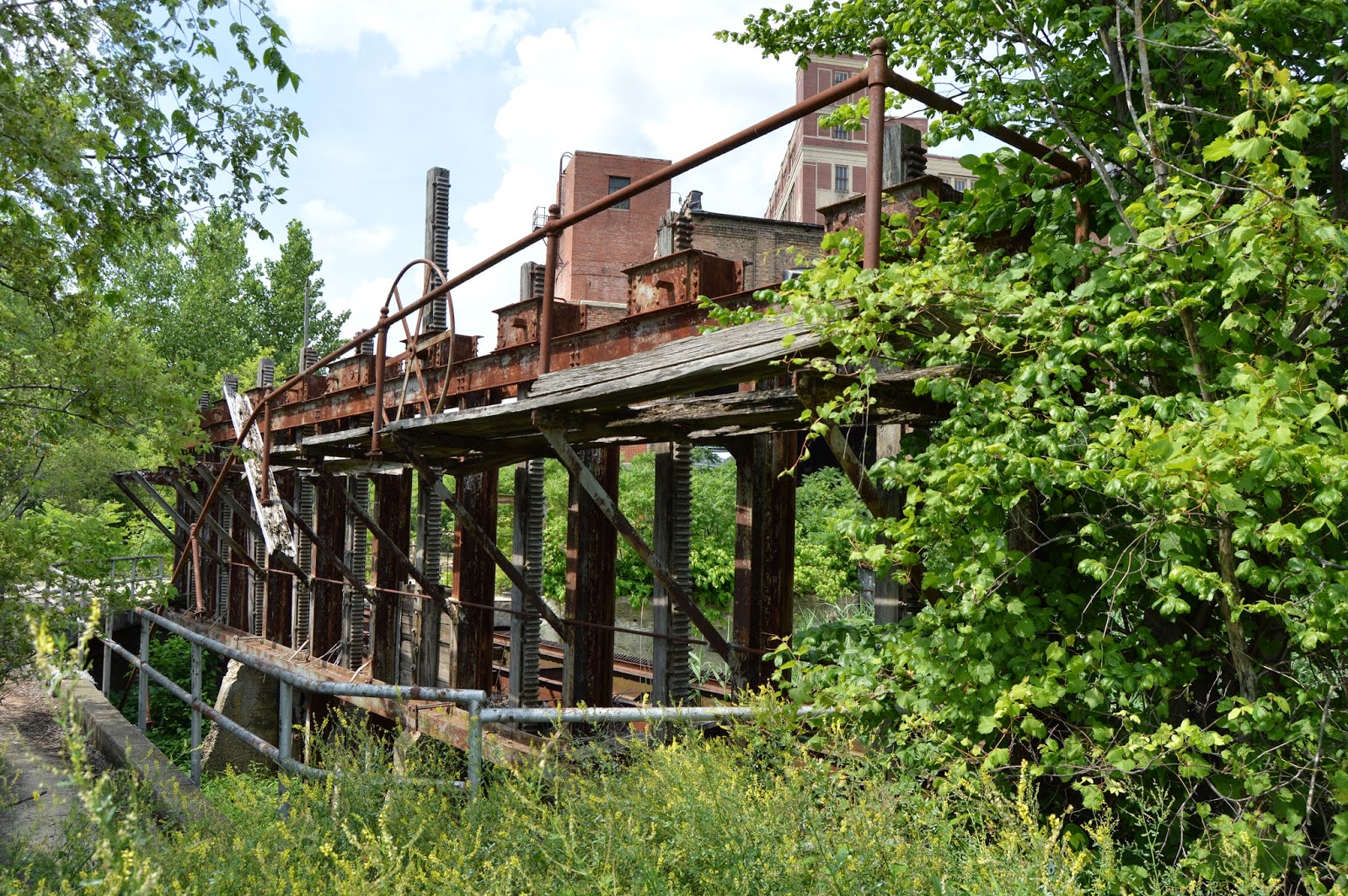 This picture is taken from the south side of the downstream side. Note that only one of the rack & pinion controlled gates still has its wheel and that it is the only one that is open. I took a closeup of the open gate because it is an excellent example of a sluice gate. It looks like the gates may be boards in a metal frame. 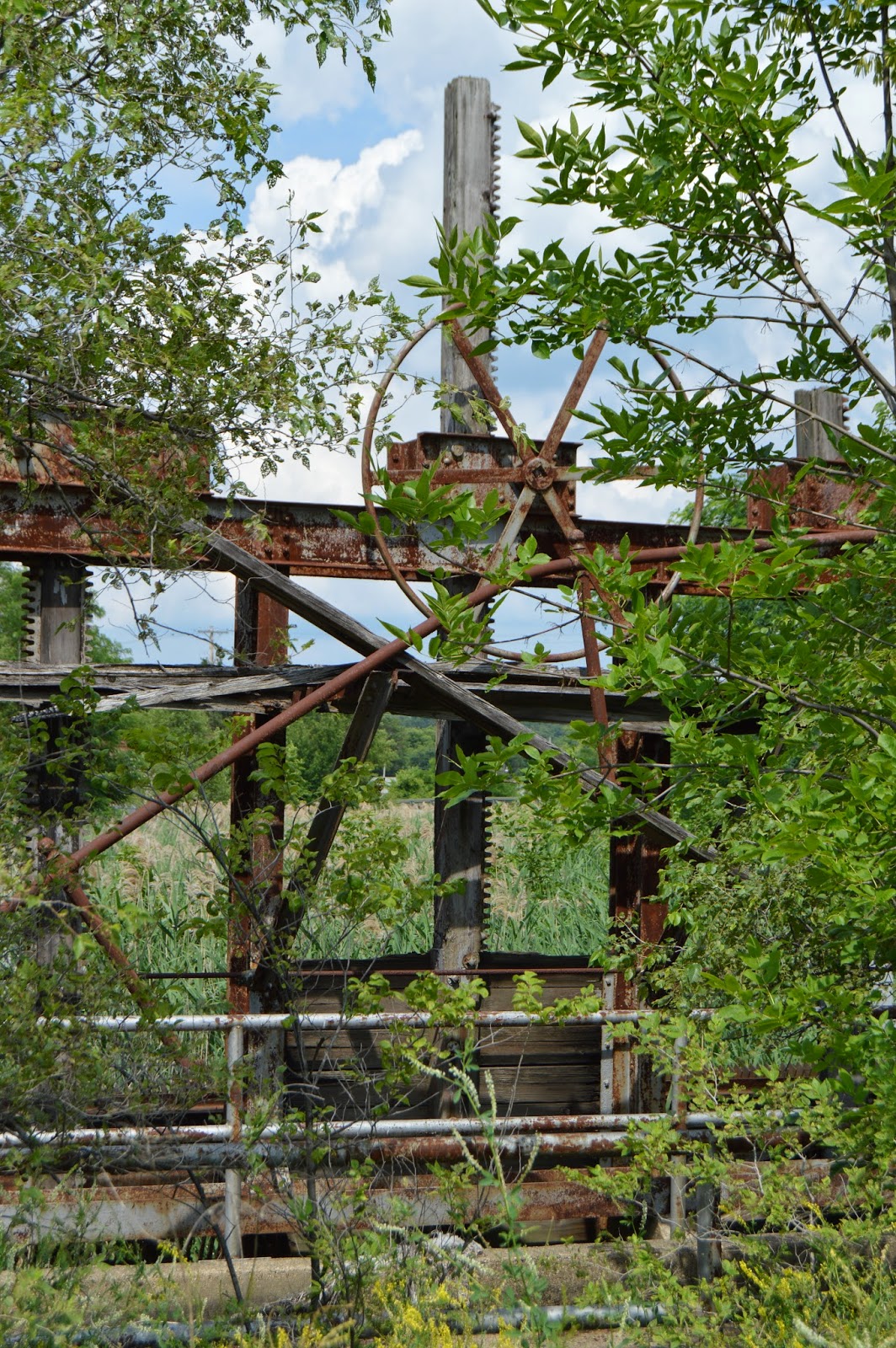 It is interesting to compare the above overview picture with one that John Weeks III took in 2008:

Specifically, note that the walkway and handrail were still intact in 2008. And his view of the headrace shows that it contained water back then and still had two bridges.

From the other side of the control structure... 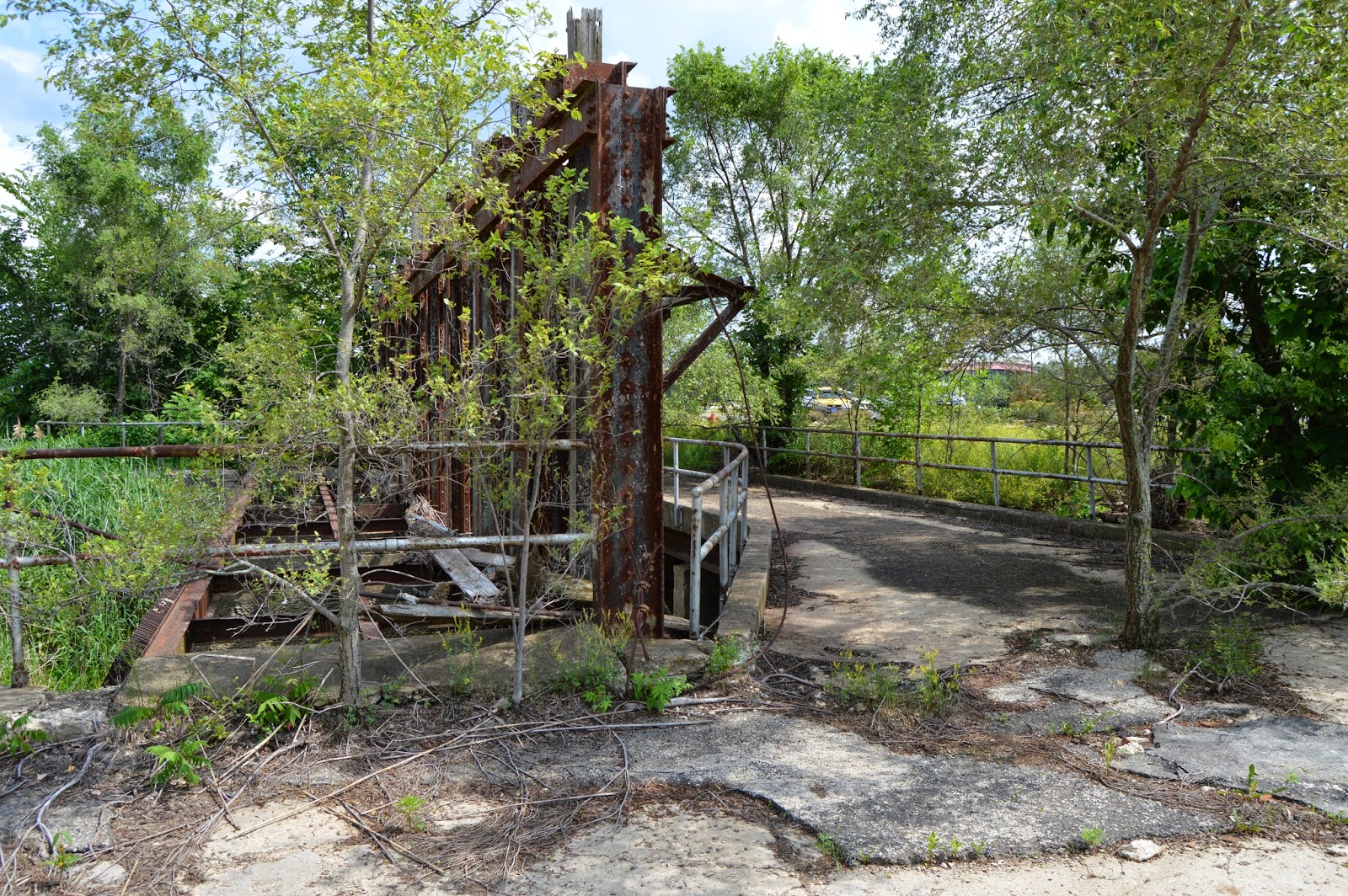 ...I turned 180 degrees to take a picture of a vacant lot. You can see the walls of the tailrace beyond the concrete floor of an old plant. 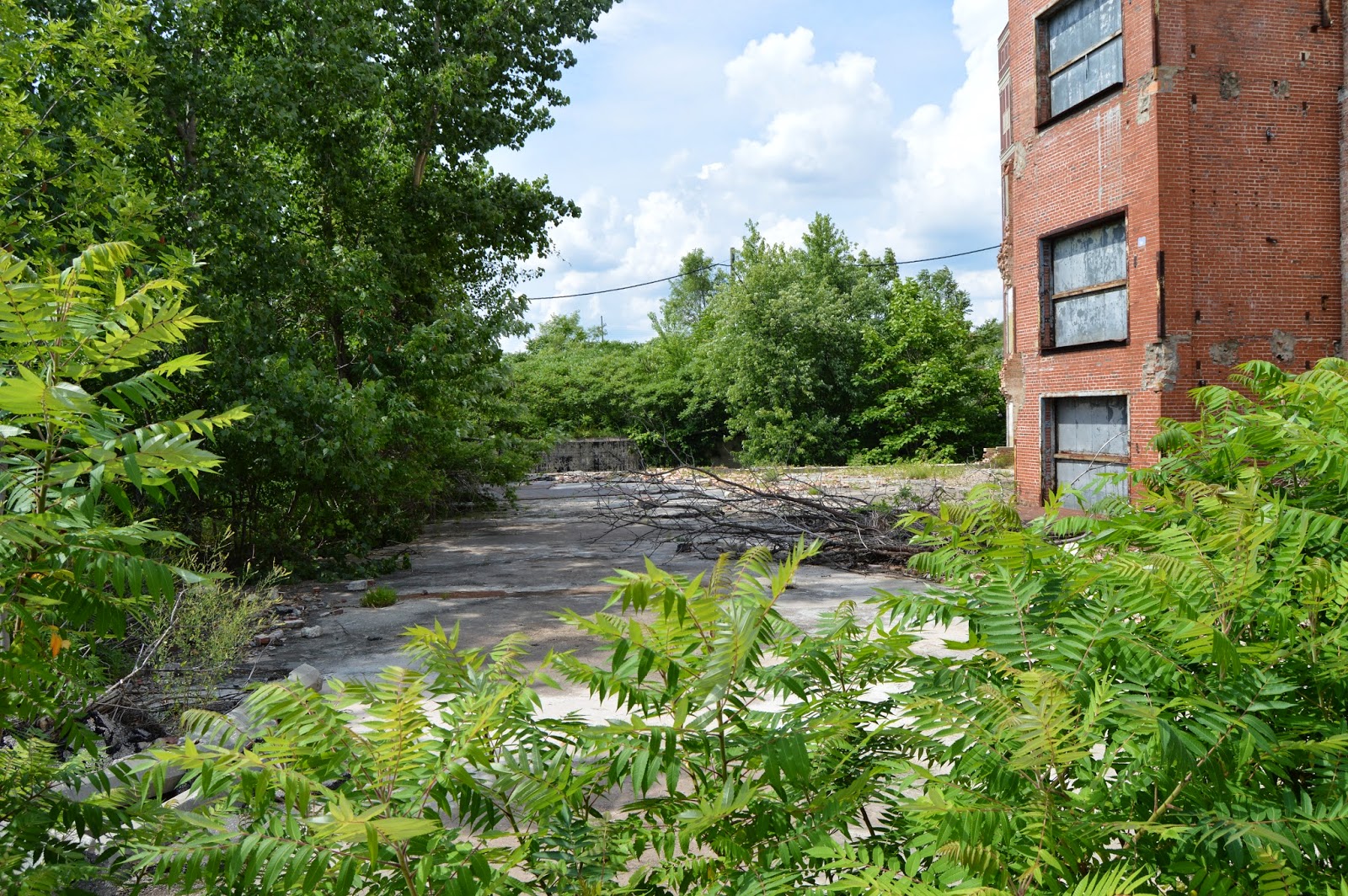 I was looking for holes in the floor where a water wheel below may have been connected to equipment above. I'm still confused how plants used water power in the early 20th century. They were evidently still using it because W. D. Boyce rebuilt the dam and millraces in 1900 or 1903. Did each plant have their own turbine and generator? Or were they still using water wheels, power shafts, and leather belts?

Turning about 45 degrees to my right, we see a remnant wall of the plant that used to be here. 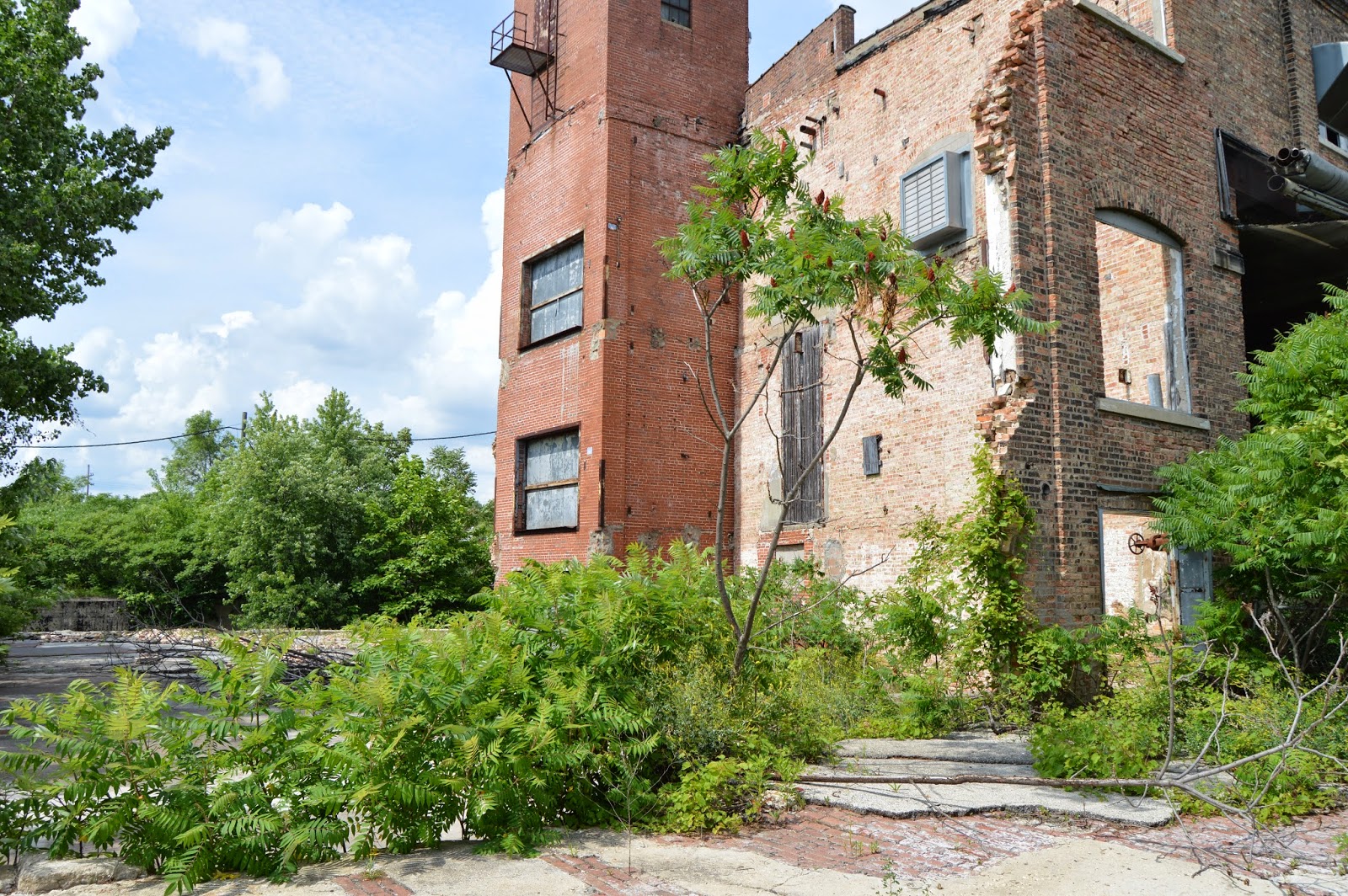 And turning some more, we see the cable controlled sluice gate that used to control the water being used by this plant. (The tree on the right of the above picture is the tree on the left of the below picture. I guess remnants being overgrown by nature is a plus as well as a minus.) 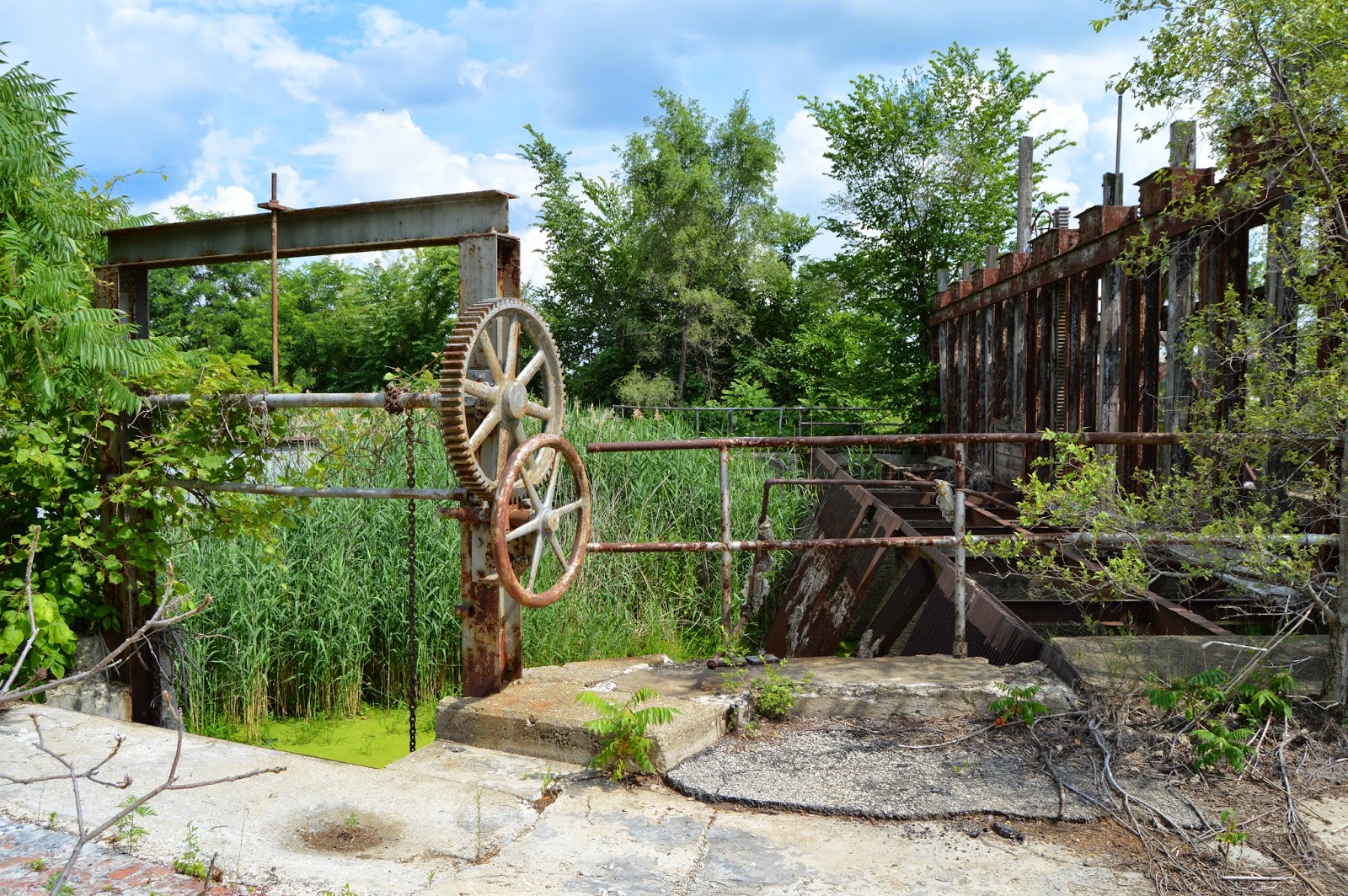 Since the rest of the south headrace has been filled in to make room for the Illinois Valley Cellular headquarters building and Middle East Conflicts Wall Memorial, we turn our attention to the tailrace.

In the following overview shot we see the headrace has been filled in just beyond the bridge next to the control structure we have examined. The trees in the background are growing along the tailrace. The tailrace flows into the Illinois River just beyond the headquarters building. 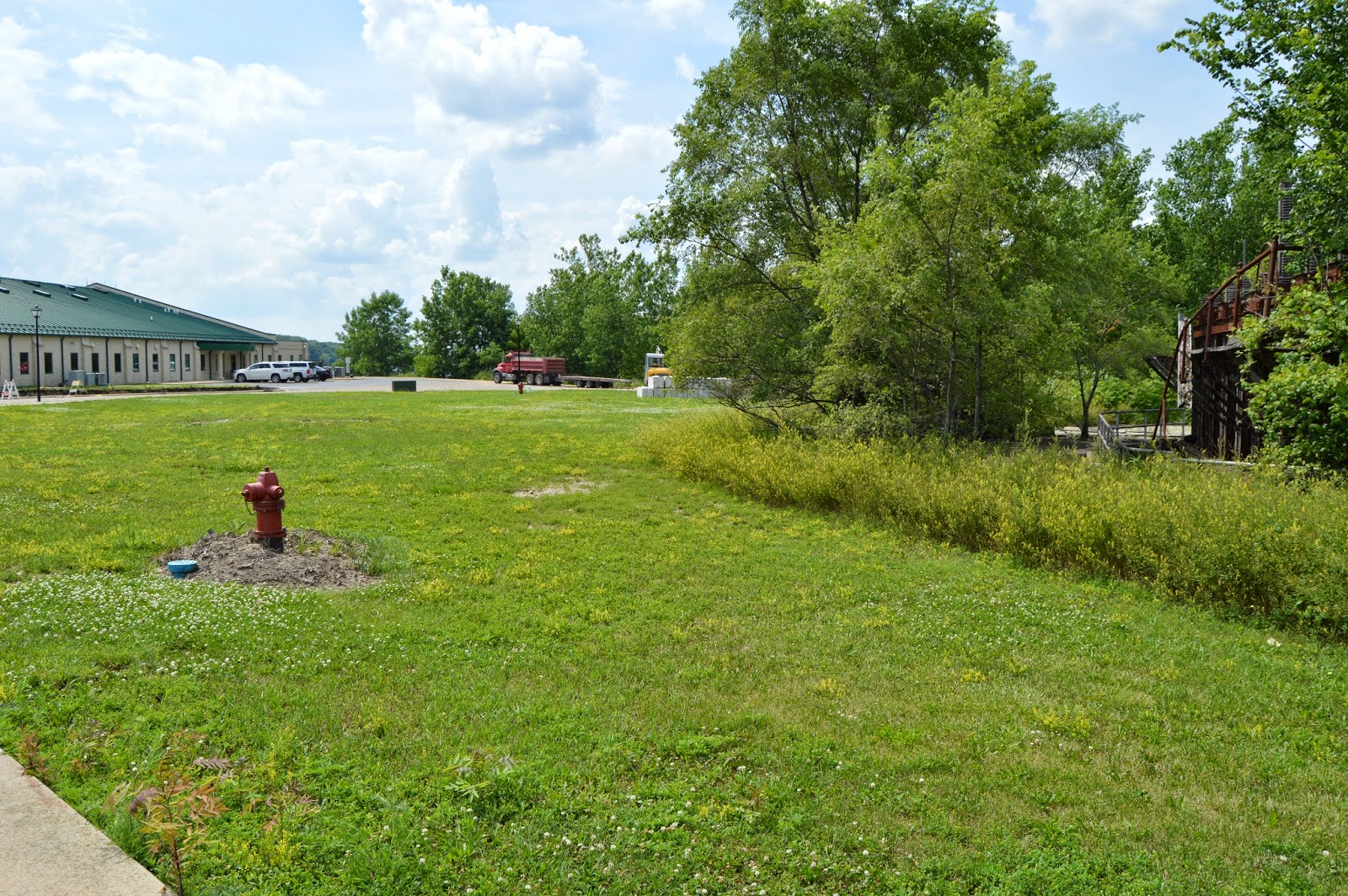 One of the slides in the video shows that all of the grass and parking lot in this view were underwater during the 2013 flood.

The following view is from the downriver side of the headquarters building. You can see the hydro power station in the background. There used to be plants all along the river between this tailrace and the power plant that were fed water from the north headrace. And the remnant in the left foreground was probably part of a plant between the south headrace and this tailrace. 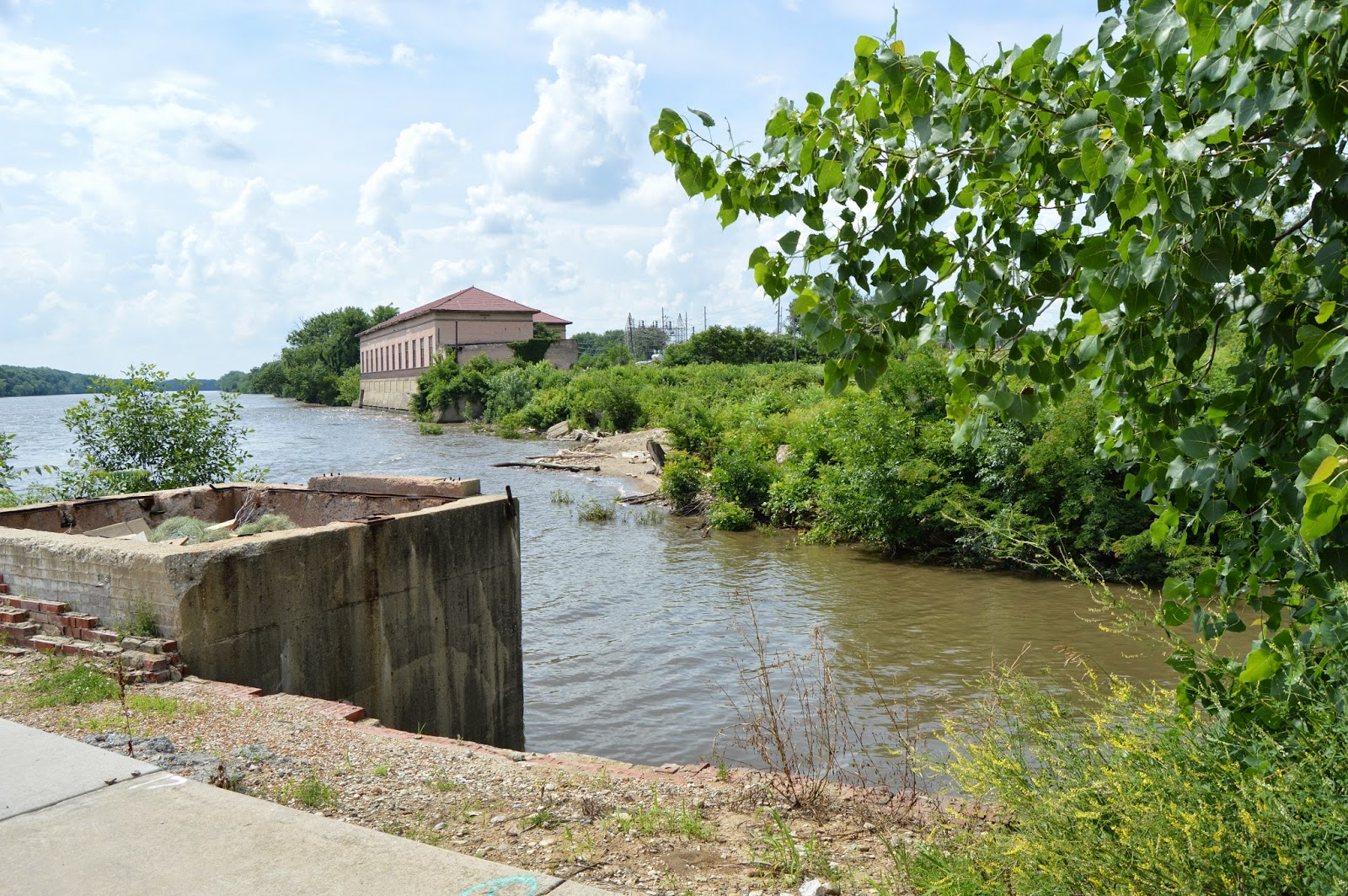 I got the following closeup near the tailrace opening to capture some of the foundation ruins that still stand. The pavers in the foreground are not ruins. They are part of the parking lot for the headquarters. 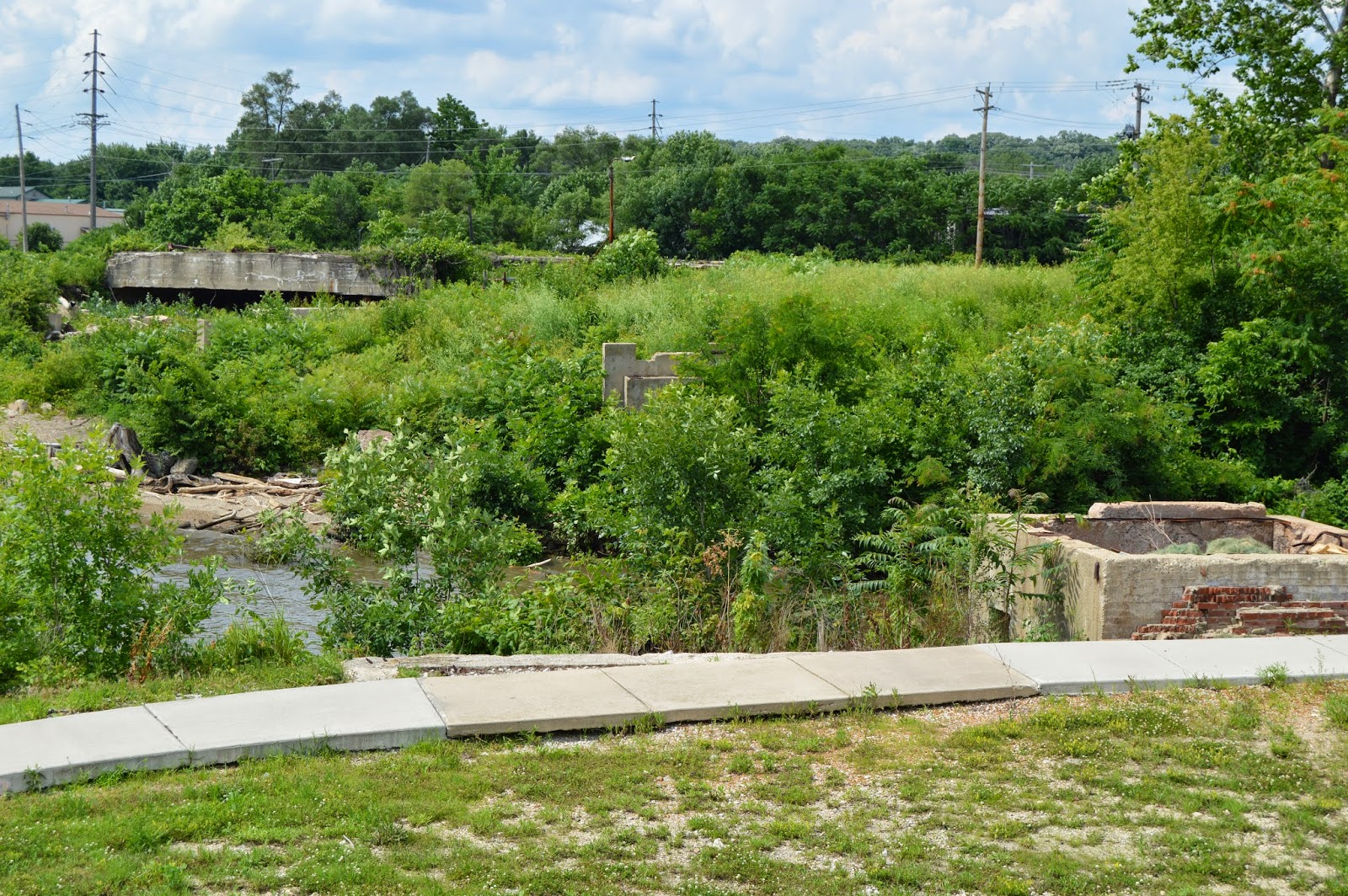 Posted by Dennis DeBruler at 1:45 PM