Looking at a map, it occurred to me that a walk along the trail next to Main Street in Marseilles is a trip through transportation history. Starting from the road bridge over the Illinois River, we see the bridge across the South Millrace and that the street "bends". 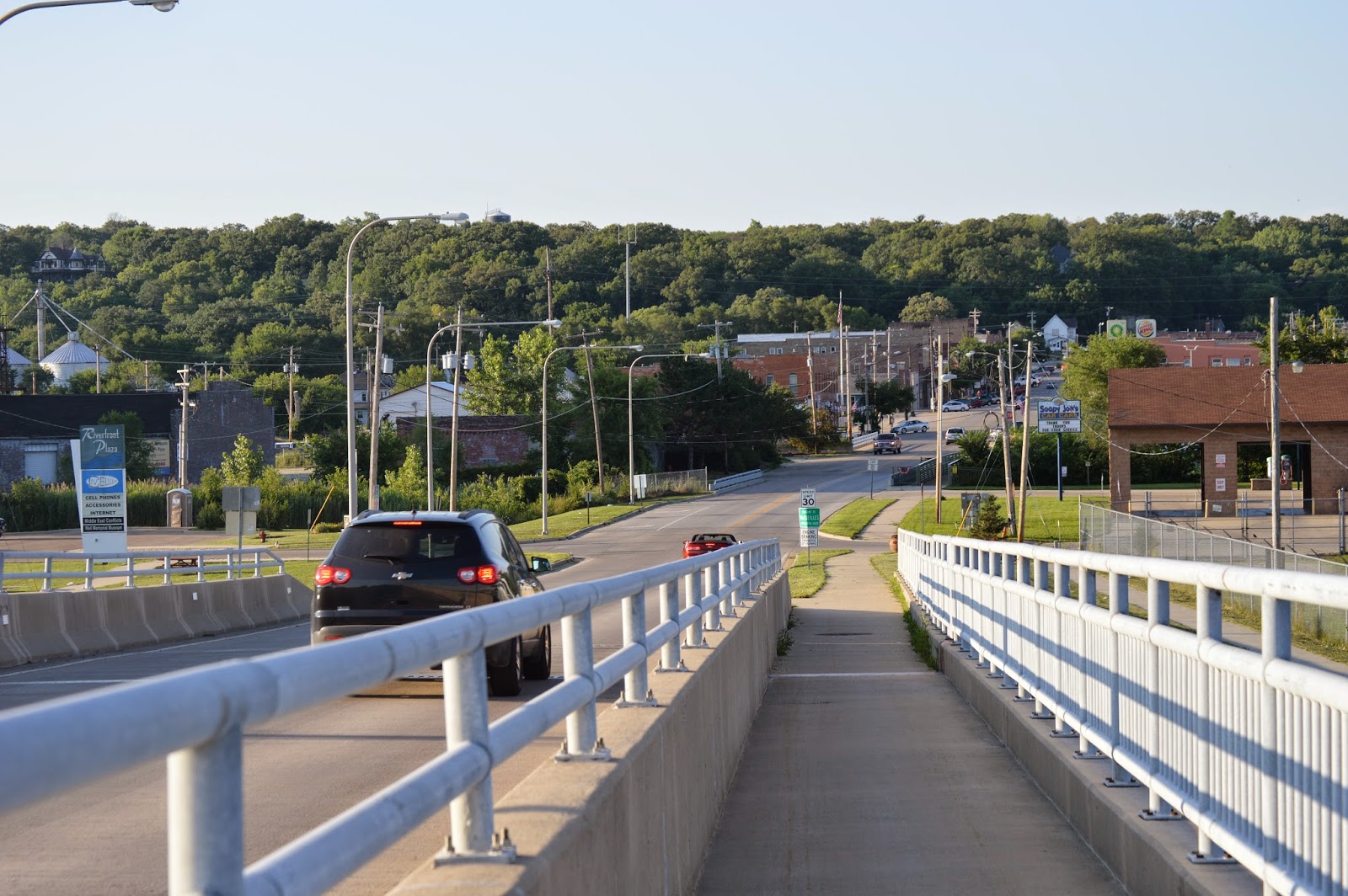 So I crossed to road for the next shot.

You can see the bridge for the North Millrace as well. The south bridge and the trail bridges across the north and south millraces were built since John Weeks III's 2008 pictures.

Next is the I&M Canal that opened in 1848, which is just this side of the red-brick building just beyond the Burger King store in the above picture. 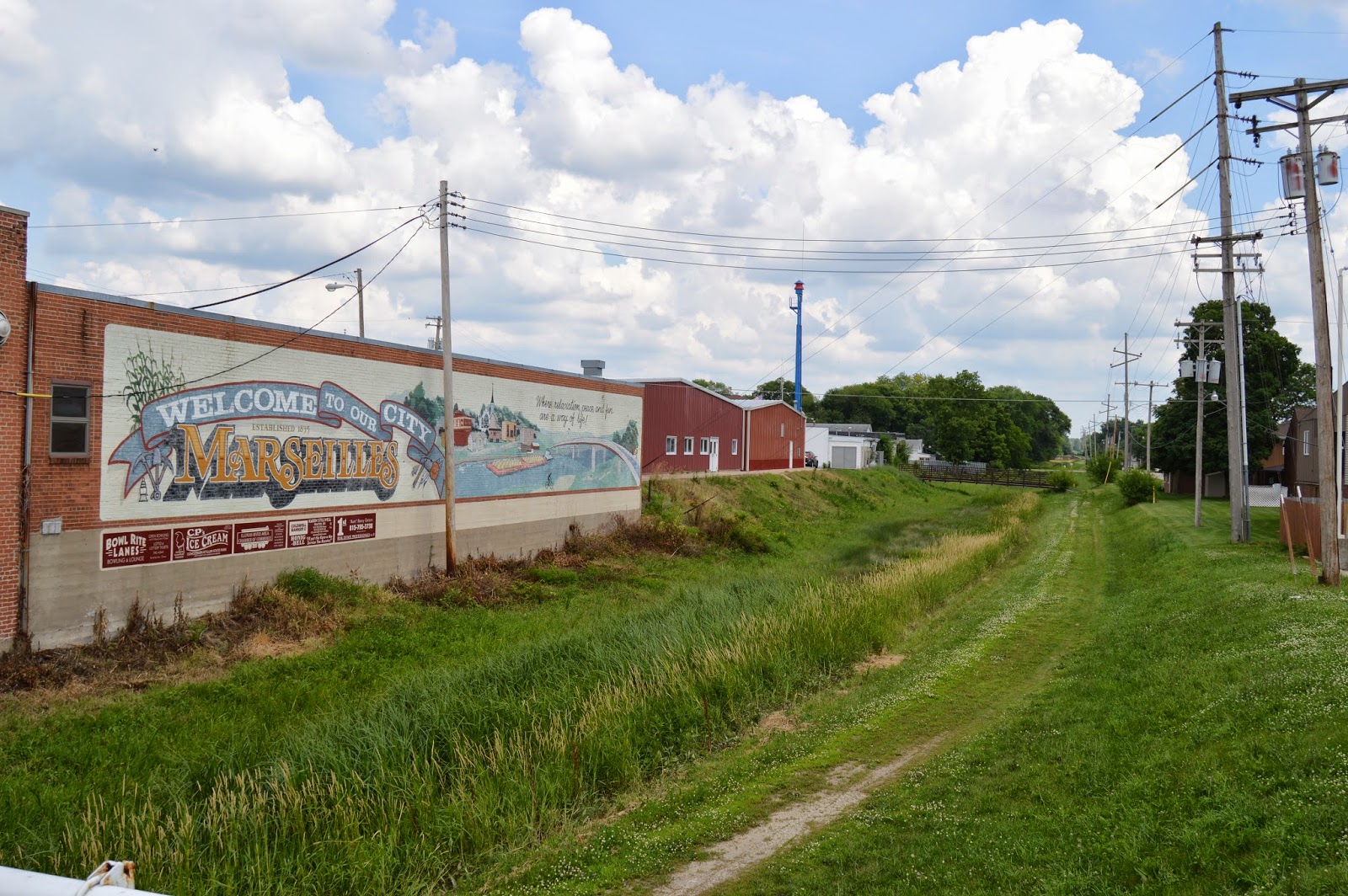 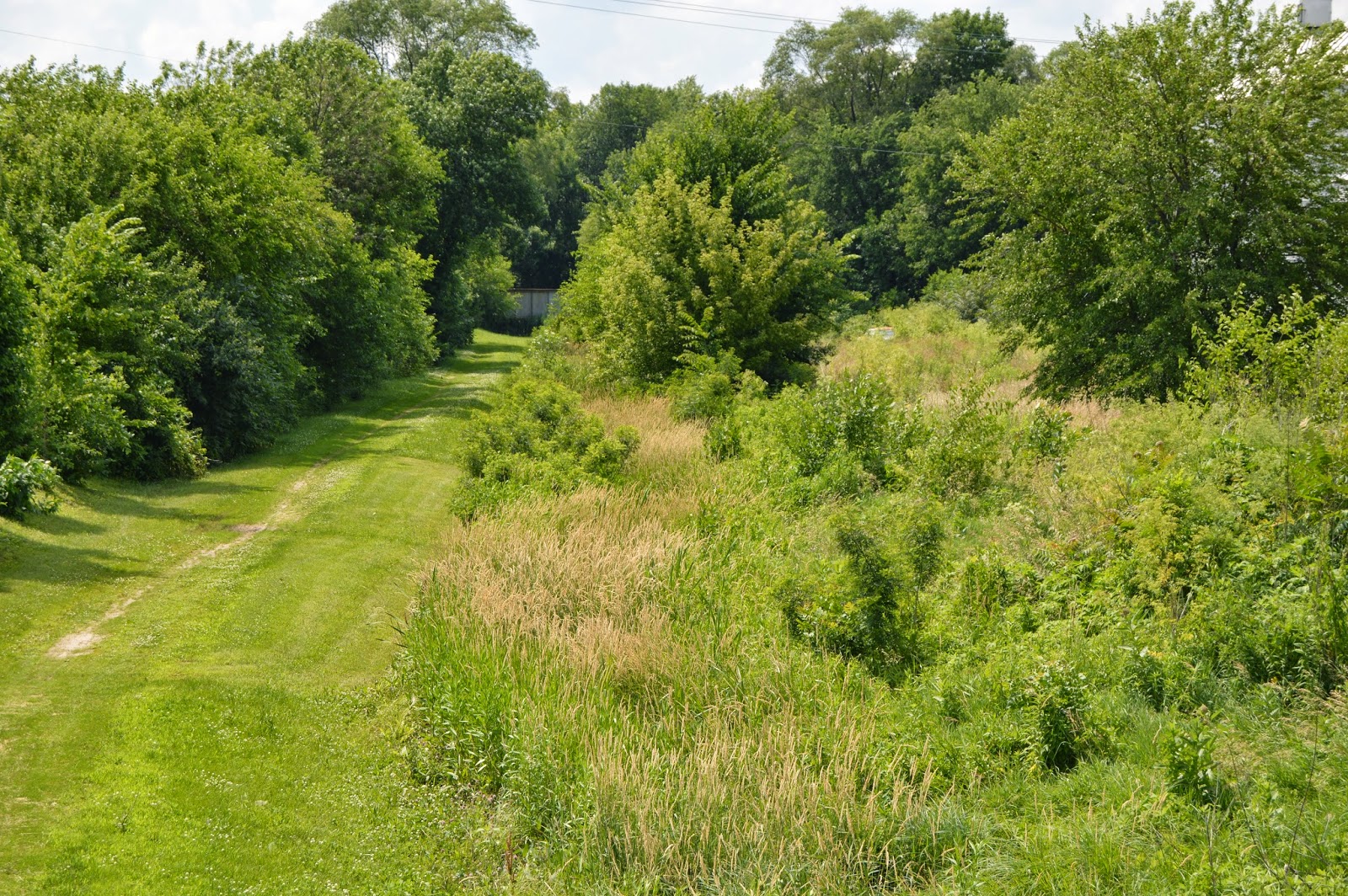 I got a closeup of the mural.

There is another mural a couple blocks north that is a collage. I didn't get a picture of it because it has way too much detail for a web site picture. They provide benches so that you can sit and study it for a while.

And I digitally zoomed in on the upstream view because I learned later that Lock 10 is just a few blocks upstream of Main Street. 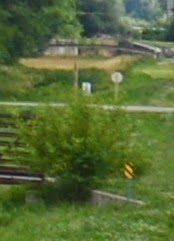 Next in our walk through history is the Chicago, Rock Island, and Pacific Railroad, which is now owned by CSX. It reached Marseilles in 1853 and Rock Island in 1854. "The canal soon lost all of its passenger service and most of its freight traffic, but continued to operate profitably for about twenty-five years because of the low rates it offered for lumber, coal, grain and other bulky freight." (Story of Marseilles 1835-1960, text) A doctor has preserved the depot as his office, and the Illinois River Area Chamber of Commerce has preserved a caboose west of the depot.

From the northwest quadrant: 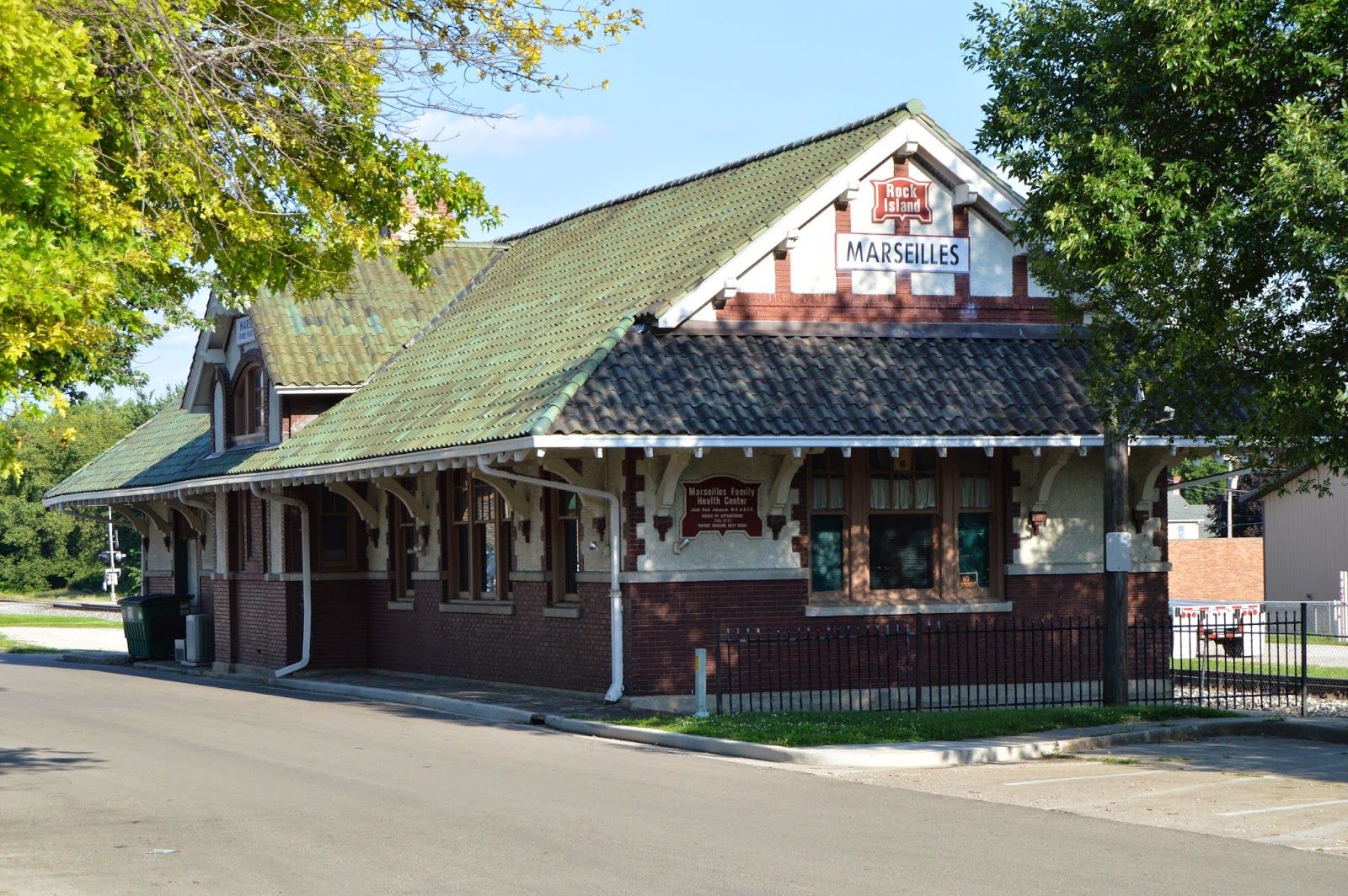 From the southwest quadrant, the passenger side of the depot. 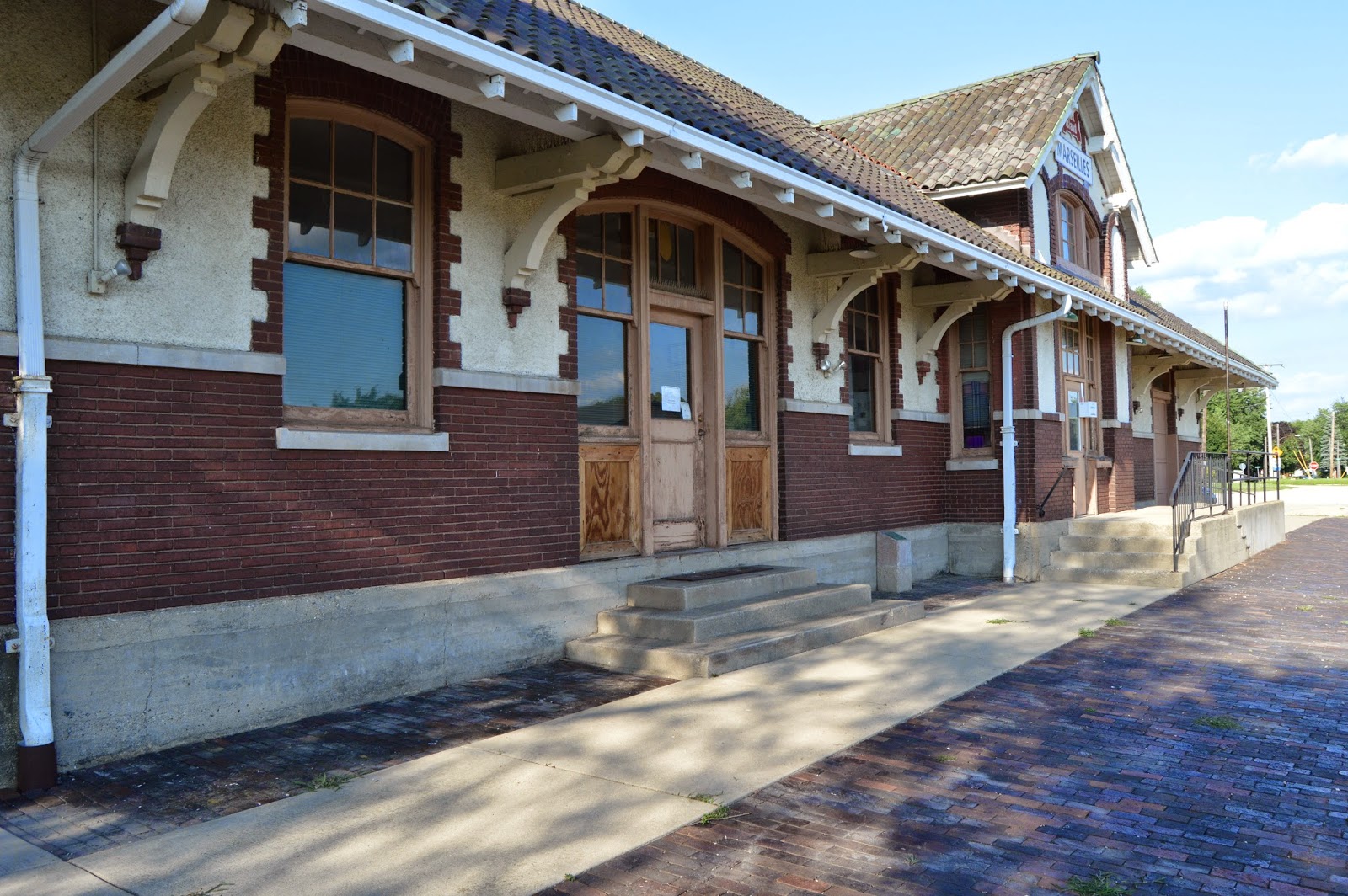 From the southeast, the freight house side of the depot. The preservation of a freight cart, milk can, barrel, etc. is an especially nice touch. 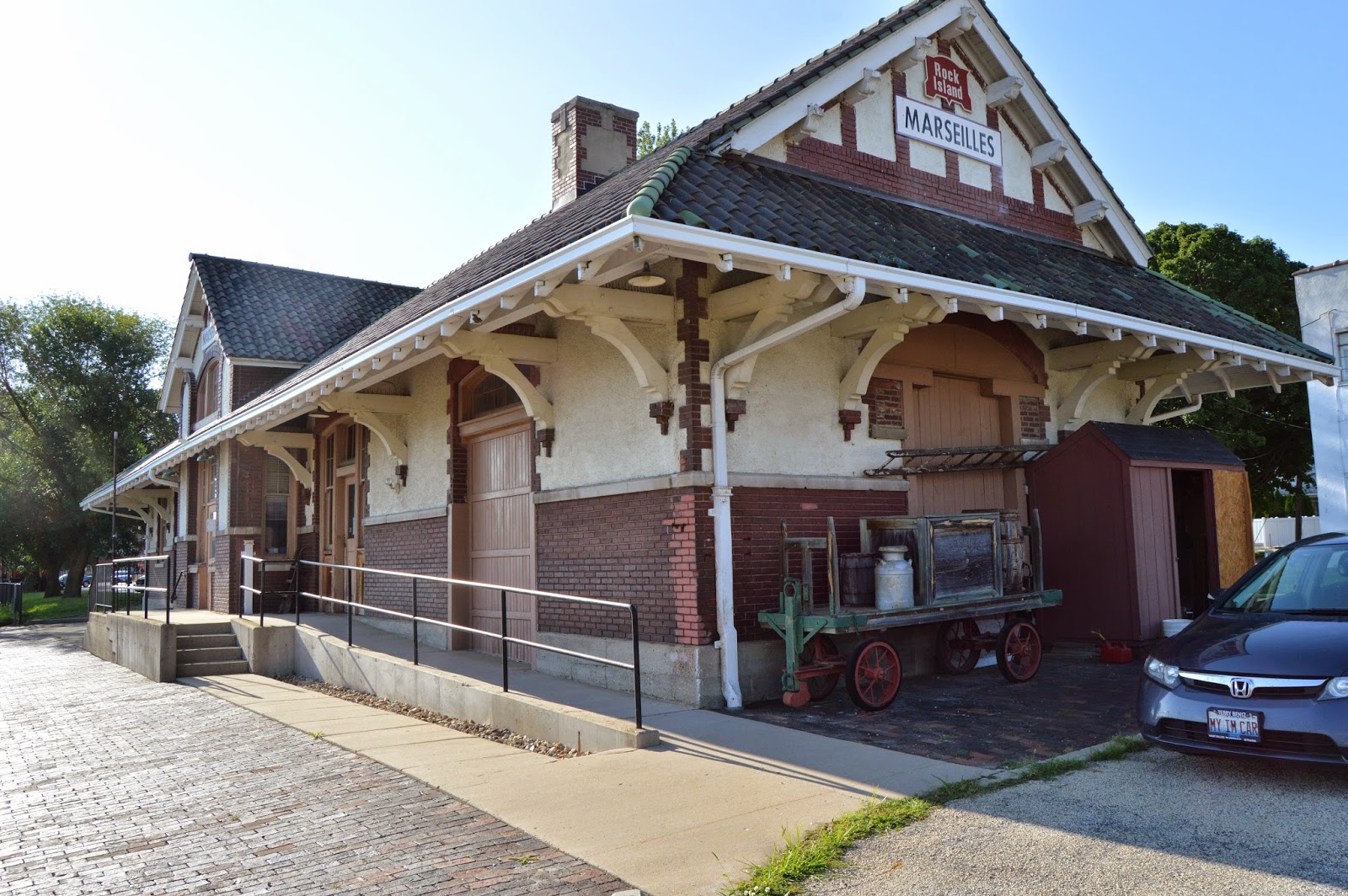 Next on our stroll through history is US Route 6. I have not been able to find a date yet when this road was first paved, but it would have been in the 20th century. This road is also called Bluff Road because, as with many of these Illinois River towns, they are built in a valley next to significantly higher ground. If you look at the top two pictures of this post, you can see the trees that tower above the town. They are growing on the bluff. I think this road was Morris Road in the 1830s, and it would have been the stagecoach line. William Richey built the first home in Marseilles in 1831 (Story). It became a stagecoach tavern on Morris Road.  It was known as "Buckhorn Tavern" because of the antlers of deer that were mounted on each end of the ridgepole.

Like the road, the river also represents different points in time. A canal, and I assume a lock, was built in the 1920s to bypass the rapids. It was rebuilt in the 1930s as part of the 9-foot navigation project.

Posted by Dennis DeBruler at 3:31 PM