Fortunately I needed to run errands on June 30, 2017, otherwise I would have missed seeing the crane at our local high school. It was high enough that it was easy to spot from Main Street. So when I got home, I grabbed the camera and walked to the high school.

On my way there I grabbed the photo on the left which shows how much the boom+jib towered over the swimming pool annex. I would guess that building is about three stories high. The photo on the right was taken between the two videos below. The first video I took as soon as I came around the corner because a lift was in progress. They were replacing the air-handling units for the auditorium and library. I learned that they did a helicopter lift about a month ago, but I missed that.


Fortunately, they had one more air handler unit to lift in place so I had time to get into a position where I could catch the whole cycle with one video. 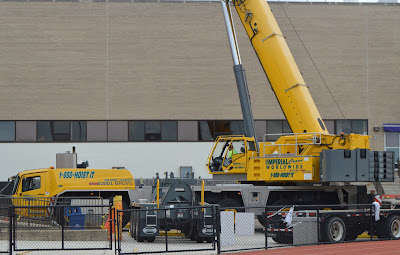 This closeup shot allowed me to determine that it was a Grove GMK6300L owned by Imperial Crane Services. During disassembly, there was a crew of three people, two of which wore yellow Imperial Crane vests. The third one specialized in driving the truck that shuffled the flatbed trailers as they removed the counterweights

This picture also shows the 3-axle boom dolly. And the rear of one of the 6 flatbed trailers that they will use to haul the counterweights. During disassembly, the crane lifted the boom dolly up and over the flatbed trailer to place it behind the crane. After all, if you have a big crane, you can use it to sotre the dolly in an otherwise open space by the crane.

Since they lifted the last unit, I stuck around to watch the disassembly. I tried getting a video of the boom being telescoped in. But it was so slow it was hard to see. I kept this one because you can use the bracket as a reference against a cloud to see some movement. (Who would have thought that some dark clouds would be an asset to photography.)

I decided that a sequence of photos with time stamps rather than a video would be a better way to document the telescoping of the boom.

Then they started lowering the boom and jib. I thought they were going to put the jib on the flatbed trailers. It turns out, they just used the trailers as a working platform so that it was easier to reach the jib to hammer out the pins so that they could fold it.


And this is my last picture of the disassembly because my battery ran out. I knew I was getting low. But I still haven't figured out how to tell when I have just a handful of pictures left before it locks the shutter release.
Maybe it is a blessing I did run out of battery because I would have taken way too many pictures of a rather straight forward disassembly sequence.

What I thought were a couple of rust spots on the side of the boom turned out to be brackets to hold the jib when it was folded. The one on the end of the boom evidently had a hydraulic ram to extend its reach because they fastened the jib to it and used the ram to pull the jib into the bracket at the base of the boom. I found the following picture in their product guide which shows the jib in its folded position.

When they don't have the jib on, they can telescope a lot faster. They extended the seventh segment about 3/4 of the way out without me noticing the activity. They then backed up the trailer with the hook and attached it to the end of the boom.

In this closeup I got a good view of the counterweight assembly hanging from the back of the house.

This shot is the one that I got with the boom almost facing the back of the truck.

While I wasn't looking, they also turned the boom to face to the back and used a couple of hydraulic rams to lower the pile of counterweights onto the metal platform of the truck. I realized that happened when I saw the weights were setting on the truck. The house looked kinda naked without its weights hanging on the back. They then used the crane to place one or two weights onto a flatbed trailer. When a trailer was loaded, the tractor truck driver would quickly move that trailer to the corner of a parking lot at the school and then hook onto an empty trailer and back it into position by the crane. In the meantime, the other two crew members would put weights on one of the trailers left close to the crane.

After they got the weights loaded onto trailers, the boom dolly was moved into position. They then pulled the 7th segment back in. That is when I saw that it can move rather quickly when it doesn't have the jib on it. You could easily see it moving. I'd say about a foot per second.

In the closeup below you can see that a little grey outrigger pad rests on a big square yellow pad. That is the left-rear outrigger. You can barely see the yellow pad for the left-front outrigger behind all of the wheels. They started the engine of the truck and used that control panel in the middle between the big wheels to lift the outrigger, bring the arm half way in so that the grey pad clears the yellow pad, then lowered the outrigger. So they use the outriggers at half extension with the boom at no extension to lift one yellow pad on top of another one so that they had a stack of four yellow pads to load on a flatbed trailer. They then lifted the outriggers, refastened the grey pads so they were held by the outside edge instead of the center, and pulled the arms the rest of the way in.

They then connected the boom to its dolly. First, they swung out a bracket that helped hold hoses and connected the brake hoses between the dolly and truck. They lowered the boom and pulled a hose to release the bakes because they had to shove the dolly a few inches for the brackets to engage the boom. They then turned a valve on the boom ram so that it would float freely up and down. They also switched the house to a mode were it was free to swivel.

The crew member who specialized in truck driving then hooked up to the trailer that we see in the photos because it was parked close to the crane and left. The second helper used a second tractor truck to hook up to the remaining trailer. But before he left, he helped the crane driver maneuver past the school's track, into the parking lot, then turn around in the parking lot. It was a good thing it was summer and there was lots of open space in the parking lot to use for the turn around. I think it was 5:20 when crane and second flatbed truck left.


After my battery recharged, I did go back to take pictures of the counterweights on the four trailers. I have some questions about the axle loading concerning the number of weights and their placement on the trailers. But I'm going to skip them and just do a photo dump. Of note is that the flat counter weights were 9.5t and the tall ones were 9t. 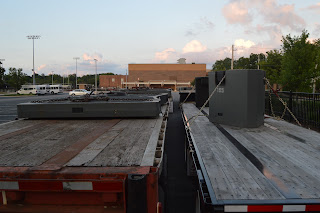 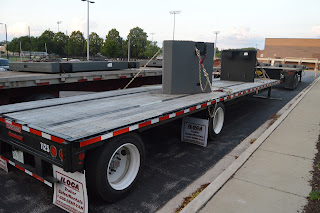 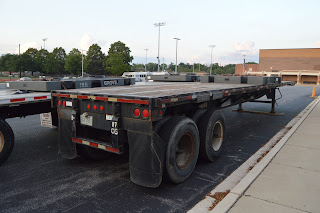 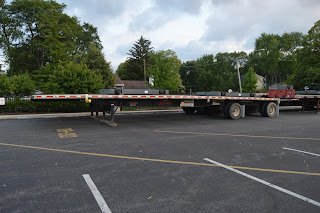 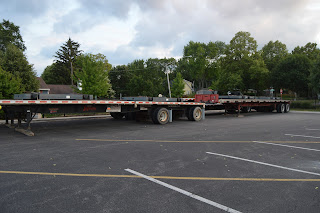 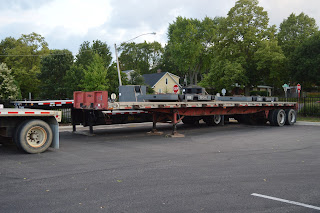 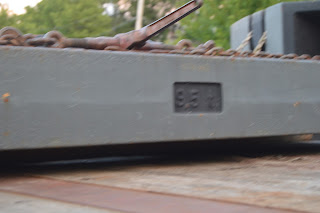 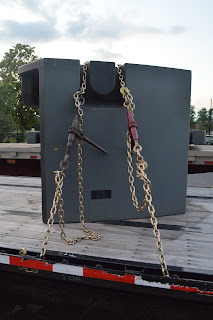 This is becoming my GMK6300L notes.

Posted by Dennis DeBruler at 11:42 PM