I'm publishing these notes without any research so that I can link the three Acme plants together and have placeholders for information. See Coke and Steel plants.
An aerial view that provides an overview of the conveyor to the coke plant that is out-of-frame to the right 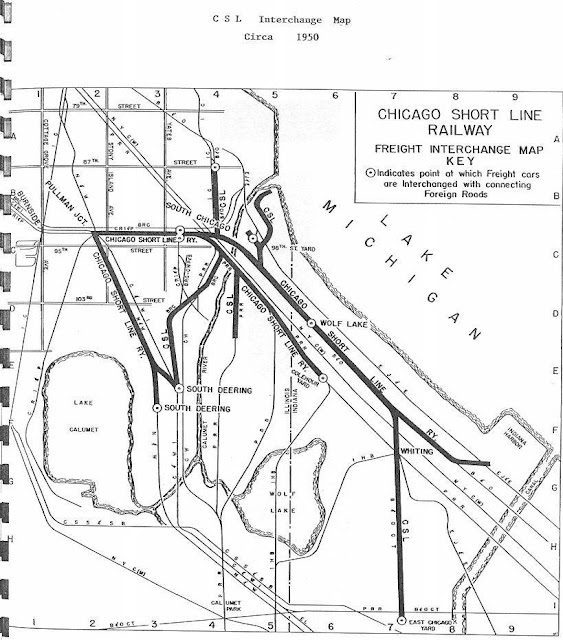 
Acme Steel Co.The Acme Flexible Clasp Co. was founded in Chicago in 1884. In 1899, the company merged with the Quincy Hardware Manufacturing Co. of Quincy, Illinois, a manufacturer of barbed steel staples led by James E. MacMurray. The new company, based in Chicago, changed its name to the Acme Steel Goods Co. in 1907; in 1925, it became Acme Steel Co. By the mid-1930s (during the Great Depression), Acme employed about 1,400 Chicago-area residents. A new plant opened in Riverdale, Illinois, in 1918; by the end of the 1950s, when annual sales of well over $100 million placed Acme among the top 300 industrial corporations in the United States, the move from Chicago to Riverdale was complete. In 1964, Acme merged with the Interlake Iron Corp., a Cleveland-based company that owned plants in Chicago, to form the Interlake Steel Corp. In the mid-1970s, as its annual sales approached $700 million, Interlake had 3,500 workers in the Chicago area. A new Acme spun off from Interlake in 1986. The company had trouble staying afloat and employed only about 1,200 local residents by the end of the 1990s, a number that fell as a phased shutdown was begun in 2001. In 2002, the International Steel Group, organized by WL Ross & Co. LLC, bought the shuttered and bankrupt Acme Steel and re-opened it as ISG Riverdale Inc., a sheet minimill employing about 200 workers. http://www.encyclopedia.chicagohistory.org/pages/2524.htmlhttp://www.idaillinois.org/…/Acme%20Steel%20Comp…/mode/exact

[Some of these photos are of the Riverdale plant such as the one that William Grin identified as the BOF.]