Dave Blaze Rail Photography posted a photo of three F7 cab units with their sheet metal removed because they were being refurbished. (shared) The first generation diesels were wide because everything was, including the walkway, was built inside a truss frame.

Boxcars used to be wood framed and wood sheathed. Then they had a metal frame with wood sheathing. I've seen photos of outside braced cars where they were sheathed only on the inside so you could see the metal truss frame, but now I can't find any photos. (Update: a 1916 photo shows outside braced stock cars.) Fortunately, when I visited the "back yard" of the Hocking Valley Scenic Railroad, I found a caboose that had been stripped down to its frame for refurbishing making the truss frame obvious. (The left truck is a lot older design (friction bearings and leaf springs) than the right truck (roller bearings and coil springs).) 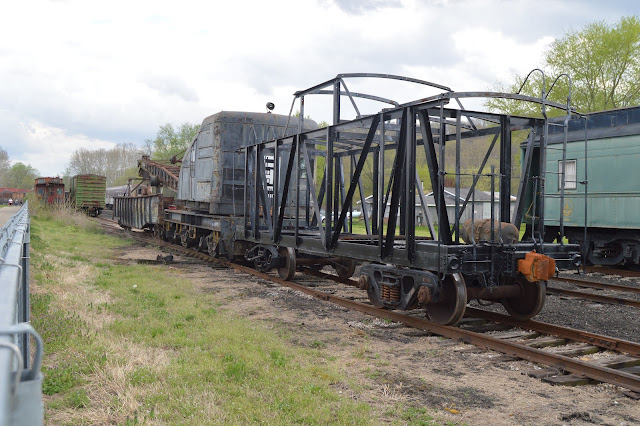 Posted by Dennis DeBruler at 4:41 PM

Email ThisBlogThis!Share to TwitterShare to FacebookShare to Pinterest
Labels: freightCars