Louisville and Portland canal by the Ohio River at Louisville, KY

At the Falls on the Ohio, the river bed falls 26 feet in three miles. I didn't realize until I saw the following photo that there was actually a falls here. I thought it was a rapids. It turns out, it is both. In addition to a falls, it had three rapids called chutes. From north to south there was the Indian, Middle and Kentucky Chutes. The Indian name got changed to Indiana by the 1890s.
The 1831 canal had four flights of locks at its downstream end. But it had competition from the chutes. As with the St. Lawrence River, the canal was used going upbound, but boats would continue to use the rapids when going downbound if the water was high enough.

Cincinnati’s marine designers began to adjust to the canal’s dimensions, building steamboats that were 185 feet long by 43 feet beam, filling the lock chambers to near capacity. To offset the dimensional limits, steamboats loaded with freight to a depth of nine feet used all the water in the canal by crabbing, or pulling through the canal backwards, their paddlewheels dragging them across the mud flats on the bottom. It might take them an entire day to get through the canal in that fashion, but it allowed continuing on to New Orleans or St. Louis without transshipment. [louisville.edu, p82]

The Library of Congress has plans for the 1856 and 1871 enlargements. But they are not digitized.
In the 1870s, a crest dam was built to maintain a depth of 6' in the Louisville docks and at the head of the canal during low water. In the 1900s it built a new dam to maintain a 9' depth to accommodate tows carrying coal. This dam used the recently developed Portland cement instead of stone masonry for the foundation. Concrete was also used in the fixed weirs. Some of the dam was Boule trestles. The segment at the head of the Indian Chute used Chanoine wickets "that could be raised or lowered faster than the Boule sections." [USACE, p210] Frequently, during the dry season, work was done to widen (by blowing away rock) and channelize (by building dikes) the Indian Chute until it achieved a width of 400'. [USACE, p214]
Reducing the flow in the spillway of the Boule Dam in 1930. They hinge a frame up and then insert a panel ("metal shutter"). [booklet, p7] Boule was the type of wicket dam design. Part of the crest dam above  the Middle Chute was replaced in 1879 as an experiment. It was considered a success. [USACE, p171] The Boule dam shown here was in the 1920s dam at the head of the Indian Chute. 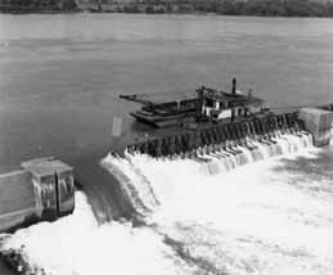 In 1910, Congress passed a bill that approved a 53 lock & movable dam plan to canalize the river with a minimum depth of 9'. In that plan, the new dam built here would be #41. The plan called for an 85'x600' lock even though all of the other locks would be 600'x110'. The width of the lock was changed to 110' and the width of the canal was changed from 170' to 200' so that standard tows could pass each other without one of them having to duck into a passing basin. [USACE, p214] William McAlpine was in charge of the design and construction of the 600'x110' lock,
Because WWI caused the price of coal to go up and because the ice storm of 1918 heavily damaged the existing crest dam, William McAlpine advocated building a new dam that was 8' higher than the damaged dam. This extra pool height would eliminate the need for dam #40 and would provide more head for hydroelectric power. [USACE, p227] A public-private partnership was formed similar to the one that was pioneered by the 1913 Hales Bar Dam. The L-shaped dam that we see today was adopted to deliver the full 37' head to the powerplant built between Rock Island and Shippingport.
The lock walls did have to be raised and the lock gates had to be replaced with longer gates. [USACE, p231]
As part of the 1960s initiated effort to replace most of the wicket dams on the Ohio River with gated concrete dams, a 1200'x110' lock was added in 1961 and the canal was widened from 200' to 500'. The name of the complex was changed from Lock and Dam 41 to McAlpine Locks and Dam. The wicket controlled short part of the L dam was replaced with Tainter gates. That meant that tows could no longer use the Indian Chute. All river navigation had to pass through the canal and locks.
For information about the second 1200'x110' lock that was finished in 2009, see McAlpine Locks. For more information about the dam and the fossil coral reef it protects, see McAlpine Dam. I still need to write some notes about the powerhouse.
Posted by Dennis DeBruler at 9:50 PM