Ingot trains were another type of "hot car" train. The invention of continuous casting has made ingots obsolete.
Bottle cars were used in integrated mills to carry the molten iron from the blast furnaces to the steel making furnaces.
This thread has interesting info on bottle cars concerning size, insulation and rerailing.
The hot iron car on display in the  Sloss Furnaces in Birmingham, AL is so old that the bottle shaped design had not yet been developed. Even then they were using three axle trucks. 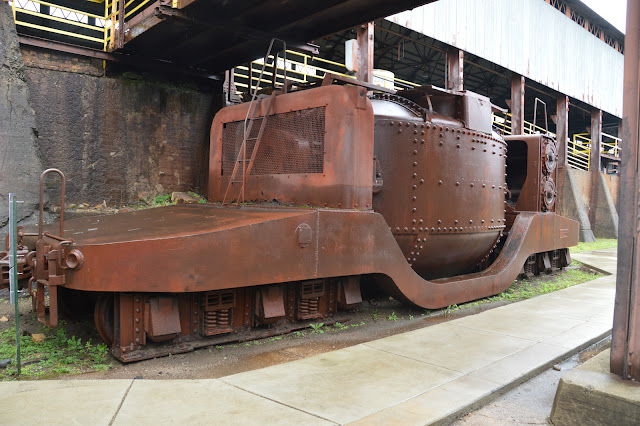 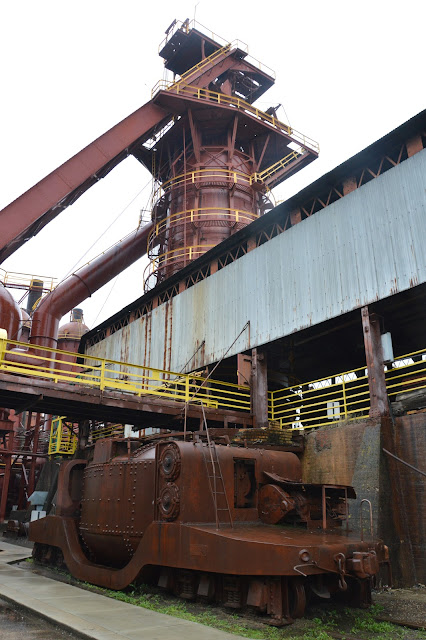 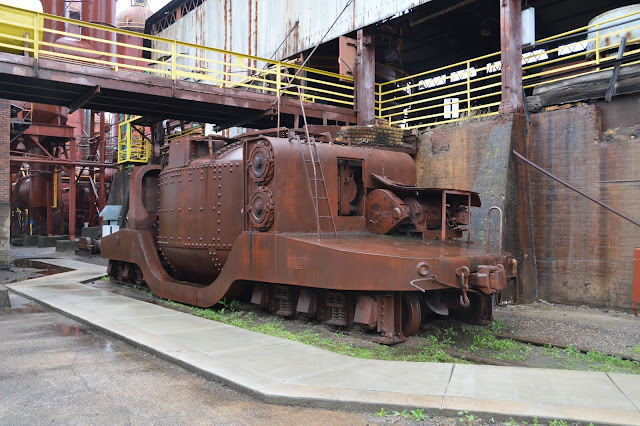 The transition has happened to the bottle shape, but it has "only" six axles.
This is the post that motivated me to quit just collecting photos and to go ahead and publish. As blast furnaces grew, so did bottle cars. When I see a photo of a bottle car, I always count the number of axles. 16 axles is the largest I have seen. 350 tons was the biggest made, and they were used at Bethlehem Sparrows Point. [TrainOrders]
Rick Rowlands posted three photos with the comment: "First of the new 350 ton bottle cars coming out of the PECOR plant in New Castle.  Date unknown."
Scott Johnson: I work at the old Inland Steel and we have 4 of these ladles. Had a loaded one go on the ground pretty bad last fall. They had to call out two different crane companies (Hulcher and Crane Masters) to tag team it. Had broken rail and everything. Took them about 10 hours start to finish. Would hate to be the one paying that bill.
Donald Hall: How many of you have spent hours with an Oxygen Lance trying to burn open a bottle that had frozen over ?
Jeff Millikin: I’ve spent many shifts doing that at US Steel Granite City Illinois.
Donald Hall: Standing over it, and Eating all the damn red smoke !
Shawn Shaffer: It's is now Ben Weissman Scrap yard but the rail car sidings are still there. The building this is coming out of was where the can recycling is now. If you go in the office they a copy of the prints for the old furnace hanging on the wall. I don't think pa engineering was part of Mesta. All of Mesta works in New Castle is now owned by EGI.
Eugene Hake: Torn down about 8 years ago they put a shredded scrap yard in now I work there 17 years before they tore it down it’s was right beside EQS

Bill Parkinson posted two photos with the comment: "A couple of shots of Treadwells at work. No.5 blast furnace AIS Port Kembla."

Bill Parkinson posted two photos with the comment: "When loaded metal ladles derail they don't just derail, they tend to imitate gophers & dig themselves into the ground. This gives the rerailing crew a bit more stress as there is a time limit on their task due to the vehicle being full of molten iron. Here are a couple of shots of a Pollock ladle in distress. AIS works Port Kembla."
Christopher Beverly: I've seen empties bury themselves half way up the trucks before! Heavy dudes!
Kevin Hollo: I worked for hulcher out of toledo ohio for 10 year. Picked more than a few bottles up. The smaller torpedoes were not bad, but the big ones sucked! I will have to look thru my pics. Im sure I have a cpl
Bill Price: At Fairless Works, our torpedo cars had 4 trucks. If 1 was loaded and derailed, it was quite a job rerailing it. The car shop would come and use jacks to raise the trucks. Using just oak blocking was futile, it would just get crushed. The 4x4, 2x10, and wedges would get the sap squeezed out of them.
Chris Merry: If they take too long to get them back on the. Us bricklayers get more work!
Kevin Hollo posted four photos with the comment: "These are a few pics of my trainwrecking days. I think this may be Mittal Burns Harbor, maybe. But anyway the bottle had a wash out. We picked the bottle off the trucks and walked it down to two new sets. We tried to pick the set of trucks, but my 583 with extra slabs on her wanted nothing to do with it. They were in a solid block of iron!"
Kevin Hollo We had 4 part blocks, short poles and extra slabs when we had to pick them bottles. I kinda miss trainwrecking. But now I'm a sparky in a mini mill and love it. [Bottle cars are particularly heavy so they had to specially rig their sidewinders to lift them.]
Jon Ruehle What exactly IS a "washout"?
Kevin Hollo Jon Ruehle the refractory cracks or "washes out" allowing molten steel/iron to get behind it. Then melts through the shell of the vessel. In one of the pics you can see where the iron melted through.

Edward's comment: "Passed by accidentally while walking along the CSX's Pittsburgh main."

Note how short the cars were before they figured out how to use more than two trucks to spread the weight on the rails.

(new window) A bottle train is at the beginning, then its just boats, trains, and bridges. This is the first bottle train I have seen that doesn't have a gondola between each bottle car. If it is staying in the mill and not going over bridges, then a spacer is not needed to spread out the weight. But I have read that the gondola cars provide the braking power for the train because the hot bottle cars would fry brake linings.


Interlake/Acme Steel had 19 hot metal ladle cars; they all had a 200 ton net weight. 14 were built by Treadwell and 5 by Pollock. They were all roller bearing equipped inside journal boxes, this to protect the bearings from any molten metal splashes. When loaded to the 770,000 lb. allowable gross weight capacity they were the heaviest cars running on any main lines in the Chicago and south suburb areas.

The first two photos posted by Scott Marlow.
Kevin Tomasic
Nice series. That’s a small bottle car.
(new window)    Weirton WV, 1989     The bottle trains are in the background. Here is one of the views.  Here,  here and here are some slag cars in the background. After chugging up a hill, they show the slag cars being dumped.  A five bottle train  The engine is smoking almost as much as a bottle car.
Note that they do not use idler cars inside the plant.
(source)
Bubba Dubs

That bottle car loco is flying!


18 photos of a derailed bottle car spilling iron on a park.
Posted by Dennis DeBruler at 10:51 PM