McAlpine Locks on the Ohio River at Louisville, KY

In 1825 the Louisville and Portland Canal Co. obtained a charter from the Commonwealth of Kentucky to build a bypass canal, which opened Dec 22, 1830. "As originally constructed, the canal was 1.9 miles long, 64 feet wide, and had at its lower end a 3-flight lock with a total lift of 26 feet. Each chamber was 198 feet long between miter posts, with available length of 185 feet, a width of 50 feet, and a lift of 8.7 feet. The canal had a depth of 3 feet at low water stage. At the time the canal was completed, its dimensions were thought to be sufficient for all time, but by 1852 only 57 percent of the craft in use on the western waters could pass through the locks. In June 1874, the War Department, Corps of Engineers, assumed the supervision of navigation. In 1880, navigation was made free of any traffic charge. Various improvements and alterations were made until they culminated in a combined navigation and hydroelectric development. This development was completed in the 1920s, and formed an integral part of the canalization of the Ohio River....In the 1960s, the canal was widened to 500 feet, the 1200 foot lock was built, and the present dam was constructed." [USACE-history] "The locks have the highest lift (37 feet) of any of the locks on the Ohio." The first Louisville & Portland Canal with a three-lift lock system was built in 1830. The canal and locks were enlarged in the 1860s and 1870s. The 360x80 locks completed in 1872 were the largest in the world. In the 1920s a 600x110 lock with a 200' canal was built as part of the 51 locks and dams project. This became lock #41. In 1961, the 1200x110 lock was completed and the new dam was done in 1964. This era also saw the canal widened to 500'. To meet future needs, replacing the 600x110 lock with a second 1200' lock was finished in 2009. [booklet, p2,3]
A more detailed history of the locks and canal
In the Summer, when the river flow is low, the difference between high and low pools can be significant.

During the wet seasons (Spring and Fall), the lower pool is closer to the height of the upper pool. I've learned that Spring on the Ohio River evidently starts in February in terms of river levels.

During a flood, the pools are practically at the same level. The water in the middle between the yellow striped wall and the next wall over is in the lower pool.

I'm going to have to make a field trip and note if the fat white line is at the top of the lock walls. And look around to see what was under water when it was at the top line.

This joint venture project for the Corps of Engineers involved replacement of existing 300-foot and 600-foot locks with a new 1,200-foot lock on the Ohio River as well as replacement of existing swing and bascule bridges with a high clearance fixed span highway bridge. Construction also included installation of the culvert valves, upstream and downstream miter gates, installation of updated PLC controls for the lock operating systems, demolition of the existing cofferdam, and construction of the Upstream and Downstream Approach Walls. With over 450,000 cubic yards of concrete and 12 million tons of reinforcing steel, the McAlpine Lock helps relieve a major bottleneck on the Ohio River.

Below are Global Earth snapshots of the construction.

I was shocked to see in a satellite image that a second 1200' long lock had been built here. I became even more shocked when I learned this construction was done while the Olmsted Dam was draining the funding resources for new lock and dam construction.


The Water Resources Development Act of 1990 authorized the McAlpine Locks Replacement Project. This work replaced the 600’ and 360’ locks with a 1200’ x 110’ lock on the Kentucky bank side of the Louisville and Portland Canal adjacent to the existing lock. This gave the McAlpine project twin 1200 foot locks for efficient movement of projected increases in tow traffic. In addition, the existing swing and bascule bridges were replaced by construction of a two-lane, high fixed span concrete bridge to provide access to Shippingport Island and the Louisville Gas and Electric hydroelectric generating station. The new lock was completed and opened April 2009. [USACE-history]

Work was stopped on the expansion of the Chickamauga Dam in Chattanooga because the Olmsted Dam was sucking all of the construction funding. (Work has resumed because Congress agreed to use general funds to help build locks.) And it would seem that the Kentucky Dam getting its first 1200' lock should have been higher priority than a second 1200' dam at this location. The post below reminds me that the Soo Locks need another lock that is big enough to handle the 1000' footers.

Digging deeper, the NY Times graphic below reinforces my shock. Using a satellite image, I verified that the Olmsted Dam is being built with two 1200' locks. That makes sense since it will handle the highest tonnage in the US. I should point out that #52 and #53 were effectively above capacity because, as the NY Times article explains, queuing delays to lock through were in terms of days, not hours. But the increased capacity of McAlpine can't be effectively used until the capacity of the other lower Ohio River dams is increased. Was the McAlpine funding based on the power of a Congressman winning pork barrel money rather than need? I am confused why the tonnage through the John T. Myers Locks is significantly lower than the downstream (Smithland) and upstream (Newburgh) locks. Is that because the Mt. Vernon port (coal and EVWR traffic) handles a lot of upstream traffic? 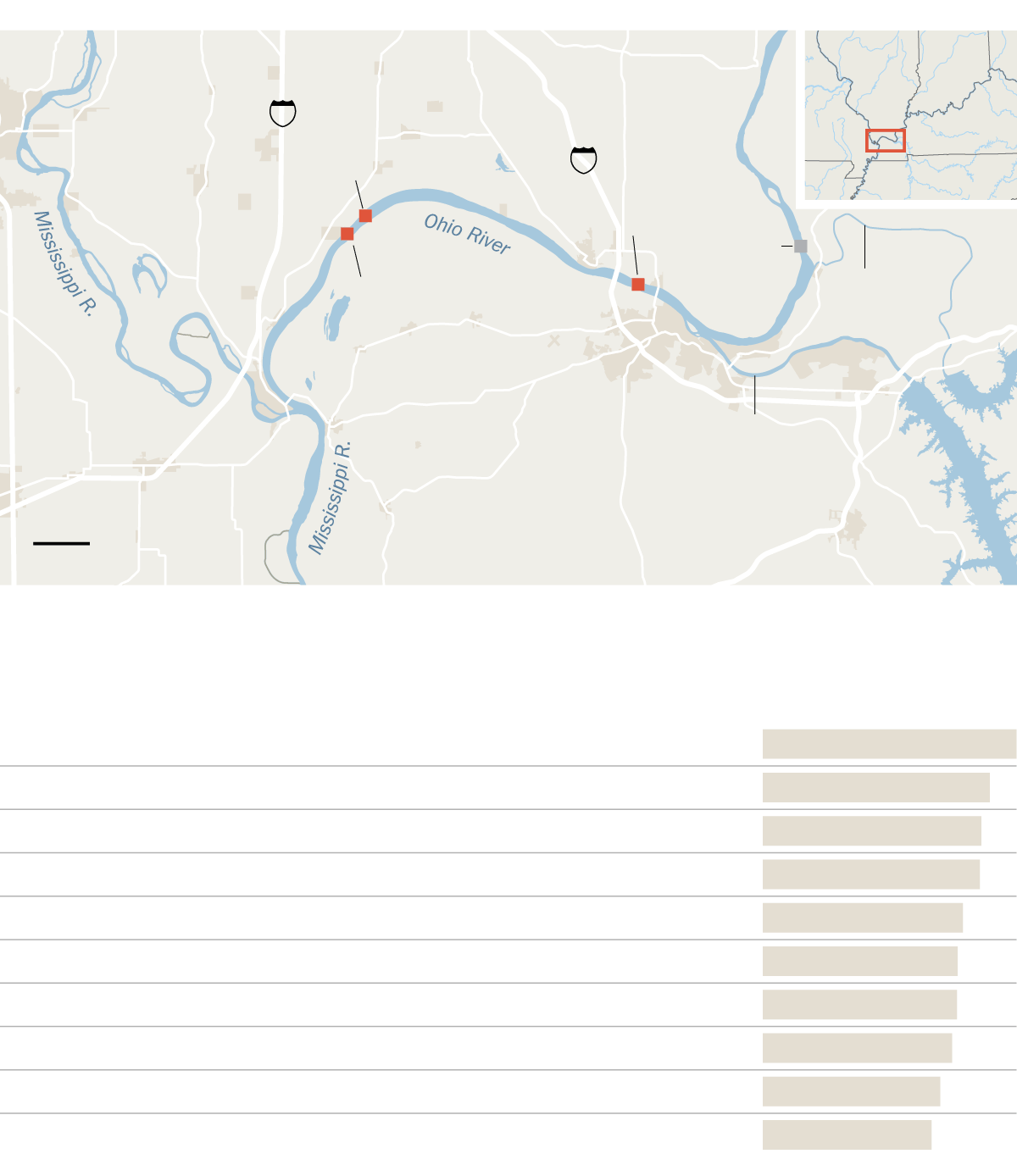 According to the Army Corps of Engineers, in 2006 the total commercial freight carried on the Ohio River was 270 million tons, with a net worth of almost $31 billion.  55% of this freight was coal.  Other important commodities included aggregates, petroleum products, grain, iron/steel and chemicals.  The Corps predicts freight traffic of 312 million tons by the year 2010 and 370 million tons by 2030. [huffwd]

It would be interesting what the reality of the 2010 number turned out to be.

I found some interesting info concerning some locks, but it doesn't include McAlpine. Given that it includes #52, #53, Chickamauga, and Kentucky, maybe this report is about just "problem" locks.

I'm not the only one who thinks the USACE funding priorities seem stupid. This report says the Corps is proposing to add a second 1200' lock to the J. T. Myers Locks. But we have already seen that it is the least used lower Ohio River lock. The report also points out that the Corps has been ignoring that the coal traffic is going away. It continues to overestimate lock usage. I was not able to find the type of usage information that NY Times found by looking at USACE web site.

The Tennessee-Tombigbee Waterway is another example of the USACE overestimating usage and underestimating cost to get approval of a project. In this case $2 billion was spent on a project that continues to carry significantly less cargo than was predicted.


Having slept on it, I remembered that these locks have the highest lift on the Ohio River, 37'. In fact, "Lock 41’s lower lockgate had to be forty-eight feet high, double the height required at the other locks" [USACE, p215] That means it takes longer to fill and empty these locks compared to the other locks on the river. Thus they can handle fewer tows per hour. So maybe they needed the second lock to keep up with the traffic that the other locks can handle. Also, I think the second 1200' lock was built by making an 1920s 600' lock longer. So the gates, etc. were already built.

Posted by Dennis DeBruler at 11:57 PM