(see below for satellite information; Dec 2019: this is a total rewrite of what was published Dec 2015)

I've seen two names for this yard: Commercial and South Chicago. And the engine servicing facilities on the west side of the yard have their own name: Jeffery. More on Jeffery below.

The west half of the yard is now vacant land. Once again, we see vacant land in Chicago that is going to be hard to reuse because it is elevated. The tracks on the south side in the 1938 aerial was Rock Island's South Chicago Yard. Chicago Rail Link (CRL) has removed that yard.

Arturo Gross caught a train going down that connector towards Commercial Yard.
I could not find Commercial Yard in my goto reference for Chicago --- B&OCT's industry service map. Fortunately, Google found a Train Orders posting that had CSX_ENG's comment: "Commercial Ave Yard is alongside 95th between Stoney Island and Commercial Ave." Given that info, I was able to determine it was labeled "S. Chicago Yd. (BRC)" on the B&OCT map:

According to some Facebook comments I read, the railroad that currently interchange with BRC here are CRL and South Chicago and Indiana Harbor (the old CSL).


The foundation for the yard office still exists because it also functions as part of the embankment wall.


Mark Malnekoff posted three photos with the comment: "Spring of 1983 the only time i ever saw the BRC's South Chicago enginehouse. Chicago, IL. circa March 1983"
Dennis DeBruler The enginehouse would have been setting in those weeds. We can see the elevated yard in the background.
https://www.google.com/.../data=!3m6!1e1!3m4!1sGFf... 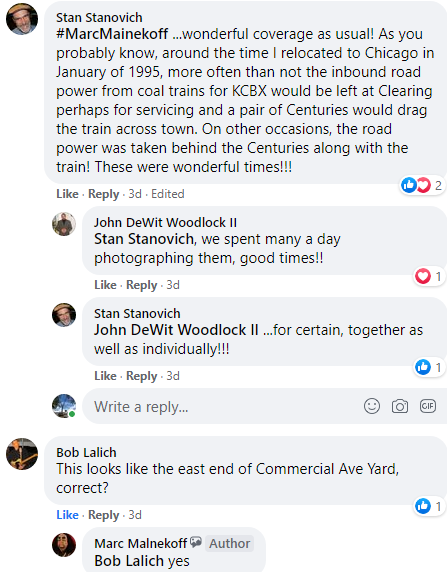 TrainOrders has some more photos. I can only access the thumbnails, but that is no problem because I'm more interested in the comments than the photos. The comments indicate the enginehouse was close to Paxton Avenue and 94th Street. That made sense because Jeffery Avenue is the next underpass to the West. However, the land was elevated here and full of tracks in the 1938 aerial photo. Bob Lalich's comment indicated 94th and East Avenue. But Google Maps identified East End Ave as a short diagonal road up by the Pennsy+NYC 8-track corridor. I tried looking for an East End south of that little diagonal road. I didn't find it until after I found East End down by 94th. Once I found East End + 94th, it was easy to spot the enginehouse on the 1938 aerial. And it appears as though the concrete floor still exists on Google Maps. Once again, the land scars of an engine service facility is "preserved" because it is probably contaminated.
It looks like that enginehouse was built to serve diesel engines. This makes sense because BRC used switchers and switchers were the first locomotives that were switched from steam to diesel. This enginehouse avoided having to run locomotives all the way back to Clearing Yard for servicing. The distance would not have been as big an issue as the congestion of some of the junctions it would have to go through.

Historic Aerials indicated the building existed in 1988, but it was gone by 1998.