Update: video of a crane recovery. It took two cranes, a big tow truck, and a bucket truck to set the crane upright again. Most crane lifts make it look easy. Starting at -2:19, this video reminds one that things can go bad. And it does show that the joints in the boom are a weak link. (Earlier in the video, it demonstrates why you want a roll bar or strong cab on a tractor.)


This is the picture that motivated me to write this posting. (The red beams are part of an art sculpture.) They brought in at least two other cranes to help untangle the mess. 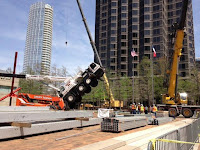 Telescoping booms have become a common design for cranes mounted on a truck because the boom can quickly and easily be extended to work and then retracted to move on. It appears this truck has five segments.

I'm finding it rare to find pictures of tall booms. One reason the crashed crane photo was so neat is because the boom was horizontal and it easily fit into a photo :-) Another reason is that it demonstrates that these booms will bend before they break.
I'm assuming that Mac Mackay took these photos for publicity purposes and that their use is desired.

I believe this boom has seven segments. When asked for the details of the shipment, John added:


This particular unit, which arrived by ship last week, belongs to Gruas Kirten of Soria, Spain, and is apparently a rental for use somewhere in western Canada. and appears to be a AC 250.1 model (250 ton, 300 US ton) capacity, with the 80 meter boom and 12x8x10 drive train.


Liebherr by railCN delivered this large Liebherr to Halifax from AllCanada Crane in Mississauga.

Notice the trailer under the boom to help spread the load across more tires to reduce the impact on highways.

Telescoping booms are also built to be mounted on ships so that they can unload themselves. Note that three hydraulic rams are used to raise this boom. Normally you see just one or two. If you follow the picture's link and scroll down, you will see load charts. As expected, it can raise a heavier load with the boom extended and upright. As the boom becomes more horizontal, the reach from the ship goes up, but the twisting moment on the crane reduces the weight it can hold.

Cranemasters used three Mantis cranes to help install new crossovers in the BNSF/CB&Q Racetrack. They did not use the telescoping feature to extend the boom during crane setup. They continually extended and retracted the boom while moving to control the reach of the crane.

They have been replacing the signalling bridges along the BNSF tracks in the Chicago area to implement Positive Train Control. I zoomed in on the crane part of a couple of Jim's pictures. Jim explained "The new signal bridge at West Eola went up today...here are some photos I took while the crew was raising the horizontal portion:"

If I ever buy a pickup truck, I can use one of these to get the camera up in the air to take pictures of railroad yards. (I'm too chicken to learn how to use a drone.)

Update: a video of a crane unloading a 4-4-0 locomotive.


An 8-axle mobile crane is the biggest we have seen so far, but they are using the rear winch on several dozers instead to raise the locomotive. Is the crane going to be used when the rear of the locomotive is at the top of the cliff to raise the cab end over the concrete retaining wall?

John W. Coke shared the three pictures from Amad Akhras's post. His comment: "When the load will not pass under the bridge, lift load over the bridge and continue."

This is the first 9-axle crane I have seen. But even nine is not enough. The comments imply that because the soil is wet in the Spring, the axle loading weight is reduced. (Mud is a more extreme example of wet soil not being able to hold as much weight as dry soil.) So they add more axles to reduce the weight carried by an axle.
A video of cranes and transporters turning a boat right-side up.


Milwaukee 261 steaming east out of Clyde Yard (Cicero, IL.) passing under the old Ogden Ave. overpass as it's being removed.

One advantage of railfan pictures is that sometimes they catch something besides a locomotive. I'm glad Ron mentioned the Ogden Ave. overpass removal.

I wondered why one of the four cranes was a truss crane. Then it occurred to me that the truss crane is probably the crane that has been on the job for months removing the smaller members. Then they brought in three mobile cranes to help remove the two side trusses. Evidently the "partner" of the truss crane is going to extend its boom in order to lay the eastern bridge truss down on the left side of the tracks. Or maybe they will just hold that truss in place until the western truss is down and one of those bigger cranes can get the south side of the eastern truss and move it to the side of the track. Actually, I'm trying to figure out why they needed to lift both bridge trusses at the same time. If they lifted one truss at a time, then only one mobile crane would have been needed.

I am surprised they are running trains under a load suspended by cranes. I'm sure the BNSF safety office would stop the trains now while something was hanging over the tracks.

I wonder what the top speed of these cranes is. These two photos that John W. Coke posted indicate they are not real mobile if an even bigger rig is needed to transport them longer distances.


Ahmad Akhras posted a couple of shots of another biggy:


A video of assembling the world's most powerful mobile crane --- LTM 11200 9.1. It needs editing, I did a lot of skipping. But You Tube offers some more interesting videos such as this time-lapse of a LTM 1750 9.1 being assembled at a construction site. A better video of the 11200, but the boom is still not complete.

It is nice to see what a crane looks like in both operational and mobile configurations. Stuart Lindsay posted two pictures with the comment: "Grove 250."


Louie Dee posted three pictures with the comment: "She's all out."

I wish Louie indicated the make and model. The first thing I noticed in the first picture was the bend in the boom. So did a comment:
Clay Vice Look at the bow or bend in the boom, got to be good American Steel.

And they keep getting bigger. The boom dolly helps spread the weight of the boom onto more axles to keep it street legal.

Rick Kleuskens posted nine photos of a Grove GMK 7550. Some are using a boom wagon, and some are not.


There are several photos and a couple of videos in the comments on this post. This is the largest crane made by Grove and is rated at 550 US tons.
Tadano is testing a new "triple boom" design. (source)   (I need to get some pictures of a boom suspension system to illustrate what this design is supposed to simplify.)


I believe the "wings" below are the "boom suspension system."\

Working at Chrysler Group LLC Sterling Heights Assembly Plant we found ourselves in a tight spot, but our guys and our Grove 6400 handled it well, as always. For those who need the numbers: 235' radius, 66' main boom & 227' luffing jib.


Across the tollway from where I parked to watch the MLC300 work was a Grove owned by L J Keefe. It and two excavators were laying pipe. At one time when I looked over to see what it was doing, it had a section of pipe hanging from the hook. But in these photos I see two cables coming from a bracket at the end of the yellow segment. What would be the purpose of those cables? I might make another trip and swing over to County Line Road, https://www.google.com/…/@41.9264868,-87.9206…/data=!3m1!1e3

Cody Lane Hannah Could be attached to an clam bucket. Those two cable coming off the yellow section is what would control the opening and closing of the bucket.
Kevin Mitchell I d say as above... hydraulic grab/clamshell... so only one hoist rope required instead of normal two ropes.. one normally a holding rope for open/empty grab.. 2 nd rope closes and lifts full grab.. hydraulic system does away with one line of hoist rope n uses cranes hydraulic system to open n close grab.. in pic looks like they affixed main hook to aux line to stop main block swinging about and wrapping around auxiliary line.. hope this sounds clear to ya
Dennis DeBruler Thanks. Hydraulic hoses to an attachment makes a lot of sense. Obviously, a "juice crane" has a lot of hydraulic power. And modern hydraulic circuits need two hoses. I suspect the attachment is some sort of "tongs" instead of a clam bucket. Tongs would simplify picking up and releasing pipe segments. The site has two excavators to dig and cover the trench. Since this is by Addison Creek, I this construction is some sort of storm water project. And thanks for explaining why the main block looked like it was attached to the hoist line. I was wondering about that also.

A video of a solution to getting smaller loads higher. The boom can be longer than a crane because it stays almost vertical when it has a load and because it looks like it is resting against the building when it is carrying a load.

A video of a Liebherr sales demonstration including how the wheels on all the axles of the big units (up to 9 axles) turn so that they can make relatively sharp turns and crab.

Manitowoc bought the GMK Grove series from Krupp. Only Link-Belt (or was it Terex?) makes their owned formed booms. The other crane companies buy them from a company in Germany.

Posted by Dennis DeBruler at 4:39 PM