One weekend, BNSF/CB&Q replaced crossovers west of Maple Avenue in Downers Grove, IL. I'll describe the prefabrication of the crossover in another post. This posting focuses on using cranes to move the crossovers into place

The first crossover was long enough that I needed two pictures to get the whole thing. Note that there are two cranes and an excavator to lift the west end and only one crane to lift the east end. It struck me that they did not do a very good job of choosing their pick points. Sure enough, when they tried to lift it, they could not safely get the east end off the ground. I knew stands of rail bend pretty easily because you see the bends when they lay rail on the side of track for replacement operations. It turns out that two rails tied together also have a significant bend. 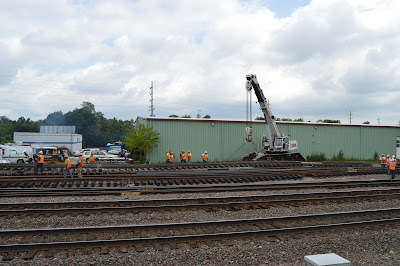 After trying to do the lift for a couple of minutes, they finally brought in a front loader to help lift the east end. 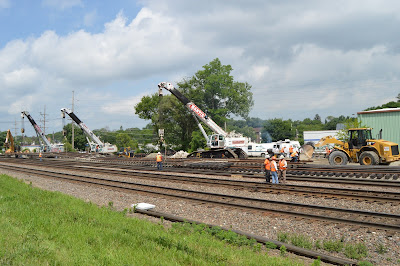 They moved the crossover west and on top of the existing track until the front loader could not reach any further sideways. They then reconnected the loader to come in sideways.

Then they finished placing the crossover the track. Note that they generally increase the reach by extending the boom rather than lowering the boom.

They then joined the others for lunch, and I headed home.

When I checked back a little after 2pm, the cranes were parked in the staging area and they were doing some work with the "yellow equipment" (lower-right). Note in the background of the picture a Hy-Rail truck is pulling some ballast hoppers. I caught a better shot of the ballast "train" a little later. (One reason for using a truck instead of an engine is that a MoW person can drive a truck. If an engine was used, an engineer and conductor would be needed. I've read stories where the MoW crew would be ready to do a job, but they could not leave because the engine crew had yet to report. Plus the engine crew would spend most of their day do nothing.) 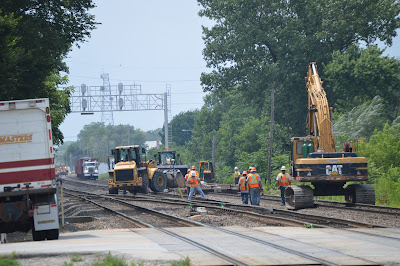 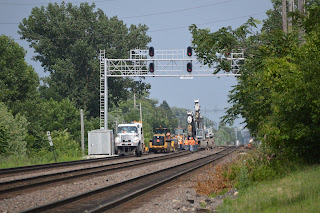 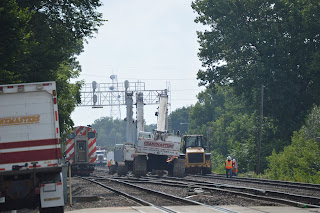 They ran trains most of the weekend on M3 (the south or left-hand track in these pictures). You can still see the commuter in the background as they resumed working. 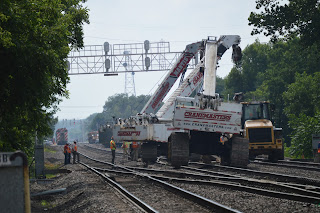 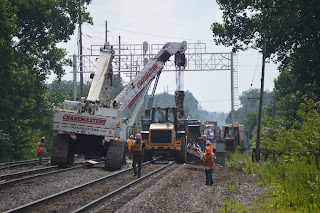 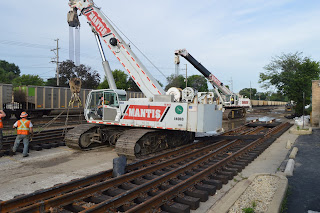 When I came back again after 7am the next morning (Sunday), the cranes were down by Fairview in the staging area picking up another prefabricated track piece. But is was shorter and only two cranes were being used. I took this picture from the north side in the parking lot of a piano store. The tan area by the tracks in this satellite image used to have industrial sidings. This is the area that BNSF used to prefabricate their crossovers. I took quite a view pictures of the move along the tracks because electrons are cheap and I was bored. I'll spare you of most of them.

They lowered the track to the ground when an Amtrak came through. Notice that the trains are now running on M1 (northern most track). 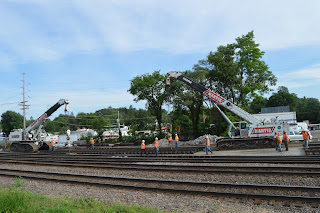 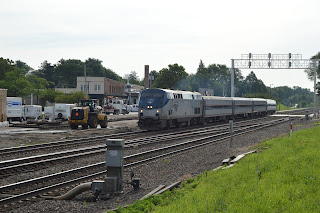 I brought along a magazine to read because it took them almost another hour to get close to Maple. They rotated the cranes as they moved so that they were lifting from the side instead of the ends. The trains are back on M3, and they did not lay down the crossover while this train came through. 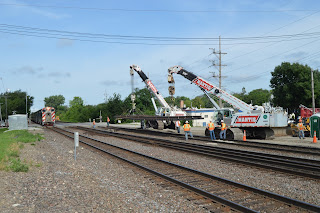 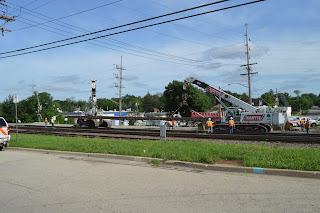 They had to closely watch the rear of the front crane as it went by the crossing signal. They had the track high to get it over the little signalling box on the right. It took them a while for the rear crane to extend his reach to get his end on the track. Then they uncoupled and headed back to park next to the green building.

They repeated the process with another segment. But this time the boom ran into the tree, and it took them a long time to figure out that all they had to do was to rotate the crane to clear it. This time both cranes came out on Maple to set the segment down on the track. 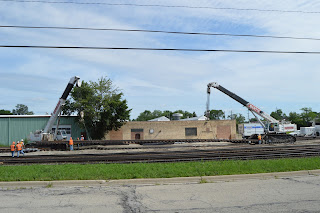 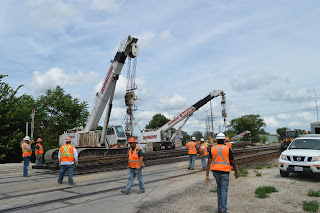 They then hooked front-loaders to both ends and drug the segment down the track into place. 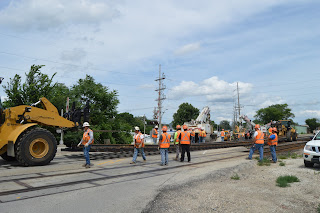 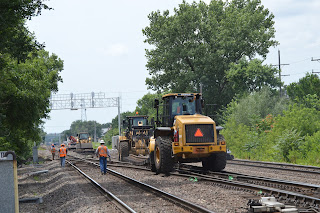 If you click the satellite image at the top of this post and pan east, you will see there is a another set of crossovers. This signal bridge just west of Fairview Avenue has two heads per track so that it can show the status of the straight and diverging routes. It was built just behind the old bridge. It is high so that you can see its signals during the interval when both bridges were still standing. When they install the new signals, the heads are facing sideways. Then during the weekend of the cutover to the new signals, they turn the new ones to face the track and turn the old one sideways.

In this view looking South from Joliet Union Depot we see the old signals have been retired, but not yet removed. There are new signals in the background above the end of the Amtrak train. The northbound Amtrack train is on UP/SP/Chicago, Missouri & Western/ICG/Gulf, Mobile & Ohio/Chicago & Alton tracks and the (timecard) westbound intermodal is on BNSF/Santa Fe tracks.

Update: When I accessed Cranemasters web site, I saw a popup advertisements that shows they have developed an extender so that they can more efficiently deal with the flexibility of the track and exploit the lifting power of their cranes.

The following photo demonstrates why I thought, the cranes used for the BNSF job were overkill. Excavators can do the job.

Posted by Dennis DeBruler at 1:55 PM