We have seen marine diesels, now I found a picture of a modern GE locomotive diesel.

At the far end of Barn 9 at the Illinois Railway Museum,  they have a diesel engine on display. It was rather dark inside the building, but cranking up the ISO on the camera seems to have done the trick. 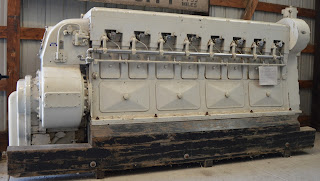 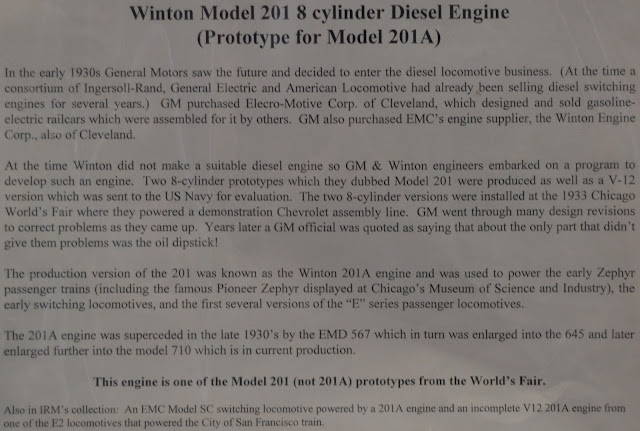 Update: Even though Alco lost the locomotive business, their diesel engines were good enough to find other applications such as tugboats and, in this case, one of engines in the NASA space crawler.

Mike's comment:
All you railroad guys, can you identify this engine? I've worked here on the Coast Guard base now for over 2 years. Have walked past this thing hundreds of times. Only today did I actually stop and read the plaque.

Elliott Moxley The Polar class icebreakers have 251s as well.
Taking out the old engine to make room for the engine at the top of this posting.

Lifting the engine pictured at the top of this posting into its locomotive. The oil pan holds 390 gallons of oil.

Marc Glucksman shared a photo of a GE 7FDL 16 V16 prime mover on blocks and in the orange "bracket" ready to be lifted into a P42 that needs an engine replacement at the Amtrak Chicago maintenance facility.

Posted by Dennis DeBruler at 11:21 PM