(Historic Bridges, Bridge Hunter Old, Bridge Hunter Current, Satellite) While my daughter drove me around Chicago, I took pictures of bridges. While trying to take a picture of Milwaukee's Z-2 bridge, I caught an interesting angle of the cable suports for the North Avenue Bridge. Once again, Bing's Bird's Eye View proves to be a useful "time machine" because it shows the trunion-bascule bridge that this cable bridge replaced. In fact, it appears they are building a temporary bridge to bypass the regular bridge during its replacement.

The new bridge is a hybird of cable-stay and suspension. Specifically, the 84-foot approach spans and the ends of the center span are cable stayed, but the center of the center span is suspended with hangers from a suspension cable. The suspension cable itself uses an old design of multiple tie-bars rather than the more modern design of a spun cable since the span is relatively short.
The subject of this shot was the industries in the background. But it also catches the transition from cable stays to suspension hangers. The subject of the photo below is the railroad bridge, but you can see on the left how the suspension cable is fabricated with three tie-bars. 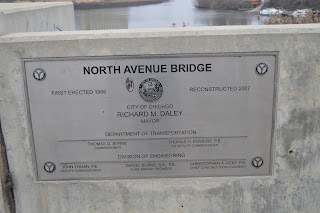 Notice this plaque says the bridge was "reconstructed" in 2007. I think the verb "replaced" would have been more appropriate.
Update: As I approached this bridge from the west, I wondered what used to be on the land that Home Depot now occupies. (Note the traffic. When my daughter drove me down to Goose Island so that I could take photos of the Cherry Avenue Bridge, we could see gridlock for many blocks ahead of us. We watched the lights turn green several times and no cars moved except of an Uber driver that illegally used a right-turn only lane. So we got off North and used some side streets. For this trip, I went up I-90 and got off at Division and parked on Goose Island and walked up to Cortland Street.) 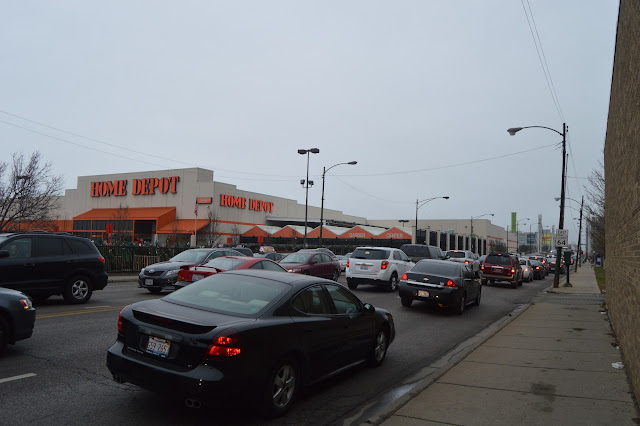 This post answered my question about what used to be on the Home Depot land.
Irene Gazdziak posted five photos with the comment: "Here are some pictures of the Procter and Gamble plant that was at 1232 W. North Avenue in Chicago. Also showing pictures of various products that the company used to make.  The North Avenue plant closed in 1990."

Posted by Dennis DeBruler at 8:51 PM