The southernmost extent of the Wisconsin Glaciation was just northeast of Shelbyville, IL. When the glacier retreated, it left a terminal moraine. The Kaskaskie River eroded part of that moraine, but the US Army Corps of Engineers Visitor Center is built on a part of the moraine that was not eroded. The location of the dam was determined by the terminal moraine and basically refilled what was eroded away by the river.
This picture was taken from a deck on the backside of the visitor center and shows how it was built along the edge of the terminal moraine. The lake fills a basin that was carved by the glacier. 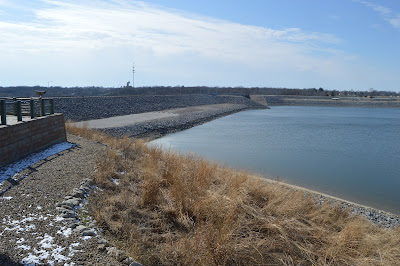 This is the view in the other direction showing the upstream side of the dam. You can see the entry for the spillway in the distance. 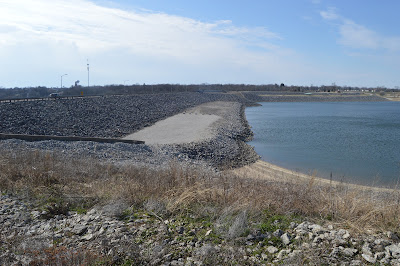 After walking downstream to be in line with the dam, I took a sequence of three pictures starting with this view along the dam. Then I turned a little to my left... 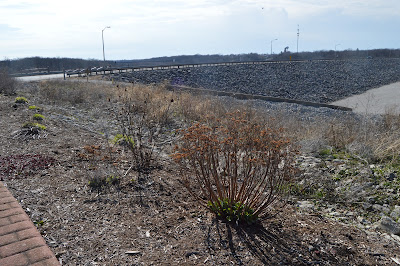 ...to take this view. You can use the steeple of the courthouse to determine how the views overlap. I emphasized the foreground because the sky was boring. 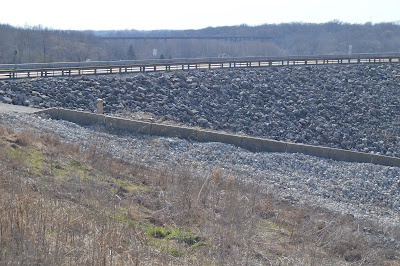 I took this view after turning even more to my left to capture the UP/MoPac/C&EI Trestle top just below the skyline. 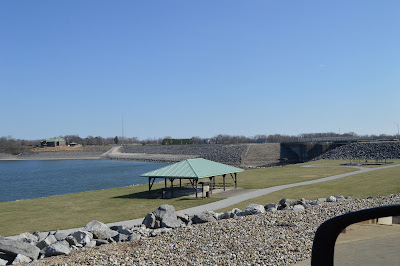 We drove on the road that goes across the dam and this is the view from the parking lot for the pavilion. You can see the entry to the spillway to the right of the pavilion roof and the visitor center on the other side of the lake. This pavilion is an example of a resource that is available most of the years but would be under water during a flood control event. 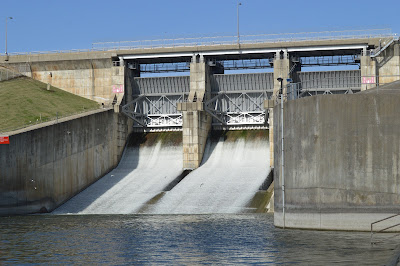 Since the water flows were relatively low, the gates across the road going down beside the spillway were open. Looking at a satellite image, you can see the stairway that lets you walk down the concrete embankment to the water's edge. This picture was taken from the bottom of that stairway. It appears that the visible Tainter gates were slightly open but the other one may have been closed. 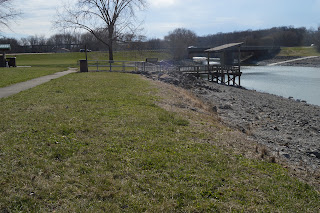 To answer this question, I went downstream to the wheelchair accessible fishing dock --- the wooden platform by the river. The bridge behind the roof is IL-16, and we can see the top of the train trestle through the trees in the left background. 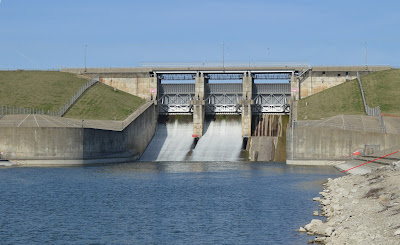 We can clearly see that the third gate was closed and that the leaks are very small. I added a red line on the right to show the stairwell that I walked down to take the first photo of the spillway gates. Below is the sign that is on the walkway to the fishing dock. 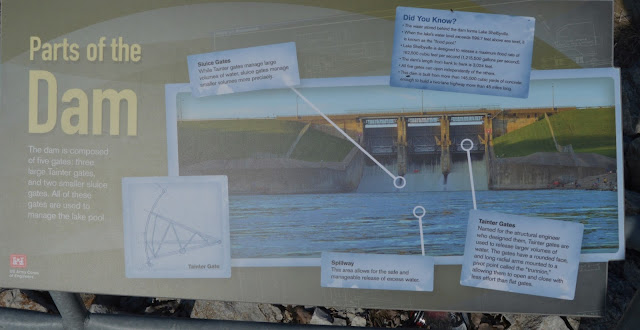 Note the sign indicates the spillway capacity is designed to handle 162,500 cubic feet per second.
Checking another satellite image, we see both sluice gates are open. And it looks like the flow from the one gate above is a partial flow. 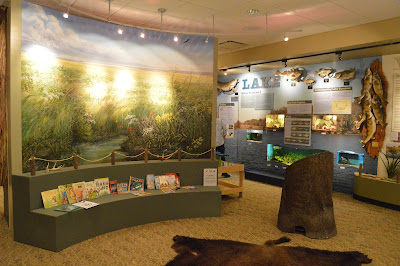 There is a large room in the visitor center that has exhibits on several different topics such as the wildlife in the area, the glaciation where I got the information I used above, the history of flooding that motivated this as one of three dams built along the river, the construction of the dam, etc.

This river was included in the Flood Control Act of 1938. But WWII precluded any action. Floods in 1943, 44, 46, 47, 48, 49, 50, 51, 57, and 58 motivated the Flood Control Act of 1958. Construction started in 1963 and the lake was open in 1970 "for millions of visitors to enjoy." The exhibit has a picture of  a flood and the water is just below the roofs of the houses. It also mentions the force of the river's flow would push buildings. Holding back flood waters not only helps this river, but also the Mississippi River.

One of the signs provided the information:


(Sorry about the numbers not being right justified, I wrote HTML in the 1990s, and I have learned that I have become rather rusty.)

The sign uses both the terms Recreational and Summer for the high normal level and Conservation and Winter for the low normal level. Since a fisherman I talked to about water levels used the terms Winter and Summer, that is what I used in the table. He said the lake was at the normal winter level. 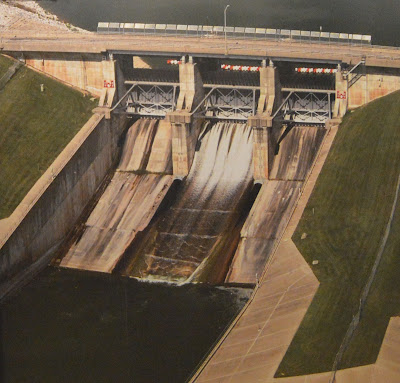 This is part of the sign you see when you first enter the exhibit room. As you can see, only one gate was raised a little bit when this photo was taken.

This is my opinion as to how the dam would be operated.

During the Winter. the level is allowed to fall to 594 so that the lake can absorb the Spring rains and snow melt without exceeding the normal max flow rate and not rising more than six feet.  After the wet season, they reduce the flow to the normal minimum and allow the level to go up to 600 feet because that is what the fishing docks, boat launches, etc. are designed for. If they would have to exceed the max normal flow to maintain 600 feet, then they close the recreational areas and allow the level to rise. If the lake level reaches 626.3 feet, then they would increase the flow up to the 162,500 cfs capacity of the spillway to maintain that level. If, at 162,500 cfs, the level rises above 626.3 feet, then they loose a lot of sleep at night because if it would rise another 17.7 feet, it would breech the crest of the dam. Actually, looking at the spillway, the earth berms on the side would be compromised before the crest is reached. By definition, the level should not exceed 626.3 feet because the spillway is supposed to be designed to handle the worse case scenario.

To put 162,500 cfs in context, the maximum capacity of the Oroville Dam is 160,000 cfs. [Video] The Oroville Dam's spillway was passing less than half its capacity when it broke apart.

The other side of the coin is the years that have little snow and rain. That is why they don't allow the level to fall below 594 feet in the Winter. During the Summer, they would use the sluice gates to draw down the lake to maintain a minimum flow in the river.

Email ThisBlogThis!Share to TwitterShare to FacebookShare to Pinterest
Labels: wwDamEarth