(Update: Chicago Union Station is the other terminal for the BNSF's commuter service.)

Aurora is the end of the line for the commuter service that BNSF runs for Metra. Since this is a daytime shot, the yard is empty because all of the commuter trains are parked down by Union Station, the other terminus of the commuter runs.
But the Birds-Eye View must have been taken on a weekend when a lot fewer trains run.
In the Spring, the warm days tend to have rain and the sunny days tend to be cold. As a good April Fools joke, we finally had a warm and sunny day on a weekend, so I went to take some pictures in the Aurora area. (It was still cold by the lakefront.)

This view is looking east from the Wood Street Bridge. The three tracks on the right are the "Racetrack." The three track mainline between Aurora and downtown Chicago. The two on the left are for the commuter (Metra) service. You can see an embankment in the middle because the Racetrack is starting its elevation through Aurora. I also noticed that the M3 (southern most) track is using concrete ties. This is the first time I have noticed BNSF using concrete ties. When they moved the tracks in Joliet, UP used concrete ties but BNSF still used wood ties for the new track. 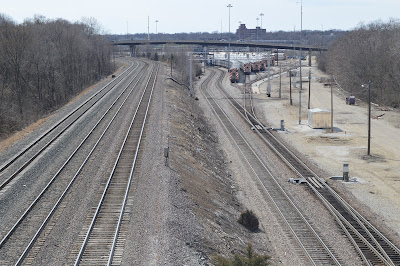 In this view looking west from Wood Street we see the Racetrack continuing to climb to its elevated height in Aurora and the throat to the commuter yard. We also see there is another bridge for me to check out. 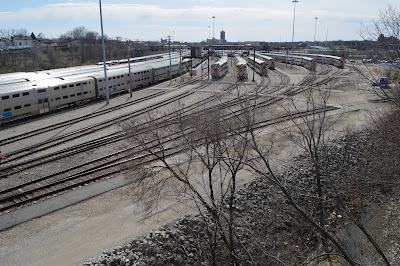 On the High Street Bridge, I first took pictures towards the West as I walked across the bridge. The rightmost track leaving on an angle is a branch line to the north. 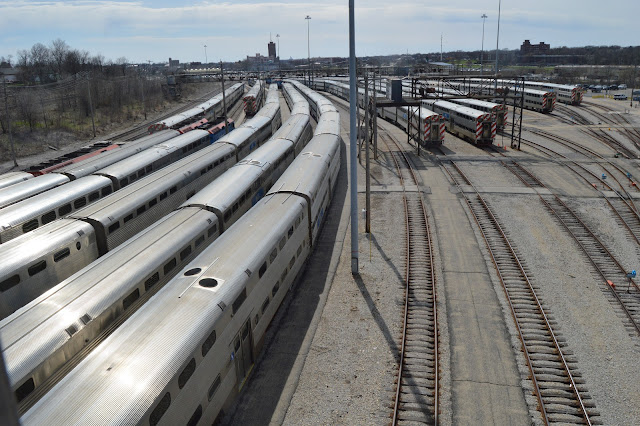 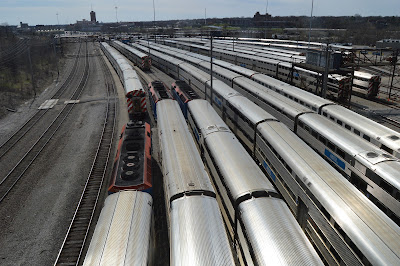 At least some of those diesels were running because I not only heard them, I smelled them. 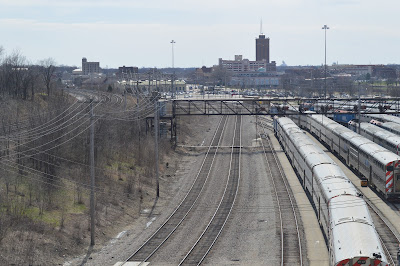 I took a closer view of the bridge across the trains so that I could digitally zoom in on it when I got home. More on this topic later. 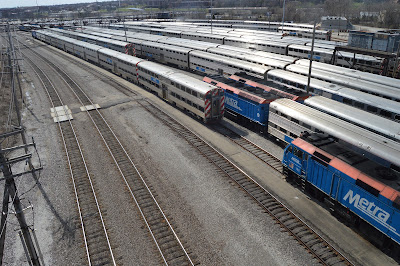 I'm glad it was a little cloudy because the glare would be even worse on a sunny day. (3:11pm sun angle) The sun was to my left, so I still don't understand why I was getting glare off of some of the cars. 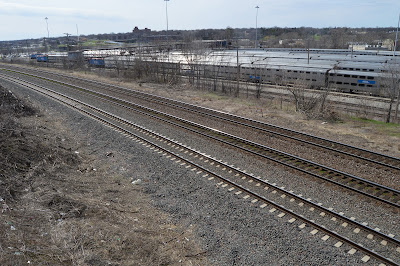 I'm getting close to the end of the bridge, so I took an overview shot. This is where I first noticed the concrete ties. The ties in the foreground have been properly groomed with ballast in the middle. The ties further away still need work because the middle is bare concrete. I read that the ribbon of ballast in the middle reduces damage caused by hanging equipment. 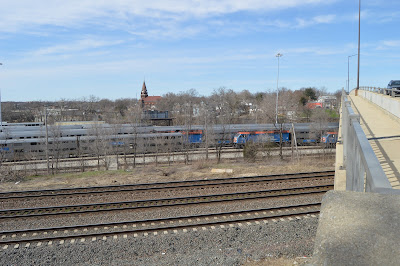 I took this shot along the side of the bridge to catch the diesel that is peaking out from under the bridge. That is probably the one I smelled.

Also note that this bridge has a nice handrail. It is high enough to feel safe, but low enough that it is easy to shoot pictures over it. (The first bridge I shot pictures from was very scary because the handrails were too low. The Wood Street bridge from which I took the first two pictures above had the opposite problem --- a chain link fence that was way over my head.) 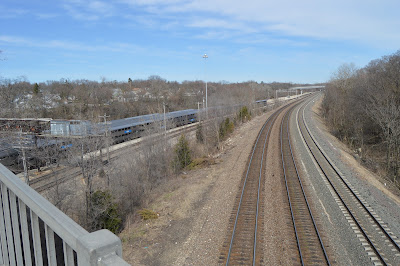 As I walked back to my van, I used the east side of the bridge. 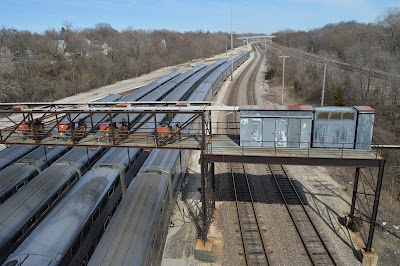 After seeing another bridge across the tracks, it was obvious that the purpose of the bridge is to provide a power connection to the HEP (Head-End Power) cars so that the locomotives can be shutdown. 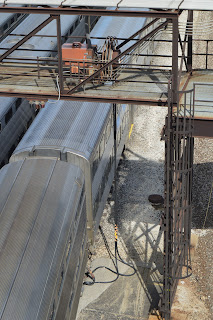 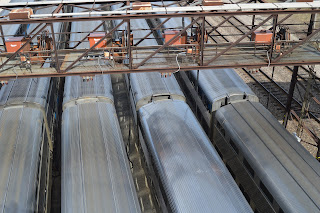 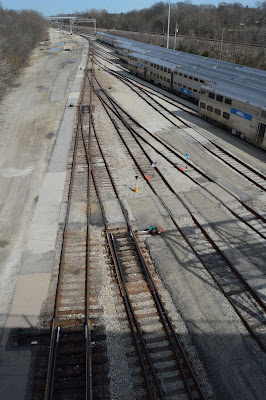 Then I noticed the "blue flags" at the end of each storage track. And beside each blue flag is an orange derail. 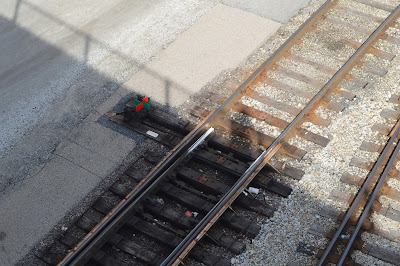 The turnouts on the Racetrack are remote controlled, so this is the first time I have been close to hand-thrown turnouts on the former CB&Q line in the Chicago area. I noticed the ends of the movable rails are painted white. I assume that is to give the engineer another visual clue, in addition to the red/green vanes, as to the position of the turnout. 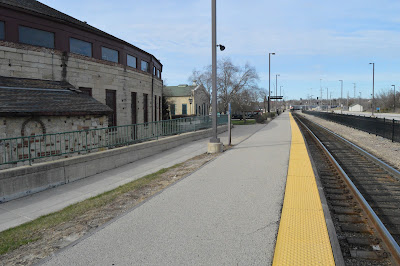 Later (5:00pm), after taking pictures of dams, bridges, etc. in Aurora, I stopped at the Two Brothers Roundhouse to take pictures of it. My eye caught the motion of a train leaving the platform. 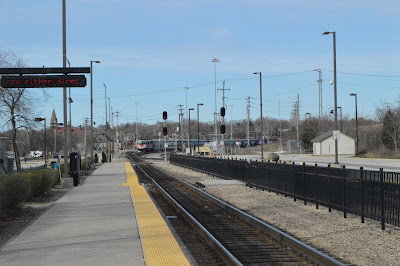 So I moved down the platform as quickly as my now sore left knee would allow because I recognized the paint scheme as locomotive #183, the new rebuild. I wanted to get a closer shot before it disappeared around the curve. 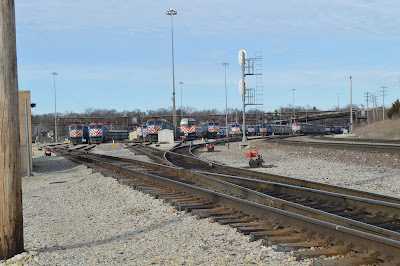 Fortunately, it was being parked for the night so I had plenty of time to get to the end of the platform for a closeup. 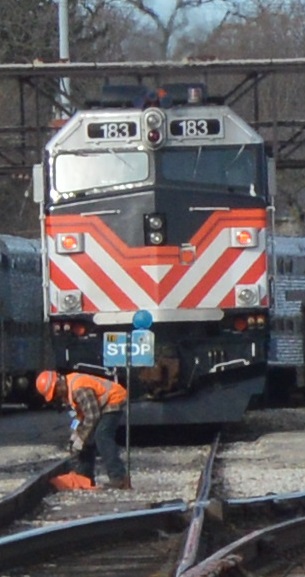 Digitally zooming in to camera resolution, we see the worker has already placed the "blue flag" and is now setting the derail. 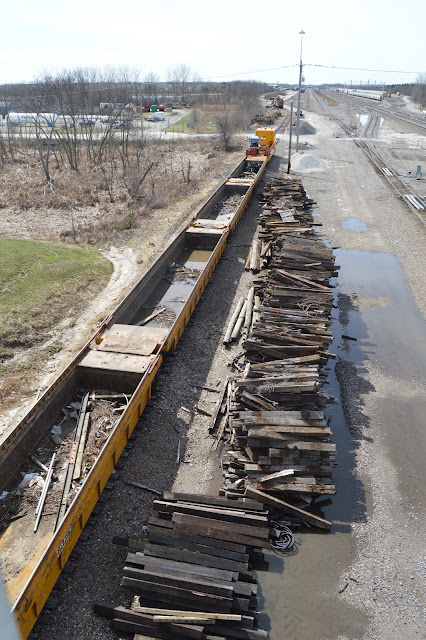 Because of Kevin's photo above of a slot machine, I include the shot I took of one parked at the east end of Eola Yard. 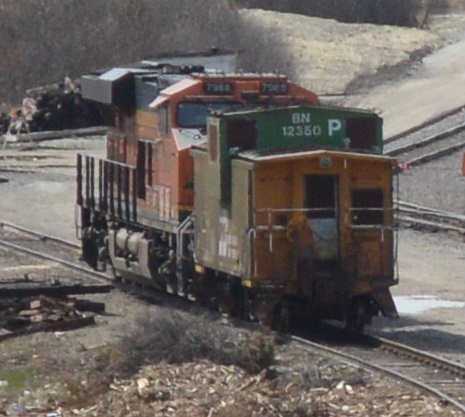 In the background of the above picture on the same track was locomotive 79?5 and caboose 12350. I think the "?" is a 5 or an 8. Either way, the locomotive is a GE ES44C4 built in 2015. This picture is from the above photo, but digitally zoomed in to camera resolution.
Update: I learned from Robby that the Aurora end is called Hill Yard:

Posted by Dennis DeBruler at 4:05 PM