Modern windmills generate electricity. But before farms where electrified, many farms had a windmill to pump water. Below is a closeup of the pump in the base of the windmill to the right.

Both my grandparents and my wife's grandparents had windmills on their property that we can remember seeing. This windmill and pump below are near the J.H. Hawes Grain Elevator in Atlanta, IL. 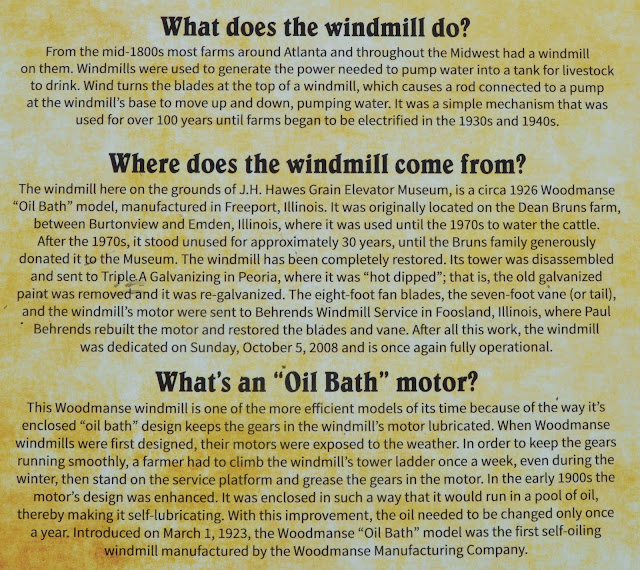 
The Challenge Windmill Company, Batavia - This property that is known as the Challenge Windmill plant has had a colorful history. In 1857, Nelson Burr founded the first wooden pump company which grew to become Challenge Windmill and Feed Company. At that time, the plant was powered by water and wind. The buildings at one time covered over 165,000 feet on eight acres. Since then the wooden and other structures have all been removed. The 515 building was a foundry and the 525 building was a wood shop powered by the mill race below. The 415 building was a machine shop, also powered by a water turbine. The 335 building was for assembly and storage. The company prospered until the early 20th century. During World War II, munition shell casings were produced in the foundry. This is where the colorful part of the Challenge Co. starts. In 1946, Dr.Henry Garsson, Murray Garsson, and Congressman May were found guilty of conspiracy to defraud the government and war-bribery. During the war, they had fraudulently obtained $78,000,000 in war contracts. The Challenge Co. was one of several companies that they had purchased with no funds of their own. The trial heard over 100 witnesses and lasted over eleven weeks. Witnesses included General Eisenhower, Secretary of State George C.Marshall and Secretary of War Robert Patterson. In 1949, the property was purchased at an auction and the buildings were leased for manufacturing and warehousing to multiple tenants. In 1992, the conversion to office use started.


You can tell that this plant used to use water power because of the dam and the tailrace on the right.


Batavia was "the leading windmill manufacturing city of the world."

Update:
When the tail is parallel with the blades instead of perpendicular to them, that means the windmill has been taken out of service.

Flint & Walling in Kendallville, IN also made windmills.