(Update: in 1947 the Des Plaines River was to the top of the rails of this bridge.)


I didn't notice until I looked at the satellite image that there is a set of unused piers downstream of the existing bridge.

I struggled to get a photo of the upstream side from Canal Bank Road. The struggle was trying to find a break in the treeline along the bank. This is the best I found with the restriction of staying on the road. 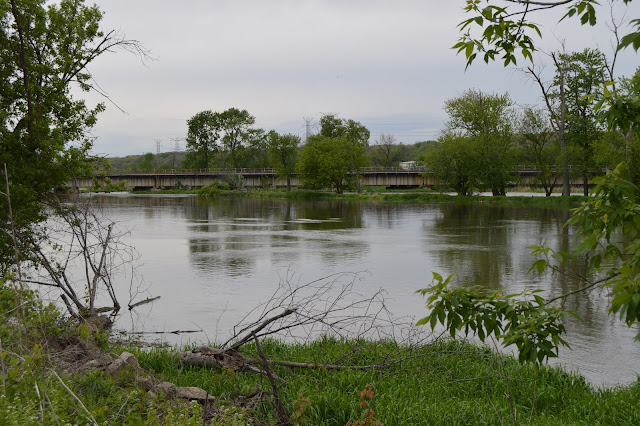 I went back to a 1938 aerial photo to see what was on the old piers. To my surprise, the bridge had already been replaced with the current bridge that provides a more gentle curve for the approach. Or the piers were for an old interurban railroad. But the only interurban I have read about in this area stayed on the south side of the river and canal.
2021 Update:
AJ Grigg's theory is that the lost bridge was for a branch to access a quarry. (source)
My theory is that it was part of the effort to relocate the Des Plaines River to make room for the Chicago Sanitary & Ship Canal.
Update:


Halsted Pazdzoir posted a photo of the Oct 9, 2019, LCHI105 on the Des Plaines River bridge. I (almost) caught the same train moving fast in Romeoville, IL. The lead locomotive, a covered hopper, and the shoving platform were Cascade Green. The green covered hoppers I have seen in the past were old BN cars. This one had a BNSF livery. All of the BNSF grain cars that I have seen before were brown.
https://www.youtube.com/watch?v=aOSgJTFxZnU

William Brown The Covered Hopper is a Sugar Car.
Sean Ross The very first BNSF hoppers were green, some with large logos, some small.

I have to figure out how they are getting to this spot along the river.

I was going to skip yet another set of old paint jobs until I realized these were pulling a stack train rather than a local and Stan provided some insight into train operation.

Posted by Dennis DeBruler at 3:05 PM