(Satellite, it used to occupy the entire peninsula)
There are photos of products being shipped from here in Manitowoc Great Lakes Ports.
I recognize the name of Manitowoc as a manufacturer of submarines during World War II when I studied the swing bridges on the Sanitary and Ship Canal. Getting those submarines and other Navy war production down the canal required making the swing spans movable. Some sources said they added motors to the bridges while other sources say they just used boats and cables to move the spans. (Remember, the St. Lawrence Seaway was not opened until 1959.)
Ben Stalvey posted two photos with the comment: "A inside look at the old Manitowoc Engineering Assembly Bay. Along the Manitowoc river."
Ben Stalvey

This building is still used to this day. Building and assembly of wind tower section now.


Manitowoc could not find a crane big enough to meet their ship building needs, so they engineered and built their own big cranes. [FacebookPosting] Since there was a market for big cranes, they started producing them as well. As they grew, the shipbuilding operation was moved to Sturgeon Bay, WI.

Before it made 28 submarines, Manitowoc was making other maritime equipment such as the big ferries used by the C&O's Pere Marquette. [Wikipedia]
Paul Erspamer posted a history and 23 photos. And each photo has a comment.
Notes for specific Manitowoc products:


A little Manitowoc history. Did you know Manitowoc also made Tunnel Boring machines? When crane production got slow in the 80s. Manitowoc was contracted out to do heavy fabrications. These picture above were the first TBM they had built. Manitowoc also built several automotive stamping presses...

Gerry Celia Did you know that Manitowoc made submarines during WWII? The took them by barge down the river to New Orleans and launched them, after sea trials in the lakes.
Bill Pohlmann They also built LCTs and YO self-propelled fuel oil "barges", and across the river Burger Boat built another 55 boats including minesweepers, ASW craft, tugs and various other utility vessels. My grandfather worked at Shipbuilding during the war, riding a bus up from Milwaukee every day with many others. My other grandfather worked at Allen-Bradley making Norden bombsights. Unlike more recent wars, it was an effort that truly involved the entire country.
Steve Khail Gerry Celia, not by barge but by a special floating pontoon.

This photo shows why they moved ship building to Sturgeon Bay, the ships were growing too big to get down the river. It looks like the Edward L. Ryerson, which was the last ship built here.

Manitowoc is moving the manufacturing of its crawler cranes to Shady Grove, PA. I have not been able to determine if anything else is manufactured in Wisconsin. Or if the town will be left with just paper-pushing (keyboard-pounding) jobs. Now the Wisconsin facility is for sale. The fact that the offer includes "corporate office space" makes one wonder about the retention of headquarters and engineering in Wisconsin. Unfortunately, it is a link to a closed group, but I want to save Ben's history and photos about the shipbuilding, which was moved to Sturgeon Bay WI in 1972. In 2008 the whole shipbuilding and marine division was sold off.

The peninsula is still used for heavy industry. One product is windmill towers and I have seen pictures of them being loaded on a barge. So they still take advantage of the peninsula's access to the Great Lakes.
Update:

Ben Stalvey posted two photos with the comment: "It took Manitowocs to build Manitowocs. This was a shot of construction of Manitowoc Engineering. Along the Manitowoc River."

Ben Stalvey posted two photos with the comment: "The good old assembly days down at Manitowoc Engineering."
Reuben Zimmer It’s hard to believe how many cranes rolled out the doors I those days.we shipped more cranes and attachments in a Month. Than they do in a year.


Frank K Messercola They also make ice machines for hotels and restaurants.
John Hopkins Manitowoc Food Service is now Welbilt and headquartered in Florida. It is no longer associated with the Manitowoc Company but rather a separate publicly traded company.
Thomas Catras We had a Manitowoc ice machine behind the bar at our old union hall. Louder than a 4600. Business manager used to demand it be unplugged during union meetings.


Ben Stalvey posted four photos with the comment: "Blast from the past some 4100 Ringers loading out of Manitowoc WI."


Ben Stalvey posted seven photos with the comment: "How we use to do it in Manitowoc WI. Sad all good things come to a end. So much history and past with crane building. All production of crawler cranes has been moved back in 2017."


Ben Stalvey posted three photos with the comment: "Of course when you need a big crane to install some massive machinery in house. Why not just bring in a 400W. With short hammerhead top. Manitowoc sure comes up with everything. This one was being used at the Manitowoc Engineering plant. Year 1985 in the 4600 shop"

Ben Stalvey posted two photos with the comment: "Some other massive weldments made by Manitowoc Engineering. Back when times were tough, diversify."
Kevin P. Moller Welded on many debarking drums...my first job as a journeyman welder/set-up, after finishing blueprint class was the cutterhead for the Robbins Co.
Roger Thompson Debarking Drums for the forest industry and Bow Thrusters for ships.
Brian Peterson I see those now thrusters on the ore boats on Superior. They dock those 1000 footers like a fishing boat!


Well it's throwback Thursday everyone. Blast from the past this was taken in December of 1980. Manitowoc Engineering along the peninsula. Maybe some of you employees remember this day. Not everything goes great in the test yard The massive crane in the background is a Manitowoc 7000 and one wrecked Manitowoc 3000.


Ben Stalvey posted eight photos with the comment: "How technology has changed in time building Manitowocs. Various pictures of some Manitowoc Cranes/ Engineering employees. Also some other weldments Manitowoc worked on such as automotive presses and debarkers."


Ben Stalvey posted three photos with the comment: "Here it is blast from the past. From Manitowoc WI. Location the Manitowoc Engineering plant. Along the Manitowoc River..." 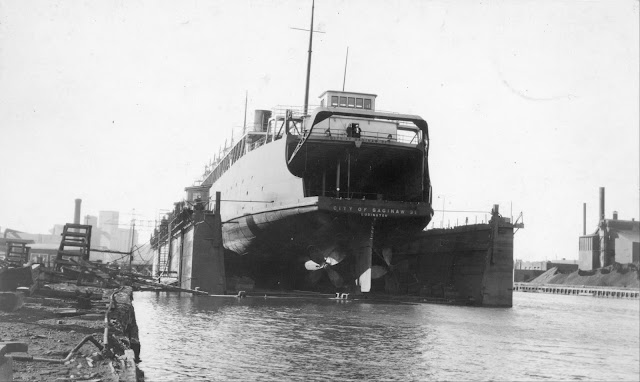 Manitowoc Herald Times
Thursday August 12, 1954
Launching set or self-unloader on September 9
Manitowoc A $7,000,000 steel self-uloader, building at the yards fo the Manitowoc Shibuilding Inc., for the American Steamship Company of Buffalo, N.Y. will be launched Thursday noon, Sept. 9.
The 606 foot freighter, a sister ship of the 639 foot John J. Boland, build here, which went inot Great Lake service last year, will be christened the “Detroit Edison” by Mrs. Walter L. Cisler, wife of the president of the Detroit Edison Company of Detroit.
The new ship will be for delivery at the opening of navigation i 1955. IT will join the fleet of the owners, the American Steamship Company, formed by Adam Cornelius and John J. Boland in 1907. Cornelius in now deceased.
\The “Detroit Edison| will be powered with 7,000 horse power steam power drive. It will have a capacity of 16,500 tons of coal or 20,000 tons of stone.
Many officers and directors of the American steamship Company which operate a fleet of 17 great Lakes ships will be her for the launching.
Keel of the new self-unloader was laid July 29 1953, on the same berth from which the John J. Boland was launched
Officers of the Manitowoc Shipbuilding Co., Inc. will be hosts to the visiting officials of the owners and thier guests at a luncheon following the launching.
The American Steamship Company for years has concentrated on self-unloaders. Fifteen of the company’s ships are that type of construction
THese pics came from Doreen and Ralph Rice

From my understanding Manitowoc launched the first boat from it’s side.
The Sundae was first served down the road at Two Rivers, Wisconsin on a Sunday afternoon.


Meacham has a couple of photos from when Manitowoc was still building boats here including the first side launch of a submarine.

A photo tour of their current (Grove, PA) factory (source, the comments blame Carl Icahn for destroying the jobs in Manitowoc, WI.  Another posting of the link)

Don Clark posted a request for unconventional Manitowocs. He got several examples in the comments.

Video of a tandem lift loading a self-unloading boom onto a barge So some of the former crane boom welders get to use their old skills?


In Sept 2020, I got hit with a Double Doomsday. Both Facebook and Google changed their software. I said "changed" instead of "updated" because the new software is not better. In fact, Google's Blogger software is far worse except for a search function that works. Specifically, it has three bugs concerning photos and their captions. So I'm no longer copying photos and interesting comments from Facebook. I'm just saving the link. I hope you can access posts in Private Groups.
A 1968 photo of the peninsula that includes all of the movable bridges and a couple of ships.
A couple of photos of cranes on barges
Ben Stalvey posted five photos that include a USACE elevated cab 3900 crane on a barge and two 888's helping to build the Konecrane.
Posted by Dennis DeBruler at 7:48 PM