There used to be a relatively complicated signal bridge and track work just west of Forest Avenue in Downers Grove, IL. When BNSF updated the track signals for Positive Train Control, they removed the complexity (three signal heads per track and interlocking tower) left over from the days when Downers Grove had team tracks and industry near downtown and a commuter coach yard. One thing they did not remove was the insulated joints just west of the Forest Avenue crossing.

On 2017 Dec 13 I caught them near the end of installing a short rail segment in the middle (M2) mainline track. I'll have some closeups of this later. At the time, I guessed that they were adding a segment of rail to lengthen it since I think they had a rail pull on M2 just a couple of days earlier.
But the next day, when they were working on M3, I learned that they were replacing insulated joints rather than making the rail a little longer. While looking for a parking spot near Forest, an eastbound intermodal rolled through. 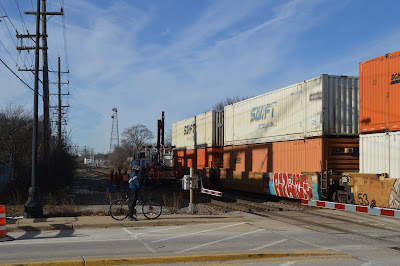 This train was rolling right along. The end came at 12:11:02. (Sometimes intermodal trains, even westbound ones, go remarkably slow through Downers.) Note how the track workers are standing to the side while it rolls by. 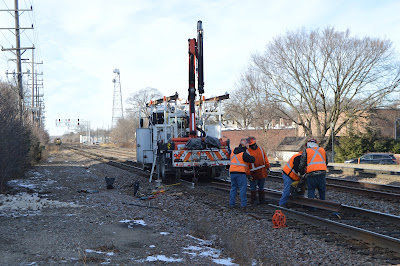 They were getting ready to cut the replacement rail to length. Note the crane is not in its parked position because it was used to get this rail off the rack on top of the truck. And it will soon be used again to pick up the two pieces of rail.

The lights in the background are for a ballast regulator that is helping a tamper level the track. That is, BNSF is making good use of a maintenance window on a mainline track by having different crews fix different problems at the same time. 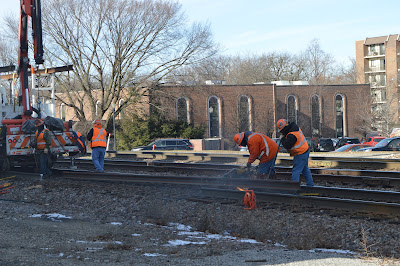 12:14:14  I let the video run long enough that you could see how quickly they made progress. Then I walked around to get shots of the action from different angles. Note I carefully stayed at least 15 feet from the track because that is the normal boundary line for a railroad. You can see the sparks flying down below the rail he is cutting. The tool is powered by hydraulic hoses that come off a winch at the tail of the truck. 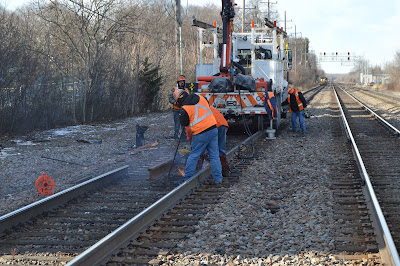 12:14:28  It's hard to see the "blue smoke" that is floating in the wind. But I could smell that I was downwind of the cut when I was beside the rail. So I went back to this angle, which is from the Forest Street crossing. 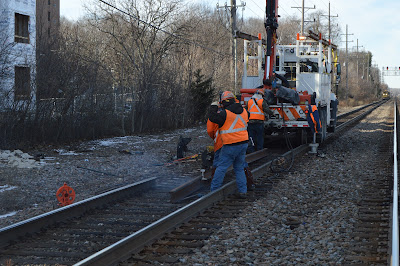 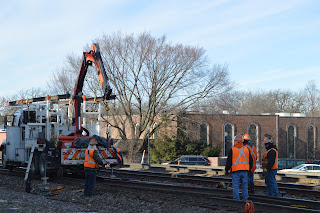 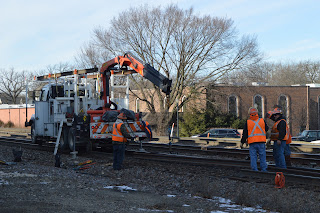 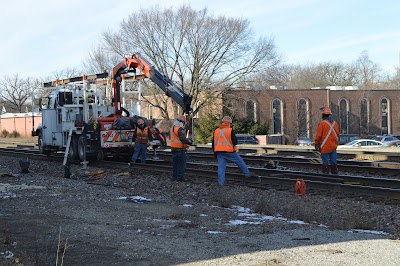 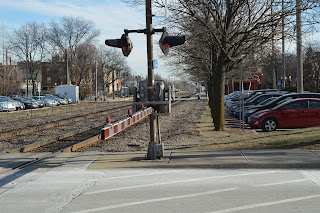 The bells you heard at the end of the video were the crossing gates. I took a picture because I could not see any trains coming in either direction. 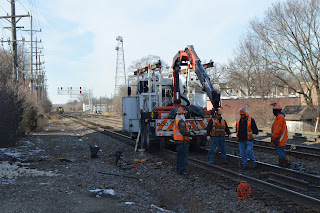 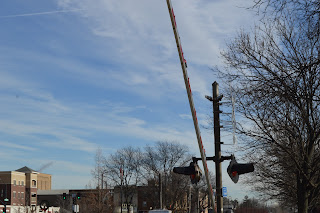 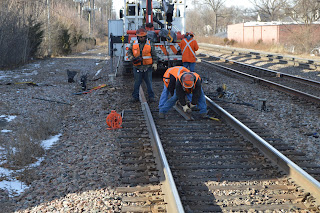 The two guys are pulling the scrap rail toward the truck to get it within the reach of the crane boom. 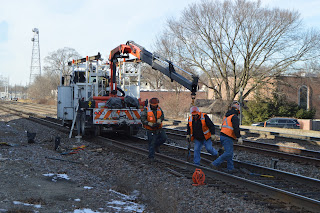 The boom is extended and... 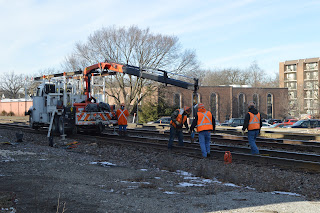 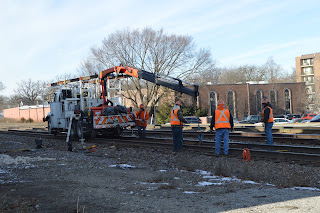 ...grab the scrap rail.
I switched to video to capture a worker using a spike maul. This is just the second time I have seen a worker use a spike maul. Most BNSF workers use either a machine or a sledge hammer on spikes. It turns out he is just starting the spikes and a hydraulic powered tool does most of the hammering. As a bonus, I catch the crane pulling in its boom and placing the scrap rail in the bed of the truck.
(new window) 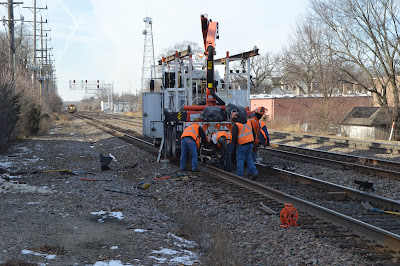 12:27:34  They have switched the hydraulic hoses from the rivet hammer to the bolt-hole drill and are putting the drill in place. 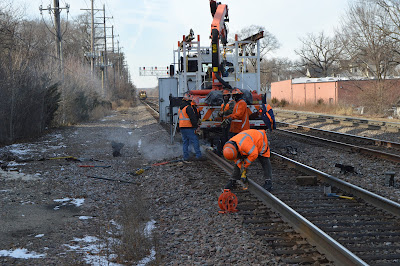 12:28:28  The can hold the cutting oil, and you can easily see the blue smoke that the drill generates. The working on this end of the new rail is using a small grinder to dress the cut. 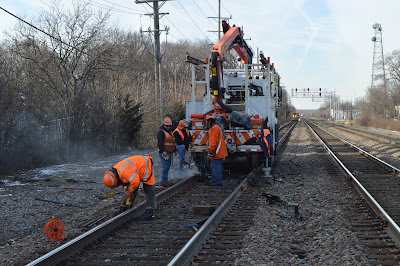 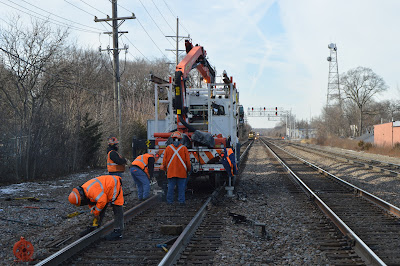 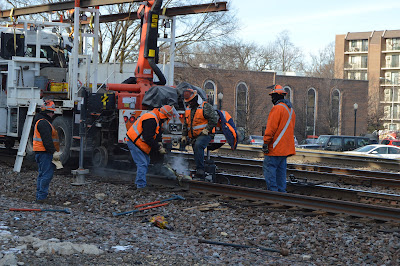 As they place the drill for the second hole, you can see the hole they just drilled to the left of the drill. 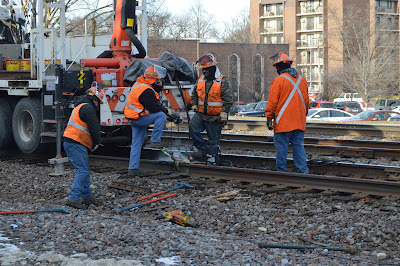 And we are smoking again. It looks like the man with the foot on the lever is taking advantage of the drill time and using his cell phone. And the worker on the left must have dropped the joint bar down behind the "lever man's" other foot. After looking closer, I see the worker on the other side of the rail is also applying pressure with his foot. I assume he is the one that is pushing the bit into the rail. 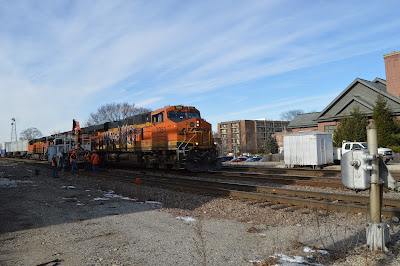 They did move to the side when this intermodal came by. They kept on drilling. 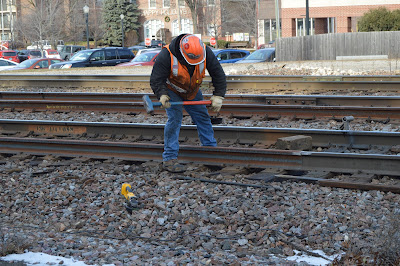 This worker has already added a clamp to the right side of the tie. He is using the sledgehammer to pound the clamp on the left side of the tie into position. Note the grinder tool is in the foreground. I can see some clamps setting on the ballast to the left of the grinder. 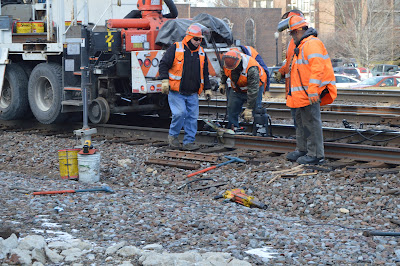 While they were drilling, a worker came over and talked to me. He said that since this is a mainline track, they will put two holes in each side. A welding crew will come by during the night to weld the joint. I asked if they use a truck with a big attachment that comes out the rear or if they use thermite. He said they use thermite welding because the Holland welder is a non-union subcontractor. 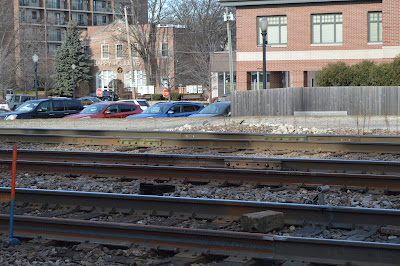 He must have been the foreman because a worker came over to him and asked for some more diamonds. Before I left, it occurred to me that I should get a photo of the two green insulated joints that are still in M1 because they too will be disappearing. I also see I caught an interesting view of the rail cutting tool.

Now that I have seen some of the hydraulic powered tools in action, I take a closer look at the work on M2 the previous day.

The yellow bodied tool laying on the left rail is the rivit hammer. The tool to the right of the worker is the hole drill. I don't know what the tool is in the lower-left corner. The following photo that was taken before this photo gives me a better look at the tools by the truck. 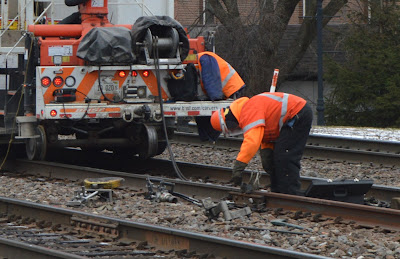 We see the tool that cuts the rail on the left. I think the next tool over is the impact wrench that is used to tighten the bolts that are used to hold the rail joint bar to the rails they just drilled.

I can't guess what the other gizmos are for. It appears the worker is verifying that the new joint has good conductivity. I assume the new signalling system work like the old one did --- it detects block occupancy by the wheels conducting electricity from one rail to the other and completing a track circuit. I've read that trains have to have a minimum number of units to insure that there are enough wheelsets (axles) to provide a good electrical connection between the rails. That would explain why the Hi-Rail trucks don't trip the crossing gates. They have to wait at Main Street for traffic to clear in both directions before they can cross.

Update:
The crossover from M3 (south track) to M2 was just west of the signal bridge that was west of Forest Avenue. The crossover from M2 to M1 was a little further west and merged with M1 before the yard lead left M1. These two sequential crossovers allow a westbound train on any of the three mainlines to enter the yard tracks. The yard is still used to store Maintenance of Way equipment.
I was surprised to learn that the M1-to-M2 and M2-to-M3 crossovers were parallel to each other. They are between the yard turnout and the signal bridge that is on the left side of the photos. These crossovers are the ones Mike caught them taking out and explains why there is so much depth compression in his photo. It would take a long telephoto lens to capture that action from Forest Avenue.

Posted by Dennis DeBruler at 4:13 AM