(Bridge Hunter, Historic Bridges, 3D Satellite)
Officially named the Chief John Ross Bridge because he started the first ferry service here in 1815 and  he led the Cherokee Nation west on the 'Trail of Tears.'.
Completed in 1917 and rehabilitated in 2006. [Bridge Hunter]

I was playing peek-a-boo with the sun during my visit to these bridges. The sun was hidden by clouds when I took these pictures from the riverfront walkway. 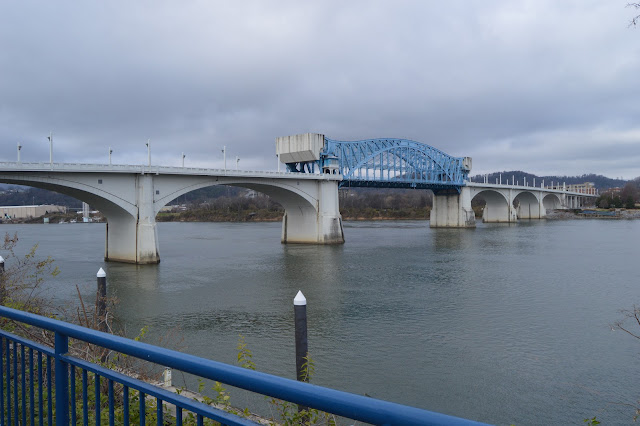 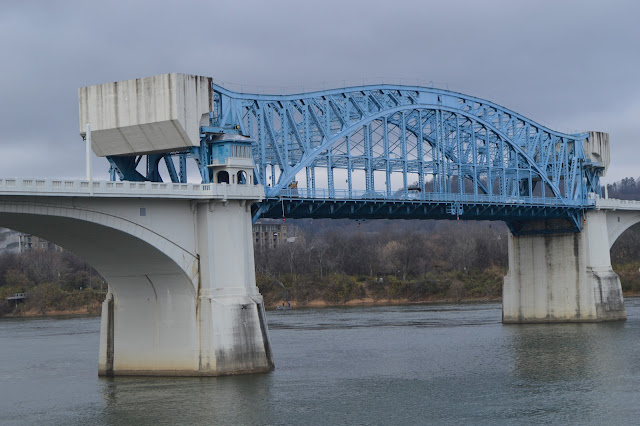 While I was taking pictures on the Walnut Street Bridge of truss details, I noticed the sun peaked out of the clouds to shine on the Market Street Bridge, but by the time I hustled over to the west side of the bridge to get a picture of the bascule spans, the sun was disappearing again. 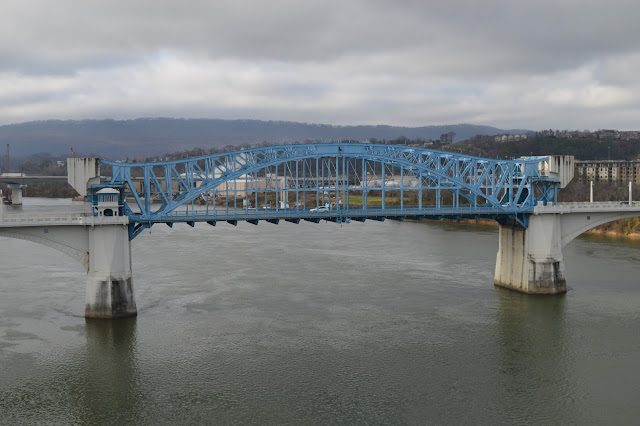 I took a closeup view of the machinery on the south (left) pier, but later, when we were coming back across the the Walnut Street Bridge to the van, I noticed you can see the machinery better on the north pier because the bridge tower is not in the way. Thanks to the resolution of the camera, I can easily zoom in on the machinery part. It is nice that they painted the shaft of the pinion gear yellow because that makes it is easy to spot. It struck me that the rack was rather short. Then I noticed the round member that this Scherzer Rolling Bridge rocks back on was just a 45-degree arc or so. I'm used to seeing that round member in the Chicago area being  closer to a 90-degree arc.

A smaller rolling member means that the bridge's raised position is far from straight up. Evidently, the only time it is raised is during its quarterly inspections. Even then, I can tell by the location of the pinion gear on the rack, they went only half way up the designed angle.

If it never is raised for boats, just for the quarterly inspections, then it really doesn't matter how high it goes.
(new window)


Below this photo of an interpretive sign, I have typed the text. Unlike many major projects, it appears construction continued on this bridge during WWI. 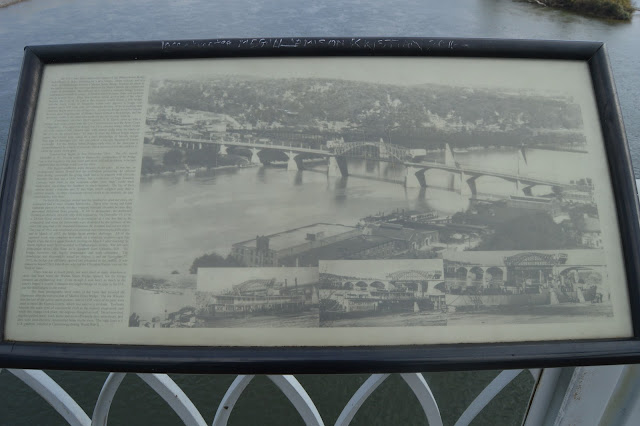 By 1911, load limits and costly repairs of the Walnut Street Bridge led officials to begin planning for a new bridge. Many officials and residents of Chattanooga wanted a Market Street Bridge because so much of the traffic crossing the river was destined for Market Street, the commercial center downtown. But officials also wanted a concrete bridge because maintenance would be easier. A Market Street location, then, was problematic in several ways. First, this location would destroy part of the wharf. Second, the level of the land at this location would dictate a low bridge, and the Army Corps of Engineers would only approve a bridge with channel spans 300' wide with 100' clearance because of the possibility that gunboats might have to travel the river. A concrete bridge would be unable to meet these requirements at Market Street without a drawbridge, and the necessary width of the spans also made the use of concrete unlikely.
Fortunately, the city's chief engineer, B. H. Davis, came up with a design that would please both the City Commissioners and the Army Corps of Engineers. the approved design was for a concrete bridge which would have the required 300' channel span, with shorter spans from the banks of the river to the central piers. In order to meet the federal height requirements, the central span would be a steel drawbridge of bascule design. This type of drawspan lifts, like one side of a see-saw, because of a counterweight. On the Market Street Bridge, each wing of the drawspan is conterbalanced by a block of concrete which moves toward the roadbed as it lifts the center of the span.
Construction began in late November 1914. The city issued $500,000 in 5%, 30-year bonds to finance the construction of the bridge, but as the engineers ran into more and more difficult problems, it became apparent that the bridge would cost far more.
The biggest problems arose because of the piers. In one site, an underground stream flowed into the cofferdam, preventing the concrete from drying; eventually the spring itself had to be plugged with concrete. Another site had, not a solid bottom, but a collection of large boulders. Caissons were built so that workmen called "sand hogs" could work underwater, excavating the boulders to reach bedrock. On top of their caisson rested a concrete pier 55 feet high, which weighed more than a million pounds. As their excavation moved closer to the bedrock, the pier moved down with them.
To build the concrete arches and the roadbed to span the piers, the contractor had to erect wooden falseworks. These were strong and fairly elaborate pieces of work, but they required constant attention because they prevented driftwood from passing. If left to accumulate, the driftwood formed an obstacle movable only with explosives. On December 19, 1916, a 28-foot flood caused driftwood to accumulate at a rate too fast to be controlled, and when the falseworks were dislodged by the pressure of the river, the span had to be abandoned because the concrete had not yet cured. The year of 1916 saw continued cost overruns and construction difficulties, and in March of 1917, the bridge faced another challenge. All of the masonry work was complete and work on the concrete counterweight had begun when the river again flooded, cresting on March 7 after reaching the fourth highest water level recorded in Cattanooga's history. 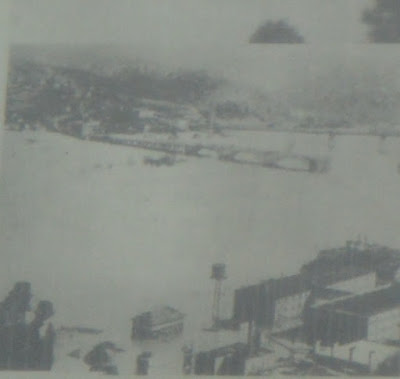 The left inset photograph shows this flood as it appeared from Cameron Hill. The bridge, however, was largely undamaged, and work continued. The drawbridge was successfully tested on August 3, and on November 17, 1917, the bridge was officially opened and presented to the county. It was named to honor Chief John Ross, who led the Cherokee Nation west on the 'Trail of Tears.'
There was not as much pomp, nor were there as many attendees as there had been when the Walnut Street Bridge opened, but the bridge remains an engineering feat. Even though it cost twice as much as the county hoped it would, it remains the largest bridge of its type in the U.S., and the third largest in the world.
The inset photographs show some of the boats that traveled the Tennessee after the construction of Market Street Bridge. The Joe Wheeler was the last of the active steam packets, and in 1920, some of its parts were used to build the Captain Lyerly, which was used as a towboat. Towboats became the main type of commercial craft as the century progressed, and while this change took place, the engines changed as well. Diesel-powered engines pulled heavy loads faster and more efficiently than steamboats, and they were soon the only commercial boats on the river. The right inset is a U.S. gunboat, wharfed at Chattanooga during World War II.


A photo dump of the pictures I took while I walked towards and under the bridge along the riverside trail and then north and back south along the Walnut Street Bridge. 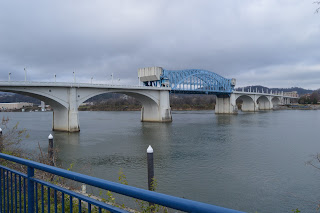 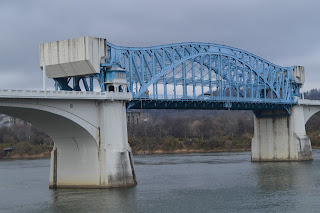 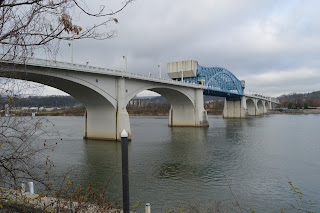 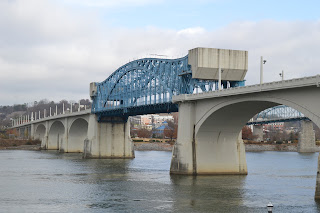 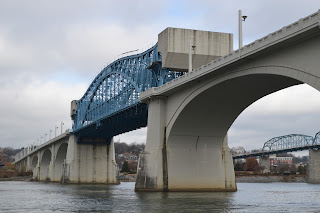 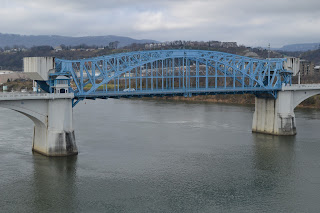 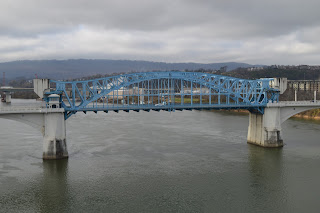 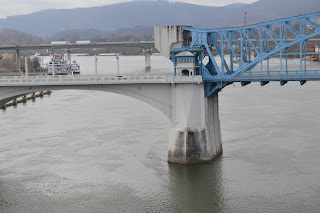 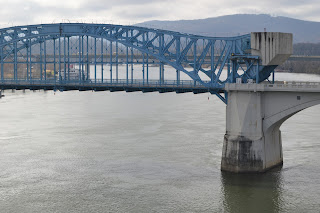 The beam of sun that was peeking through the clouds finally fell on the truss span. So I took pictures as a walked south on Walnut Street Bridge until the sun disappeared behind the clouds again. 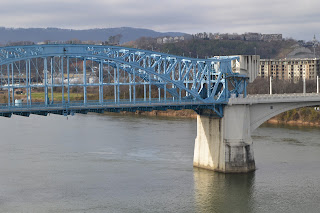 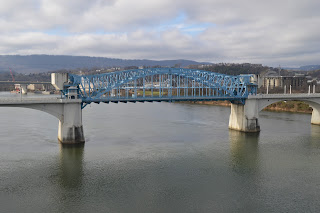 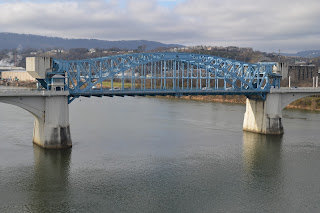 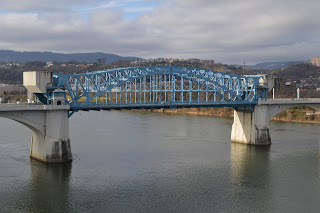 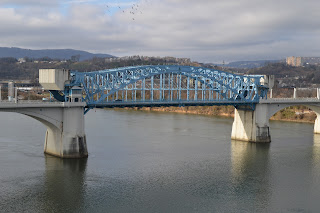 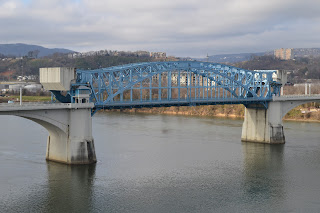 Posted by Dennis DeBruler at 9:57 PM

Email ThisBlogThis!Share to TwitterShare to FacebookShare to Pinterest
Labels: bridgeRolling