This topic tripped my "two occurrences in 24 hours" criteria for a new post. The first occurrence was catching a rail cut close enough to a crossing that I could easily get a legal video.


The second occurance was a Facebook posting about the size of the wheels. From the comments are learned the two sizes are 14 and 16 inches.


I went back and looked at the 100s of photos I took during the weekend when BNSF replaced the crossovers west of Maple Avenue in Downers Grove, IL. BNSF prefabricated sub-sections at the east end of their old yard next to Fairview Avenue. Here we see a track-crew truck on the left and a tie-crew truck on the right. (Both have cranes, but the track-crew truck has racks to carry rail sections on top of the truck.)

I didn't pay a lot of attention to this activity. I was concentrating on them using cranes to carry the sub-sections to the west end of the yard to weld them into a complete crossover replacement. 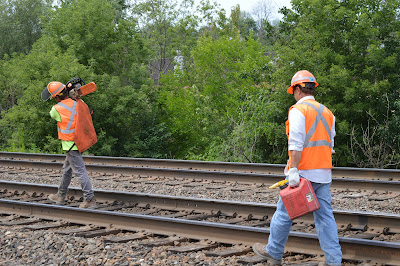 And then watching them move the crossover replacement down the track to where it was going to be installed. I noticed these workers carrying a tool and its gas down to the crossover location. I doubt if they were going to use that Stihl chain saw to cut trees. It makes sense they would do the last precision cuts when the new crossover is in the gap made by removing the old crossover. Zooming in on the blade, it has fine teeth. I assume it is either carbide or diamond-tipped teeth.

Posted by Dennis DeBruler at 1:24 PM