Along the River Walk near Walnut Street Bridge is a sign about Ross's Landing. 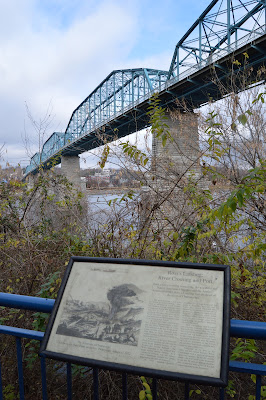 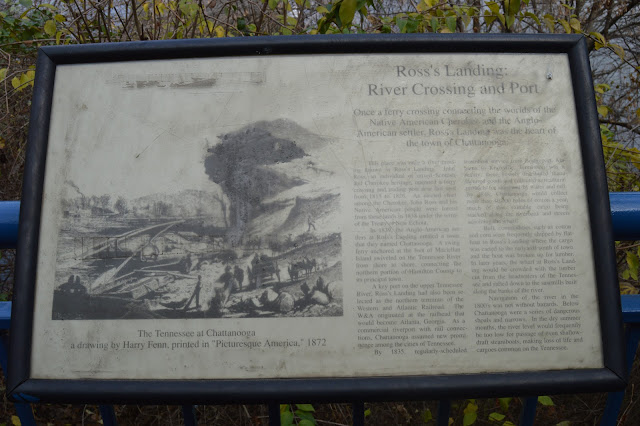 Medium text: Once a ferry crossing connecting the worlds of the Native American Cherokee and the Anglo-American settler, Ross's Landing was the heart of the town of Chattanooga.

Small text:
This place was once a river crossing known as Ross's Landing. John Ross, an individual of mixed Scottish and Cherokee heritage, operated a ferry crossing and trading post near this spot from 1815 to 1826. An elected chief among the Cherokee, John Ross and his Native American people were forced from these lands in 1838 under the terms of the Treaty of New Echota.

In 1839, the Anglo-American settlers at Ross's Landing created a town that they named Chattanooga. A swing ferry anchored at the foot of Maclellan Island swiveled on the Tennessee River from shore to shore, connecting the northern portion of Hamilton County to its principle town.

A key port on the upper Tennessee River, Ross's Landing had also been selected as the northern terminus of the Western and Atlantic Railroad. The W&A originated at the railhead that would become Atlanta, Georgia. As a commercial riverport with rail connections, Chattanooga assumed new prominence among the cities of Tennessee.

By 1835, regularly scheduled steamboat service from Bridgeport, Alabama to Knoxville, Tennessee was a reality; these vessels distributed manufactured goods and collected agricultural products for shipment by water and rail. By 1848, Chattanooga would collect more than 10,000 bales of cotton a year, much of this valuable cargo being stacked along the riverbank and streets adjoining the wharf.

Bulk commidities such as cotton and corn were frequently shipped by flatboat to Ross's Landing where the cargo was carted to the railyards south of town and the boat was broken up for lumber. In later years, the wharf at Ross's Landing would be crowded with the timber cut from the headwaters of the Tennessee and rafted down to the sawmills built along the banks of the river.

Navigation of the river in the 1800's was not without hazards. Below Chattanooga were a series of dangerous shoals and narrows. In the dry summer months, the river level would frequently be too low for passage of even shallow-draft steamboats, making loss of life and cargoes common on the Tennessee.

Posted by Dennis DeBruler at 10:52 PM