In captions of constructions photos, I see the adjective VICON used in front of several of the older Manitowoc crane models. I finally came across an explanation of this technology. Today VICON is obsolete because I have noticed that hydraulic motors are used for all rotating functions, even the crawler tracks. The only thing the power plant turns is a hydraulic pump.

<ignore why="It is wrong but I can't make myself delete it because I'll need it when I describe cranes before VICON">
I believe the components labelled drives are clutches. That is why these pre-hydraulic designs are called "friction drives." Clutches are plates of metal that are shoved against each other so that the friction between the powered plates cause the driven plates to turn. The levers in cranes since the days of steam power control the spacing between the clutch plates.

I drove enough tractors on my Grandfather's farm as a kid that I could drive stick-shift cars. This got me a high school job as an attendant in a parking lot where only the attendant's parked the cars because the parking spaces were so tight. I learned that with a clutch you can control the speed of the wheels. With an automatic transmission with a torque converter, you are controlling the torque, not the speed, of the wheels. You do not notice a difference between controlling speed vs. torque until you are on a slippery surface because of ice and/or snow. It is a lot easier starting the car if you can maintain a steady, slow speed. With an automatic transmission, the wheels would go from not turning to spinning in place once the torque overcame the starting friction. (BTW, controlling speed instead of torque is why locomotives switched from DC (torque) to AC (speed) as soon as the electronics where developed to handle lots of horsepower.)
</ignore>

(Update: A "DropBox" of drive diagrams from a William Platou posting.)

This is a Liebherr crawler I watched work this past Summer and Fall. Unfortunately, the owner, Creative Crane & Rigging, painted over the model number. But their web site indicates they own just one crawler --- 150 ton.
I chose this photo because it gives me a good view of the top of the housing.

On the left is the winch for the boom. In the housing are two winches for hoist cables. On the boom is a third hoist winch that is not being used for this job, but it gives us an excellent view of the hydraulic motor that drives the hoist winch.
This is a photo of a Grove GMK6300L removing its block after installing air-handling equipment at our local high school.
It gives me a good view of the hydraulic motor for its hoist winch.
A saw a Terex crane lifting roof repair equipment to the top of a six-story apartment building. In this view, the hydraulic motor for the hoist is peeking out to the left of the counterweights.
This view has a better angle, but it also has the bane of construction site photography --- chain link fence. 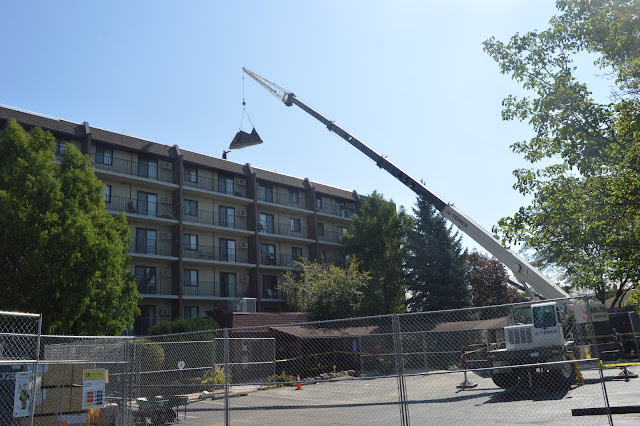 I took pictures of a Grove GMK 3055 driving away from a construction site so that I could catch the different steering modes in action. I got a good side view as it drove down the street.
If the round thing near the top is the hydraulic motor for the hoist winch, it has a rather different design. All of those hydraulic circuits on top of the control box are for the outriggers on this side of the crane. 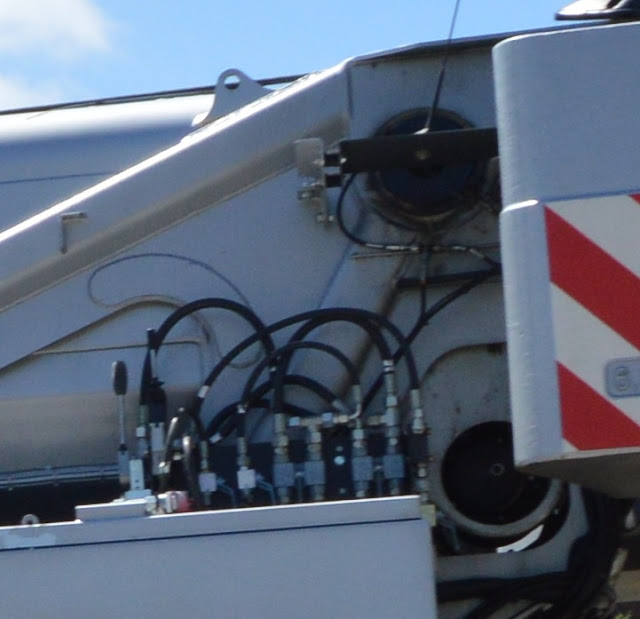 The village allowed the crane company to close Main Street through downtown between midnight and 7:00am one Sunday morning. That is why this Oct 1, 2017, 5:46am shot of loading a crawler on a truck trailer has weird lighting. The combination of the max ISO on my camera, 6400, and the street lights allows us to see the hydraulic drive on the right, including the hoses that go through the frame to the crane's housing.
As an aside, I revisit the control box we saw above for the outriggers. The operator would open the lid on the front of the box to gain access to the various controls. Below is a view when the crane still had its outriggers deployed. He is ready to load his counterweight on a truck.

Below, the crane has just loaded the counterweight on the truck in front of the crane. The truck driver is moving the front pad in so that the highway width of the crane is reduced. The crane operator is done moving the rear pad in, and he is headed to the control box. 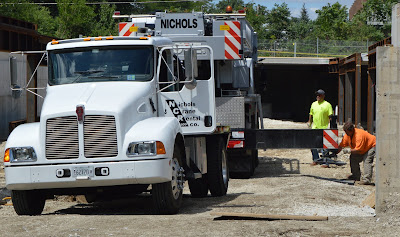 I barely caught the front outrigger moving into the truck. The truck driver is helping pick up and store the pads. 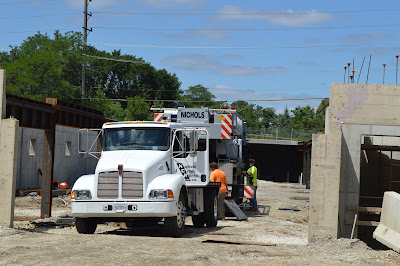 Posted by Dennis DeBruler at 8:37 PM