(Update: I'm putting this post of videos of a shoulder ballast cleaner here until I can find my notes on the cleaner. I remember already researching it because this can be used instead of an undercutter if it is done multiple times because dirt under the track washes out into the shoulder over time.)

While I was looking for something else, I noticed these photos in the same folder. They were taken at the small BNSF/CB&Q railyard in Downers Grove, IL. 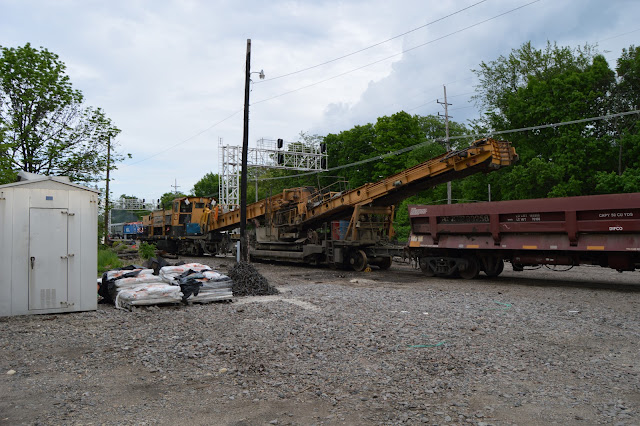 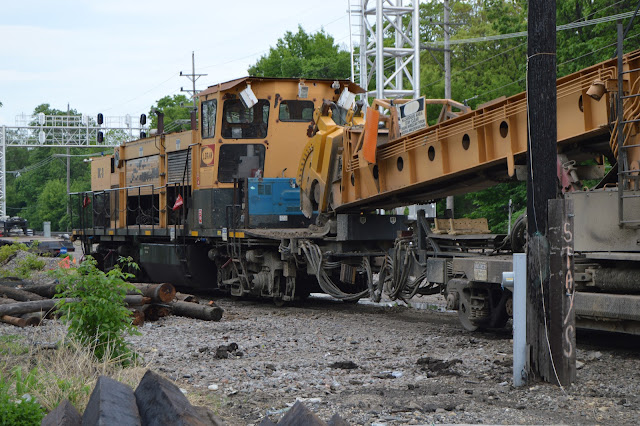 I surmised that the front conveyor swings to one side or the other and than down to dig something up and transport it to the side-dump car behind it. But what does it dig and why? Then today I came across a link to an album of 551 MoW photos. And the first sequence of photos was of this same piece of equipment.
In his photo I can clearly see it is a Loram DC-1. This gives me something to Google. And it teaches me that the DC-3 that I see on the caboose in my picture is significant. At first I thought they were model numbers. Now I think they are unit numbers.

We have already seen that one of the summer jobs for a Jordan Spreader is cleaning drainage ditches that are beside tracks. If the ditch is too deep and/or far away for the spreader, then you contract for one of these to clean the ditches. 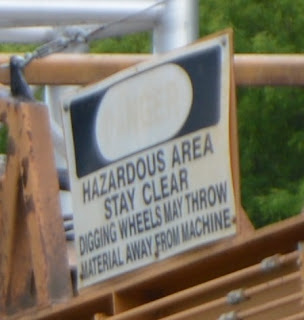 Note that the rear conveyor can also swing to the side. Most of the pictures I have looked at show that the second conveyor seldom deposits the dirt into the side-dump car. Above we see the dirt being dumped on the same side. In this Flickr photo, we see it being dumped on the opposite side. They probably use the dump car when they are cleaning a ditch close to a road crossing so that they don't dump dirt on the road (or the cars waiting at the gates).

I had noticed this sign in one of my photos. The action picture below shows that there is a rotating digger head. That explains why rocks might get thrown.
It can also be used to enlarge cuts.
(new window) Skip to 1:00


It looks like multiple people were standing on the bridge taking videos of this action. This video shows that they do shallow cuts and sometimes have to make multiple passes.
(new window)

Jim Pearson caught a couple of action shots and a transport shot of DC-2.

Posted by Dennis DeBruler at 11:24 PM