This photo reminded me that before the advent of railroads, commodities were transported on water --- rivers, Great Lakes and canals --- using sacks for gain and barrels for liquids.
Railroads quickly developed flatcars and covered flatcars, i.e. boxcars. Railroaders learned to "pour" grain into boxcars so they no longer had to pay for the labor of carrying sacks of grain. But you cannot pour liquids into a boxcar. So they continued to ship liquids with barrels.

With the discovery of oil, so much liquid (oil) needed to be shipped that the Densmore brothers got the idea of putting tanks on a flatcar because you could pour liquids into them. Vat cars continued to be used for pickles. The railroad suppliers were experienced in making wooden tanks held together with steel straps, they were called water towers and were used to refill a steam locomotive's tender. For example, Kinmundy and Centralia.


The railroad industry learned how to make metal cylinders for the boiler on a steam locomotive. So someone left the decking off a flatcar and mounted a cylinder on the car's frame. They added a dome on top to allow for expansion of the fluid and to provide a flat surface for the access hatch and safety valve.
This clearly shows that the tank was made with sections that were riveted together. Basically, they could use the same machine (plate bending rolls) and techniques that were used to make the boilers for steam locomotives. If you look carefully on the left side of the dome, you can see that it was riveted to the body with two rows of rivets.
As the length of the rollers in the machines that bend steel plate got longer, they no longer needed to rivet sections together --- they could fabricate the body as one rolled sheet. If you look near the bottom of the tank, they still had to rivet the longitudinal seam were the ends of  the rolled steel met. They also have to rivet the end caps on.
This photo shows the strength of the riveted seam because that was not the point of failure.
With the development of welded joints and thicker steel plates, the tank was strong enough that they no longer needed the center sill (frame). A switch to unibody construction also happened with other vehicles such as covered hoppers and automobiles.
Two of the photos posted by Richard Werner Jr. with the comment: "Septa Wayne Electric Car Shop
Philadelphia, PA 05-01-2017     BLT 05-1957." It is new enough to be welded, but old enough that it still has a frame.

Tank car designs evolved to be longer and offer different types of linings so that more liquid products could be shipped by tank cars. A contemporary tank car can easily carry the max weight allowed on tracks, 286,000 pounds, because the reason now for making the steel plate thicker is to prevent punctures when there is a derailment or failure when it has been setting in a fire for a while. The tank car pictured above is an intermediate safety design because it has a half-height head shield. The newest design no longer has a head shield because the end cap is made of thicker steel plate.

Because it took a while to develop the linings needed to protect steel, some products used wood tank cars long after oil had moved to metal cars.

A recent development in liquid transportation is containerization. Dennis DeBruler posted two photos with the comment:


In a westbound intermodal train on BNSF in Downers Grove, IL, on 5-29-17 I saw my first container compatible tanks.They were in the piggyback part of the train instead of the double-stack deep well part. The second tank had a placard: 1993: 131 Compound, cleaning liquid (flammable)

One can tell the containers are compatible with international shipping, 20' and 40', because they don't fill the spine car, which is designed for trailers and domestic 53' containers. 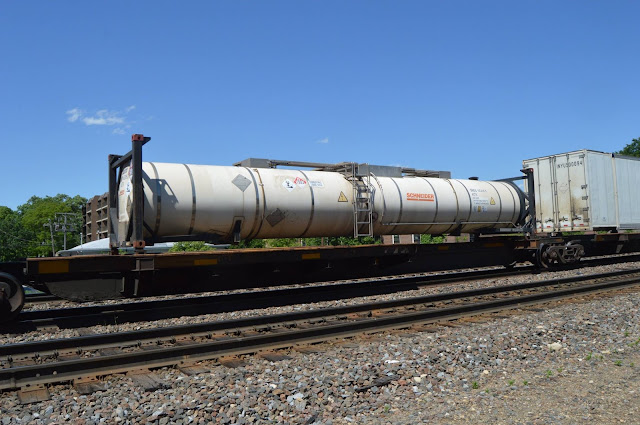 Either the lining is unique to this product or they don't want to bother to clean it for another product because the placard information is painted on. I can't figure out what that picture on the left is supposed to be telling the first responders.
Another innovation was "funnel cars." These are built with a deliberate "bend" in the bottom to help thick liquids such as corn syrup to drain out.
In this 2x closeup, you can see the middle is slightly below the sidebar. So it is a funnel car, probably carrying corn syrup.

Posted by Dennis DeBruler at 10:38 PM