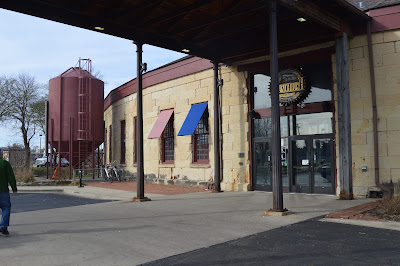 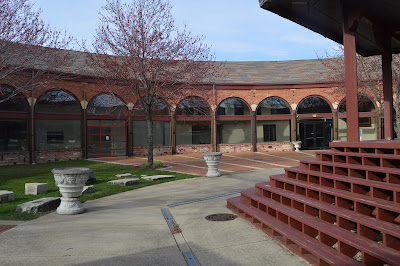 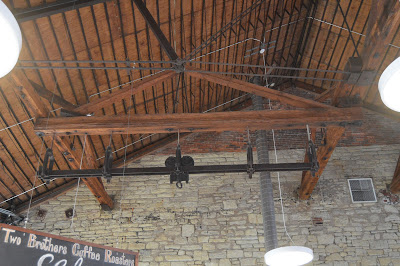 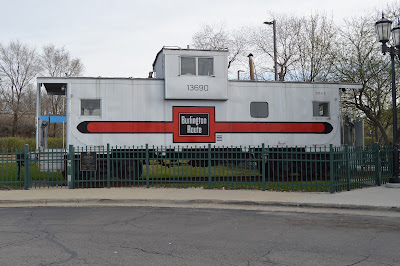 Two of the eight photos posted by Kevin Piper with the comment:

Walter Payton's Roundhouse was in a historic building converted to a restaurant in Aurora, Illinois. It was originally constructed in 1856 as a roundhouse for the old Chicago & Aurora Railroad (later the Burlington Route/ Burlington Northern), and served BN until 1974. It was abandoned and neglected until 1995 and almost demolished.
A group of investors, led by Chicago Bears football legend Walter Payton, purchased it and spent millions restoring and converting it to an entertainment complex, brewery, and restaurant. Though technically it still exists, it is no longer owned by Payton family interests. Two Brothers Brewing Company acquired the property in 2011. It is now known as the "Two Brothers Roundhouse."

The building is now the oldest existing limestone roundhouse in the United States, and once housed the official Walter Payton Museum.

Frank Smitty Schmidt created a Facebook Album with 11 photos selected from the HAER photo collection
Frank Smitty Schmidt Some of the first Pullman cars were built in the CB&Q Aurora shops. Pullman in Chicago wasn't built until 1880. From page 16 of the HAER, CB&Q shops in Aurora were building cars for George Pullman as early as 1866. First hotel car "City of New York" in 1866 and first American diner car "The Delmonico" in 1868.


A Flickr photo claims Galina, but it is really in Aurora. The background of the photo provides a glimpse of the backshops in the 1960s when they were still intact.


A 1939 view of the CB&Q shops in downtown Aurora showing the OLD full circle Rh the largest full circle limestone RH in the world and the NEW RH that is where the current parking lot is.

This complex also had some back shops. I took pictures of and in the old buildings in the 1970s. One room of the back shops had a dirt floor because that is where the heavy duty machines such as forging hammers were housed. Those machines would probably bust up concrete floors. Someday I need to look for those pictures again. There were other people taking pictures of a model in the old buildings, but they left fairly soon.


Constructed in 1856 to originally serve the Chicago and Aurora Railroad, The Chicago, Burlington, and Quincy Railroad Roundhouse and Workshop was the first limestone roundhouse in America. This roundhouse by the end of its time had close to 40 Stalls. The roundhouse was never destroyed, and was in fact added to the National register of historical places. It was bought by Walter Payton, followed by Two Brothers Brewing. Both companies used the building as a museum, restaurant, and bar. You can still visit as of today, in Aurora Illinois, as it is open as the Two Brothers Artisanal Brewing Tao House and Restaurant. Really cool to check out, especially for rail fans!

In addition to the roundhouses, CB&Q had an extensive repair facility with several backshops. Heavy industry does still exist on the north end of this property --- Fox Valley Forge Co.

Ray Speerly posted two photos with the comment: "You can see both roadhouses in these photos and part of the shops in Aurora, Ill. The building in the upper middle of the photo is the old Supt. office and where the doctor was. The shops, for the most part, looked like this till into the '70s."


Joseph Clayton posted 14 photos with the comment: "Chicago Burlington & Quincy Roundhouse in Aurora, IL. The wheel bay shop closed in 1974. BN was in the midst of tearing it down in the late 70’s. But the city had a vision that took decades to accomplish. It is a great place to visit at the end of the Metra line." 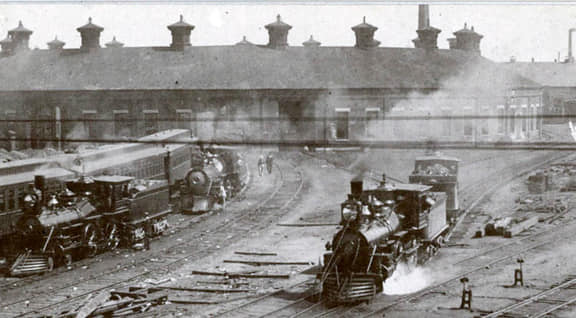 Posted by Dennis DeBruler at 7:31 PM