This blog posting was motivated by a photo by Dillon Harrison of the NKP 765 on the bridge when Metra sponsored rides on the former Rock Island route to Joliet.
He also caught the NYC Hickory Creek observation car on the bridge. One thing that struck me was how high the water was in his photo compared to the satellite image. He took his photo on June 17. My photo on June 21 is just a few days later, but the water has already receded well below the boundary in the pier between the cut-stone and the concrete.

I could see just part of the bridge by walking out onto the US-30 bridge.
Digitally zooming in on the pier in the center of the photo, it appears to be concrete on top of cut stone. That typically means that a deck truss bridge was replaced by a deck steel girder bridge. This view also shows a lower river level. 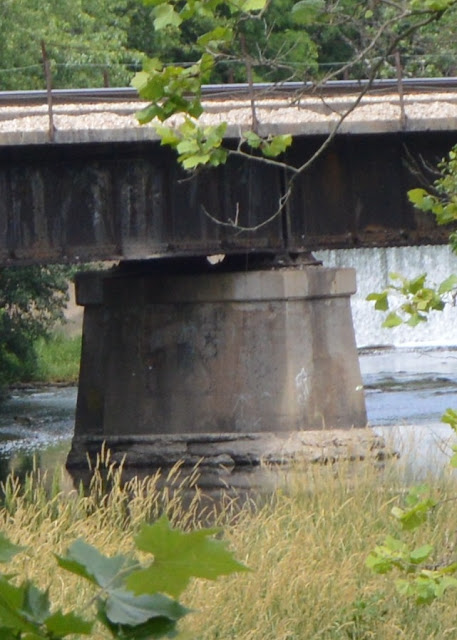 On my way back to the van, an inbound Metra commuter crossed US-30 so I grabbed a couple of shots because you need to establish if you see the engine first or last to record the direction of a commuter because they operate push-pull. 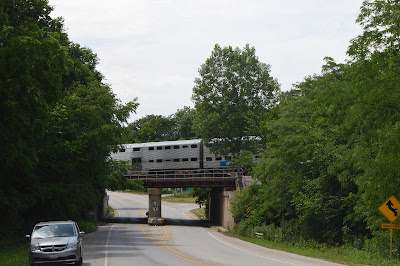 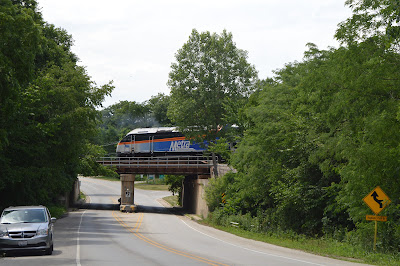 Posted by Dennis DeBruler at 11:26 PM