While taking pictures at the second I&M Canal Lock #5, I noticed a crane over at Brandon Lock. 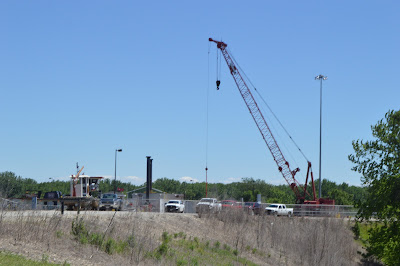 So I zoomed in. You can kinda see the pilothouse of the tug boat for Crane Barge 10 on the left, the two pillars that are used to anchor the barge and most of the Manitowoc 777 that was setting on the barge. 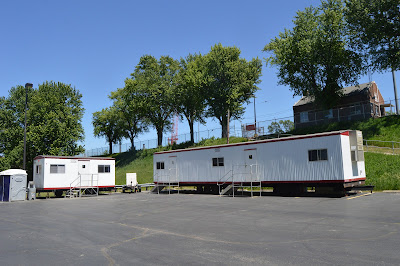 So I crossed the parking lot to go to the visitor center to check out what was happening. I noted the temporary offices because that indicates they must be planning to do some non-trivial work.

I knew there was a big red sign on the fence that said no cameras were allowed in the area by the lock, so I left the camera in the van. Thus I was not able to take pictures or video of the crane lifting a steel cylinder that was about twice as tall and twice as wide as the man standing next to it. The crane swung around and set it down on the barge. It then picked up another cylinder that I had noticed was laying on the barge. The crane lifted the new one up and swung it into position. I figured it would take a while to lower the new part in place, so I left. On my way back to the van, it occurred to me that I could play games with the rules and take pictures from outside the fence through the gate. So I grabbed the camera and trotted back up to the top of the sidewalk. To my surprise, they already had the part down in place by the time I got back. 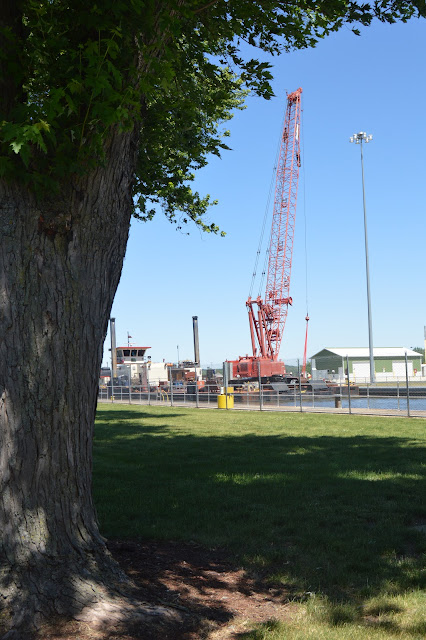 It looks like they were still unfastening the orange rigging. 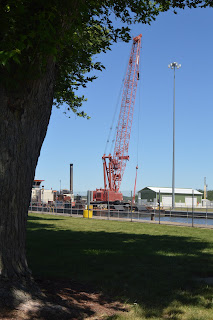 I would have preferred to get a shot that had less light pole and more tug, but to get the above shot I stood with my feet outside the fence and then leaned over to get the camera inside the fence. On the right is the shot I first took when I stood in a normal position at the gate.

And leaning over a handrail to get a shot from the other side of the tree was pretty well destroyed by the fence. 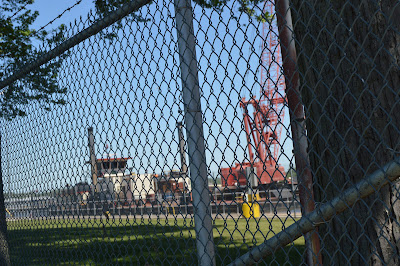 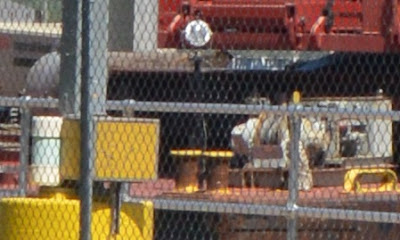 You can see the end of the cylinder they removed from the lock near the upper-left corner of this photo excerpt. Part of the top of the cylinder appears above the crawler track.
I went back the next day to see what they were doing. By the time I arrived, 3:18, the crane barge was parked off to the side of the lock.

I took the crane photo while rushing back to Brandon Road to get a picture of the recreational boat I saw entering the lock while I was driving to the parking lot. It turns out that there was already a tow in the lock. By the time there was a break in the traffic so that I could step out on the bridge to take a picture, the gate had started to close.

Update: on June 15 I did another trip to the lock to see what the crane was doing. I caught a glimpse of it while I was taking pictures of the dam. When I went into the visitor center (where it is posted that cameras and note taking are illegal), I noticed that it was parked over by the dam.
It wasn't doing anything. Not only did it never move while I was watching, I didn't see any workers on the towboat or barge.

A towboat had just left the upstream gates because I saw the gates were still closing. So I waited until a lock crew of three people walked by me. When I asked some questions, the crew member with an Army Corps of Engineer shirt stayed to answer them. First of all, the operation I saw on June 7 was the replacement of a floating tie-up. So the crane was lifting something heavy enough that the "twice the height and width of a man" cylinder would sink to its top. That cylinder had a little cylinder attached to one side of its top. That would be the tie-up.

I looked at my Dresden Lock pictures for an example of a floating tie-up. I could not find one on the opposite wall, which is strange. Since the lock was full when I visited, I could see the top of a tie-up along the near wall.
Replacing the tie-up pylon was just a quick repair job, and it did not impact the waterway traffic. The real reason the crane is at the lock is to build a bulkhead and help repair the upstream gate, which is currently not hanging straight.

Unfortunately in photo 9074 above, the pilothouse is blocking a view of the leak that I saw when I did another visit on June 21 to check the (in)action of the crane. But looking back at my picture folder, the "bad" shot I grabbed earlier while I was dodging traffic on Brandon Road does reveal the leak from the lower corner.
In the above photo 0061 we can see one of the floating tie up is Mississippi Lock #19. (Why one can take pictures of locks on the Mississippi and Ohio Rivers, but not the Illinois River, is a big mystery that continues to hurt my head.) The design of the floating tie-up is a little different because the little tie-up cylinder is next to the big cylinder rather than on top of it.

On June 21 I made another trip to the lock to see what the crane was doing. It looked like it was doing nothing. It was parked in the same place and there were no workmen in sight even though there were about 10 pickup trucks parked on the access road. The USACE person I talked to on June 15 said they would build the bulkhead and then wait for the gate repair. When I asked when the gate would be repaired, he said the had no idea because it depended on what other gate work needed to be done by the USACE. He implied it could be a long wait because their gate problem was rather minor.

On the 21st, I walked further out onto the Brandon Bridge, which takes some guts because the shoulder is rather skinny. And this bridge bounces when a big truck goes by.


The big truss structure in the background is part of the I-80 bridge across the Des Plaines River. 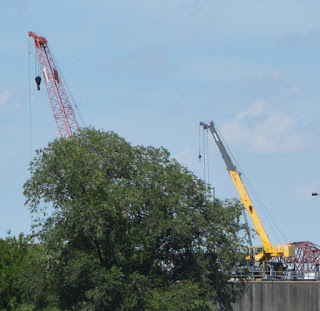 Comparing this picture to a closeup of a June 15th photo, the hieght of the big hook has changed and the telescope boom crane is setting at a different angle. So they are doing some work with this equipment, I just haven't been able to catch it. I did a couple of passes up Railroad Street trying to grab pictures in gaps between the weeds. Below are closeups from the best photo from each pass.

We can see the two cranes are probably working on different projects. If you look at the satellite photo above, the 777 is on the dam side of the point created by the dam and lock walls. The yellow crane is on the dam itself. 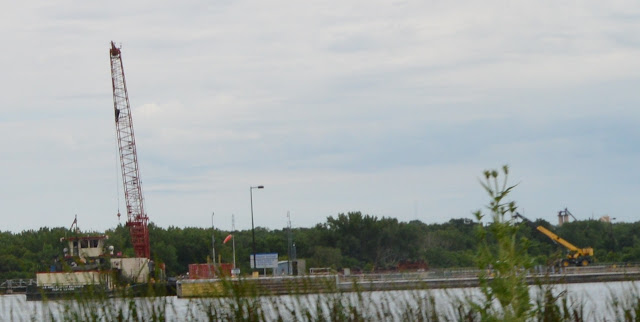 Joe Balynas' Flickr photo. Judging from the water turbulence, the lock has started emptying, but he caught it while you can still see the barges above the gate.

A couple of timelapse videos of the lock filling and emptying.
Posted by Dennis DeBruler at 7:22 AM