Lincoln Landing is along the old canal bank (when the canal was 120' wide in Lockport) between 9th Street (IL-7) and the Gaylord Building. There was a big enough gap in the traffic that I was able to grab a view across 9th Street (51 photos).

A medallion reads "While serving in the State Legislature, Abraham Lincoln voted in support of the I&M Canal. Having traveled by several modes of transport, he understood the value of the proposed canal to Illinois and the entire nation." It shows him riding on a horse.

This photo of the middle bay along the landing shows that there are signs on both sides of the bay. 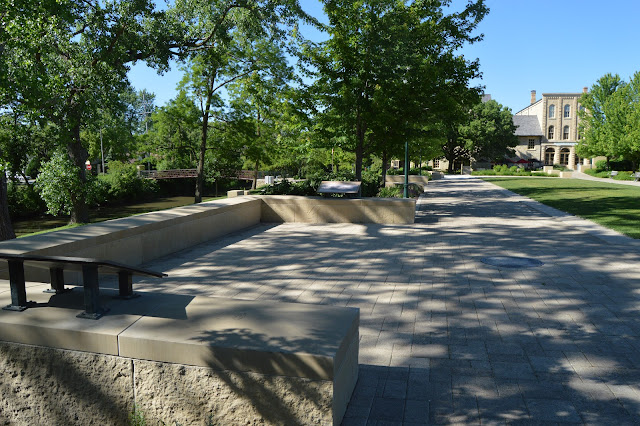 During the American Civil War (1861-1865), the tonnage of materials moved on the I&M Canal was the highest to date. Hiram Norton was at the center of the activity in Lockport. His building dominated the South Public Landing, much in the wway he held sway in the community. The massive three-and-a-half story limestone grain elevator is still one of the largest structures on the canal. Norton profited because he took advantage of the canal's potential, harnessed its water power, and diversified his business operations. In addition to the grain elevator, Norton built a flour mill, a paper mill, and other facilities across the canal on the hydraulic basin. For 75 years, Norton & Co. was a premiere enterprise along the I&M Canal and a solid fixture in the Lockport community.

The sign also has this illustration of the Norton Building.

But now I'm left with the question: where was the hydraulic basin?

The Canal Commisioners chose Lockport as the site for their headquarters and designated this area as the "Public Landing" for the loading and offloading of boats.They also constructed an office building that still stands above the North Public Landing. Several businesses operated along the I&M Canal, such as George Gaylord's warehouse and store located to the north. Lockport gained a repuation as an exporter of local limestone and grain, while machinery, lumber, and other goods were transported to the region. Competition increased when the Chicago, Alton & St. Louis Railroad was built right along Commerce Street to the east. The ability of move goods quickly and inexpensively made Lockport's business district prosper and the community thrive. 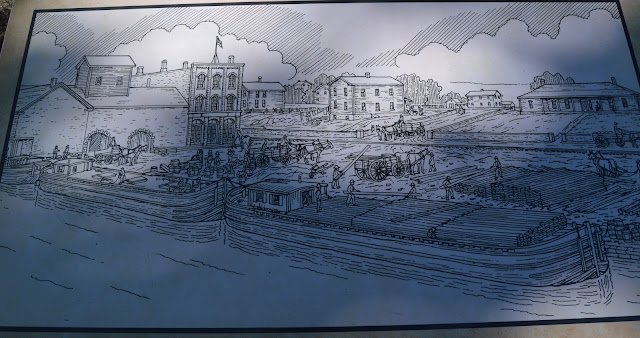 A view looking back towards 9th Street. 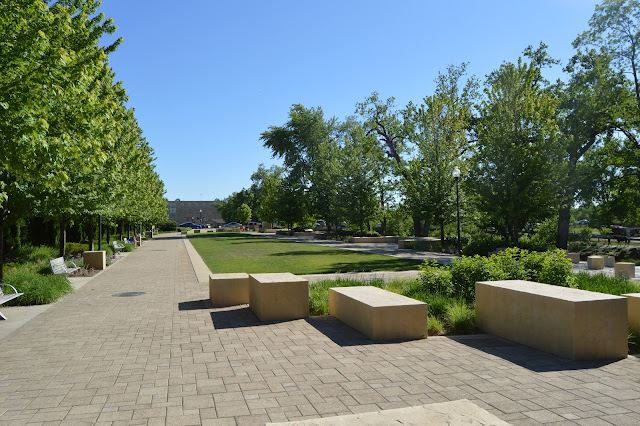 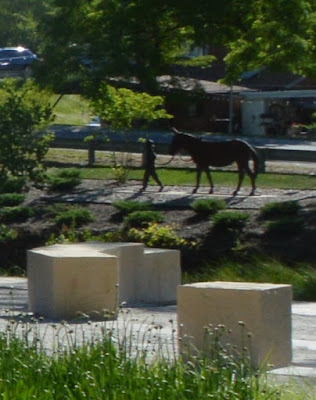 This is a closeup of the right-middle part showing a statue of a muleboy leading a mule. It is on the other side of the canal. 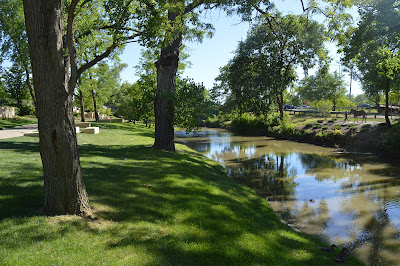 When I got back down to the current canal bank to walk back under the 9th Street bridge to get back to my van is when I first noticed that statue. (That is, I didn't notice it in the above picture until I uploaded it to the computer.) 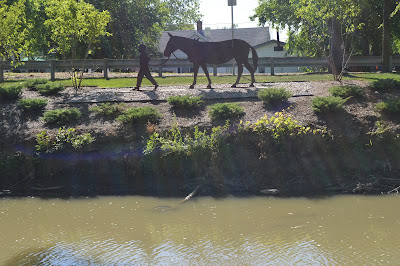 So when I was across the canal from it, I took a closer shot. It is interesting that the canal bank is vertical here, but doesn't seem to be reinforced with a stone embankment. They must be able to keep most storm water out of the canal to avoid erosion.


Posted by Dennis DeBruler at 4:04 PM