First of all, I've learned that all of the bulk transport boats on the Great Lakes are now self-unloaders. If they were not built that way, they were converted. The grain elevators of Buffalo, NY show examples of self-unloading boats including a photo essay by Brian R. Wroblewski. Note that some of the pictures of the grain elevators show the old-fashioned unloaders that are still on the side of the elevators. Bill Kloss has a photo of an iron-ore boat unloading. Again, self-unloading made the scoop-by-scoop Hulett unloaders obsolete.

But waterway barges are too small and flat to justify the installation of self-unloading equipment. Many companies, such as A Block Marketing, use an excavator. (This company supplies various kinds of dirt to landscapers that is receives via barges.)
Here we see that the excavator can do double duty because it can also remove and replace the covers. 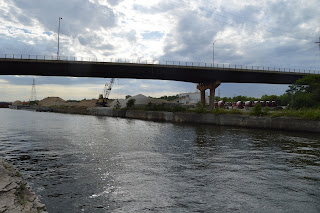 The cement plant that is on the next site downstream along the canal has acquired an old crane that uses a clamshell. Note the cab is built on top of the crane's house rather than being part of it so that it is easier to look down inside the barge. 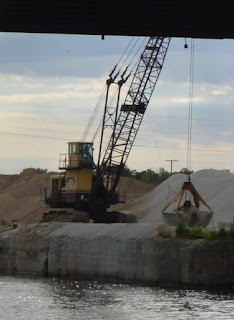 But the cement company also has an excavator. I see it also has a raised cab.

The Will County Generating Plant had two gantries along the canal to unload coal from barges. This link has photos of the north gantry.

While I was taking pictures of the BRC RR Bridge from the Pulaski Road Bridge, I noticed there was a lot of material handling piles on the south side of the Chicago Sanitary and Ship Canal.

When I went further south on the bridge to get photos of the BNSF/Santa Fe Nerska Yard, I also grabbed a view of the material yards. 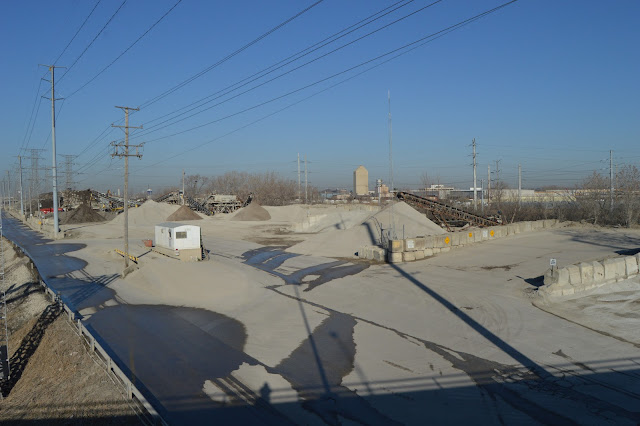 Later I had switched to my telephoto lens (55-200) and took several shots of a northbound freight on the BRC Bridge. Fortunately for this post, some of them included the unloading operation for one of those material yards. Once again, we can see that the cab is mounted high on the excavator's house. It must be setting on a flat barge that lets it unload four material barges without any assistance from a towboat.

But excavators, clamshells, and coal unloading gantries suffer the inefficiency of removing the material scoop-by-scoop. And no matter how big the scoop is, you have the problem of how do you get the last little bit out? Do you lower a skid steer into the barge? A power broom? Or, if the next load is the same material, do you just leave the bottom stuff and reduce the capacity of the barge a little bit? Scoop-by-scoop is slow and cleanup is labor intensive.

Material handling train cars have also been developed so that the contents of the train can be dumped using a boom at the end to avoid scoop-by-scoop unloading.

The Des Plaines River widens on the south end of Joliet because the river bluff curves west. While I was on the McDonough Street Bridge, I took three photos to capture the scene from east to west. 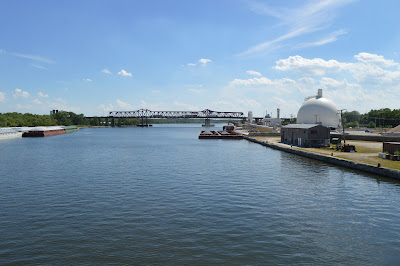 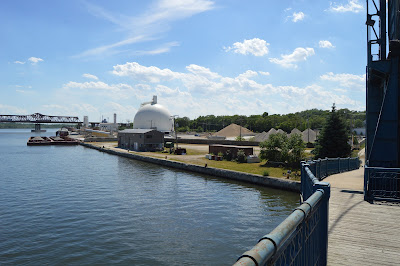 Note there are 11 loaded barges parked on the east side of the river. I noticed there was movement and dust at the unloader, but the movement was subtle. It was not scoop-by-scoop unloading. So I zoomed in optically on Ozinga Material & Logistics. 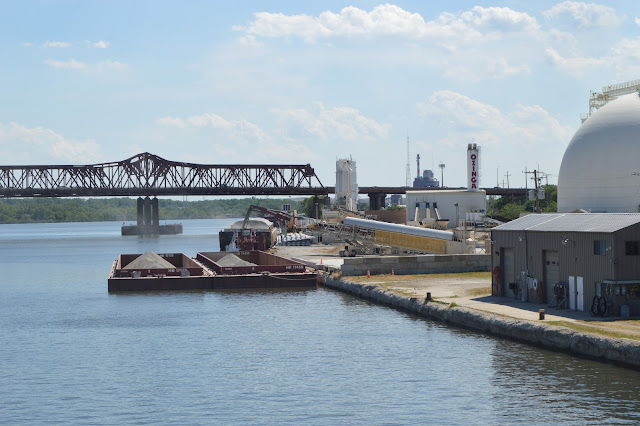 Now I zoom in digitally. 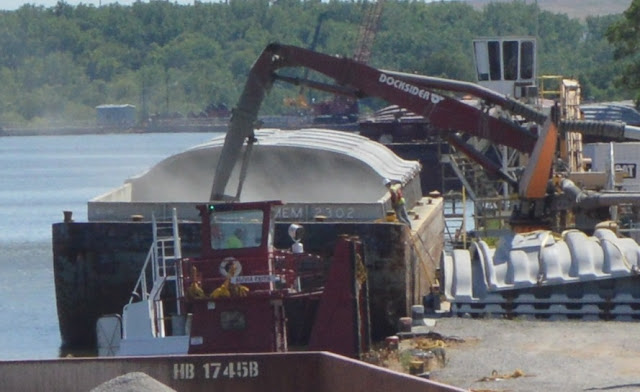 I took a couple of more photos to catch that the arm was going back and forth across the width of the barge. I include just the digitally zoomed versions here. 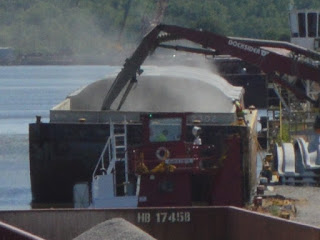 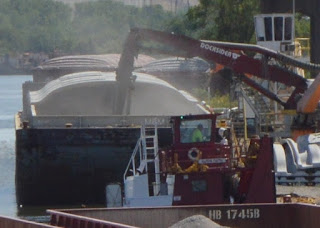 I could see that big hose along the top of the boom with my naked eye. So I had already concluded that they were using vacuum to suck out the material. The boom goes back and forth and lower while the little dedicated towboat shoves the barge past the unloader.

Now that I can read the brand Docksider, my theory of vacuum unloading is confirmed. Evidently they are unloading cement into that large spherical tank. Ozinga has several concrete mixing plants upstream that this facility probably supplies. I have already posted a picture of the plant along Lumber Street.

Ozinga's entry gate is across from the dockside equipment so this street view allows us to see more of the unloading machinery.

And I got my own photo on a later trip:
In the above photo, note the skid steer on the left. They are lowered into the barge to shove the payload into big piles that will fill the excavators next "scoop full." Judging from the high bridge in the background, this photos was taken at their Lemont mixing plant. Most of the Ozinga trucks that service Downers Grove come from this plant. A few come from the Naperville plant.
Google found a video that lets us see scenes of the pipe being moved in the material to suck it out.


I went back and looked at the pictures I took from this bridge the week before. An overview shows there is a set of barges parked on the east side of the river and a barge at the unloader. I learned later that the barges on the left are a fleeting operation by Illinois Marine Terminal.


Here is a closer look from the west side of the bridge. 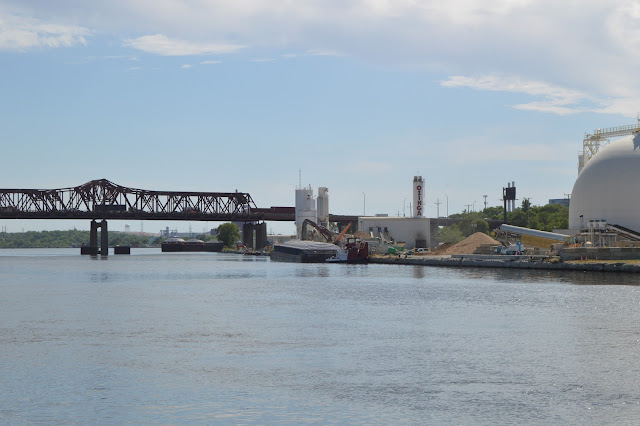 And a digital zoom in on the unloading. You can see the far end of the barge go up as they remove the load at that end.

And here is what it looked like when I first took pictures of McDonough Street Bridge. The yellow thing with wheels on the end is probably used to load barges. I assume it has a conveyor belt that telescopes out of that housing. It looks like they are going to unload aggregate instead of cement and that would be why an excavator is dockside. The video confirms that the vacuum unloader can be used only for fine materials like cement, pebble lime, limestone, gypsum, fly ash, soda ash, alumina, pet coke, and slag.


I zoomed in on the unloader we saw above near the BRC RR Bridge to see if it had a vacuum hose. It doesn't. But it does have a lot of hydraulic circuits on the stick going down to the attachment. The attachment at the end must be more sophisticated than a standard excavator bucket. Even though it looks like there is someone in the cab, I took about a dozen pictures of a train that included this unloader, and it never moved. So it remains a mystery as to what the attachment looks like. 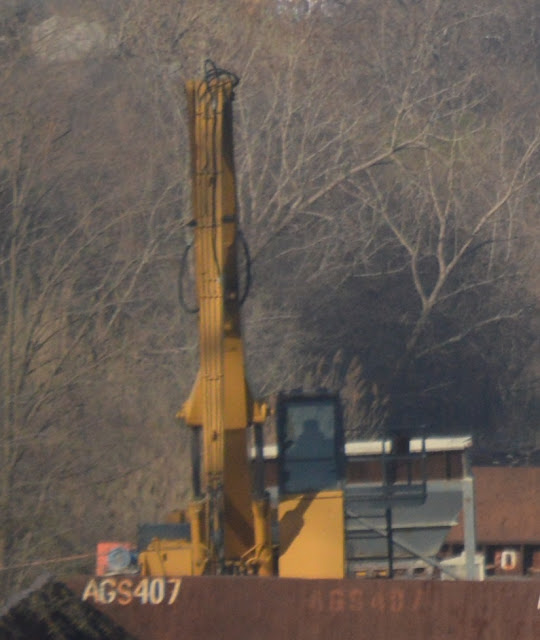 Update: some ships are still unloaded scoop-by-scoop. They not only have a skid loader as a helper, I also note an excavator is already in the hold. I think the comment is wrong. They talk as they are loading the ship. Instead, they are unloading and the equipment is getting stuff out of the sides that the scoop can't reach.


I assume this is lifting the grain with an augur instead of vacuum.


Continuous coal unloaders. This video says the vertical lift is done with a "screw conveyor;" that is, an augur. So that indicates my assumption about the NEUERO unloader is probably correct.

Posted by Dennis DeBruler at 11:22 PM