(Bridge Hunter, no Historic Bridges, (Once again, the Google satellite image was broke.) Satellite (I normally turn off the labels on Bing satellite images, but I left them on to show the leg through the tunnel.))

The route through the tunnel exists on my 1928 RR Atlas. It was Western Pacific's mainline between California and Salt Lake City. I had to dig out my 1973 RR Atlas to find the route to the north and the junction labeled Keddie Wye. The northern branch was shared with BN and ran through Westwood and Lookout to Klamath Falls, OR.


What a Difference the Lighting Makes
Roger Puta took these two Keddie Wye photos in March 1983. All the units are SD40-2s. Really nice photos but strikingly different.

(These photo were supposed to be higher in these notes. But a Google bug put it here. Instead of wasting my time working around a bug that I reported weeks ago, I leave the photo here as a monument to Google's bug.)
Phil Williams posted two photos with the comment:

Out of all the Great Railroad bridges we have here in Northern California to me there is one that beats them all when it comes to fascinating and being unique. Famous amongst Railfans across the Country and a must see is the one and only Keddie wye! Built by the Western Pacific for their new line that was heading north the Keddie wye connected WP's new 4th sub to their Feather River Route by connecting both lines on a bridge that crosses Spanish creek. The line to the left is now owned by the BNSF and is their Gateway sub. To the right is the UP's Canyon sub. heading towards Portola. 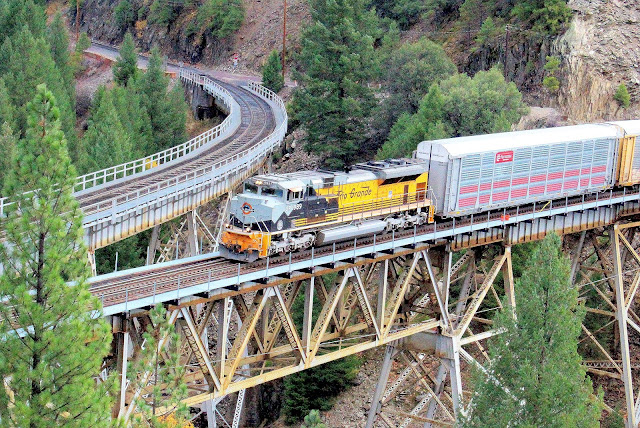 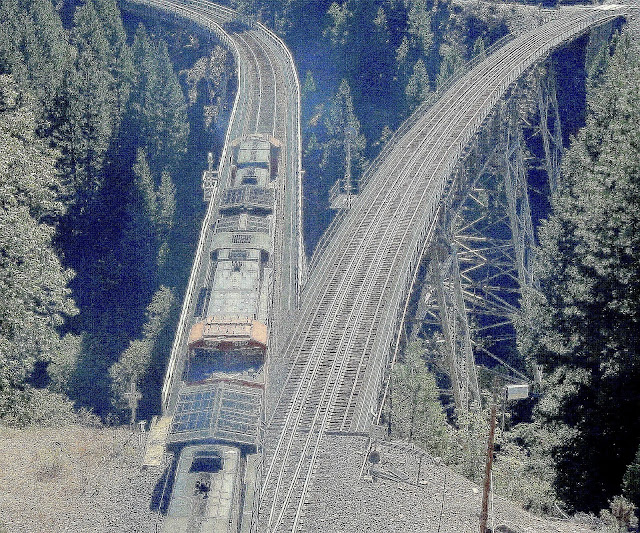 Posted by Dennis DeBruler at 12:26 PM