The Norton Building was a warehouse. It also boarded mule drivers. Before grain elevators were invented, it warehoused grain in sacks like another remaining canal-side structure did in Seneca. But the Seneca structure specialized in grain warehousing; so after the invention of the elevator, it was converted to a grain elevator. As a general purpose warehouse, Norton must have lost the grain business.

I had a meeting in Lockport during rush hour. So I went early to avoid the rush hour and spent the time taking pictures. While I was down by the Metra station, I noticed a big building made with cut stone. I recognized it as the backside of a famous building along the I&M Canal. This view is looking northwest across the Metra+UP/GM&O tracks. 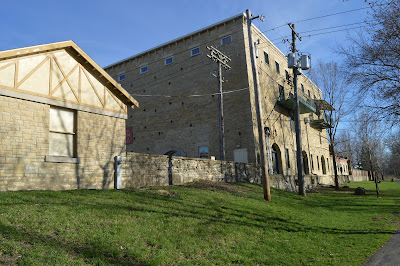 I then walked around the building and took this canal side view looking southeast. The building on the left is a modern building that houses public restrooms. I can't figure out why it seems to lean to the right while the Norton building seems to lean a different direction. This must be a weird variant of the keystone effect. 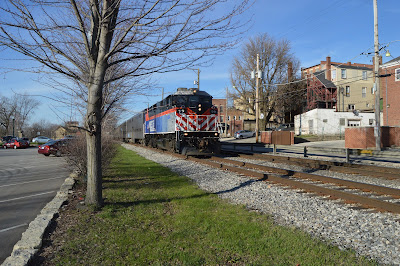 I then heard the horn of a train so I hustled back across the parking lot that is north of the Norton building and caught this picture of outbound #99, which is one of the three locomotives bought from MARC, which were bought from GO Transit. It sports the new livery that will be applied to all rebuilds.

On the left, past the parking lot, we see a glimpse of the Gaylord Building. To the right of the locomotive we see buildings along the north side of 9th Street (IL-7) and the backs of buildings on the west side of State Street (IL-171). 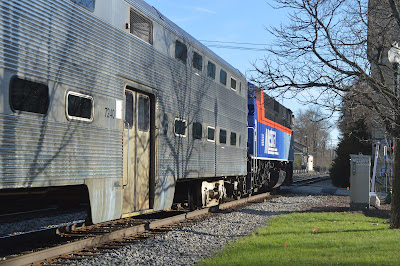 After the commuter train rolled past me, I resumed taking pictures of the Norton Building. 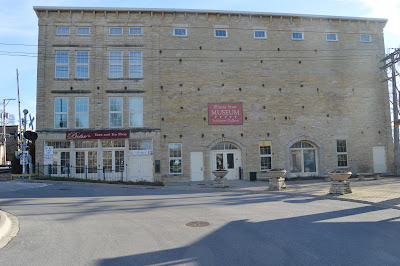 The north side of the building. (The street grid in downtown Lockport is based off the I&M Canal, not the Compass grid, so when I say north, I really mean a few degrees to the east of North. Likewise, the other directions are really rotated a few degrees clockwise.) 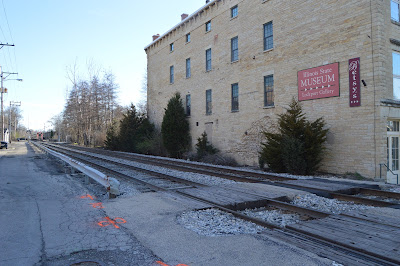 The east side of the building catching the tracks that go by it and the commuter train stopped at its station. 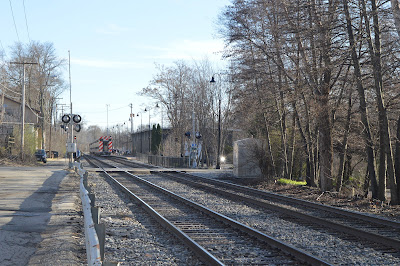 As I walked south along the tracks to get the following photo, I grabbed a closer shot of the commuter still discharging passengers at the station. 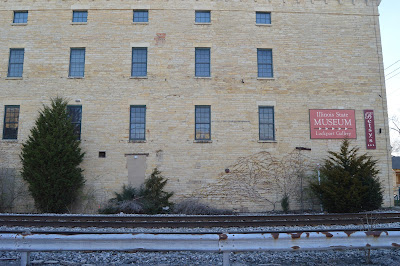 The east side of the building.
I knew the canal was 120' wide by the Norton Building and all of these trees would not have existed because the area between the building on the left and  the embankment on the far right would have been under water. So I revisited this building to better document the canal side of the building as part of my field trip to see Lock #5. 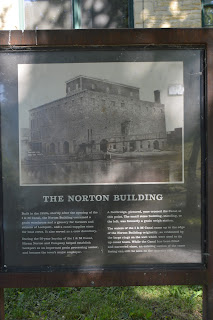 There is an interpretive sign along the trail by the building. The text is:


THE NORTON BUILDING
Built in the 1850s, shortly after the opening of the I & M Canal, the Norton Building contained a grain warehouse and a grocery for farmers and citizens of Lockport, and a canal supplies store for boat crews, It also served as a crew dormitory. [The smaller building on the roof.]
During the 50-year heyday of the I & M Canal, Hiram Norton and Company helped establish Lockport as an important grain processing center, and became the town's major employer.
A footbridge, pictured, once crossed the Canal at this point. The small stone building, standing to the left, was formerly a grain weight station.
The waters of the I & M Canal came up to the edge of the Norton Building originally, as evidenced by the large rings on the wall which were used to tie up canal boats. While the Canal has been filled and narrowed since, an existing section of the stone facing can still be seen on the opposite side. 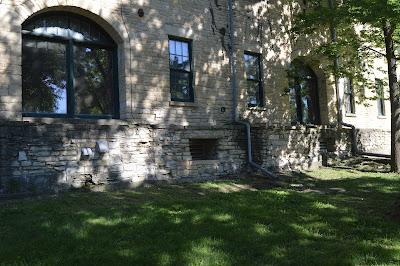 The water level came all way up to the top of the "gray stone" and the base of what used to be freight doors. One of the tie-up iron rings still exists to the left of the downspout. The rings allowed the canal boats to be fastened by a freight door while it was being unloaded and loaded. 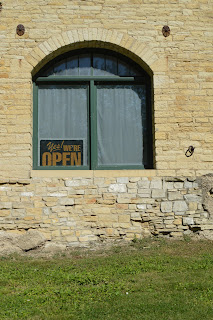 I took a closeup of the third freight door because it was not in the shadows of trees. Again, note the poor quality stone on the foundation wall that was expected to be unseen because it would be covered with water. We see another tie-up ring. We also see two rod anchor plates above each window edge, 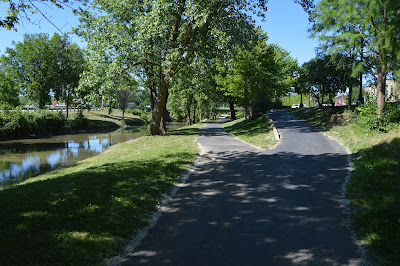 This is the view upsteam taken from beside the Norton Building. Again, none of the trees along the current canal bank would have existed because the trail would have been under water. The ADA ramp is built on the original canal embankment. 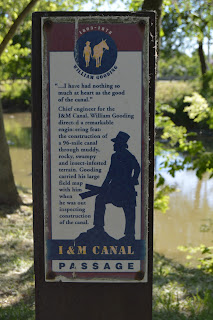 The picture below was taken south of 9th Street. On the right is the interpretive sign that is next to the sculpture. It reads:


"...I have had nothing so much at heart as the good of the canal."
Chief engineer for the I&M Canal, William Gooding directed a remarkable enginering feat: the constuction of a 96-mile canal through muddy, rocky, swampy and insect-infested terrain. Gooding carried his large field map with him when he was out inpsecting construction of the canal. 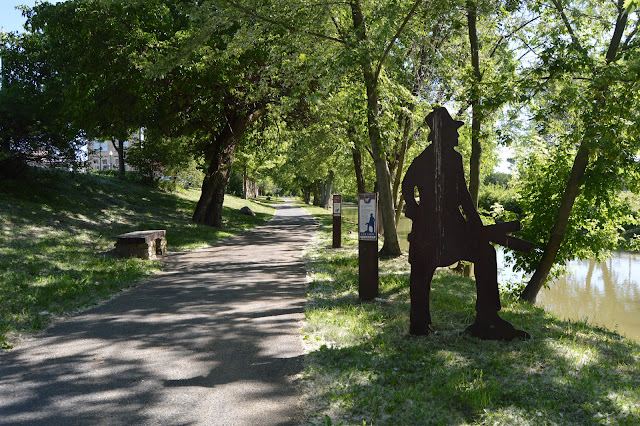 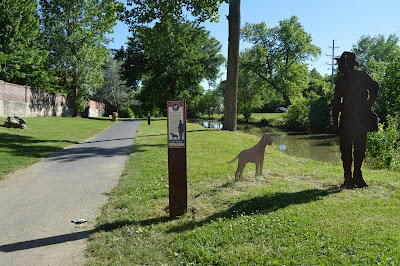 Edward Retz came to the United States from Europe with $4.50 in his pocket. His first job was as a mule driver on the I&M Canal. For ten or more hours each day, he drove a team of mules along the towpath as they pulled the 150-ton canal boats. The most famous mule driver on the canal later became known as "Wild Bill" Hickok, the well-known lawman.

Even the sign on the public bathroom building reflects a respect for the history of the area. 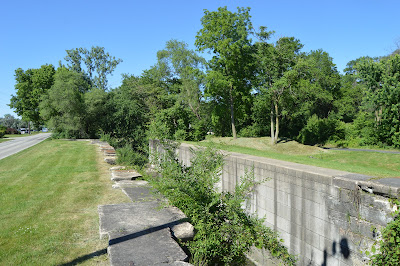 I went back to Lock #1, which is at the southern end of the 120' foot wide part through Lockport. All of the trees past the end of the lock and to the right of the towpath embankment would not have existed because that area would have been under water. I don't like the photos I got around Lock #1, so this picture is basically a placeholder until I make another trip to try to find some better angles of the canal upstream of Lock #1.
Joe Balynas took a photo in 2008 from a comparable angle. But since I was taking pictures in the Summer, the leaves on the trees totally blocked this view. So I walked downstream. It appears they deliberately skipped planting some trees on the west bank across from the building so that you could get at least a partial view of the building. Again, the trail and these trees would have been under water when the canal was operational. 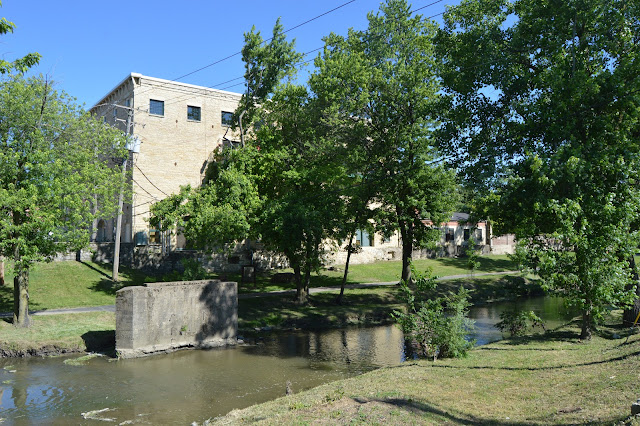 On my way back from the west bank, I almost caught a gap in the traffic on 9th Street and grabbed this picture of Lincoln Landing and the Gaylord Building in the background. As shown in a picture above, the trail goes under the bridge so I went back down to use that trail to get to the next segment north on the canal. But that segment is a post for another day.

Update: When the deep-cut was finished in 1871, the original plan of using hydropower in Lockport was implemented. A hydraulic basin and several businesses were built between the upper-pool of Lock #1 and the Des Plaines River to exploit the unlimited supply of water from Lake Michigan and the 19.35' head between the canal and the river. My understanding is that Norton owned these businesses.
In 1842, Norton had built the largest grain warehouse on the Chicago River. "Norton was very interested in shipping grain from Chicago to the East. In 1842 Gov. John Davis of Massachusetts was investigating, at the request of English and Eastern bankers, the feasibility of loaning additional money for the completion of the canal. He consulted with Norton on the profitability of grain shipments by water. Norton, he acknowledged in his report, knew a great deal about the grain market.4 In 1848 the canal was completed, and Norton opened a grain warehouse on the canal in Lockport. The locally quarried stone structure could hold 200,000 bushels of grain. Lifting was powered by steam. It was located near where the grain was produced, so farmers could bring their wheat or corn in wagons, have it weighed, then dump it into a hopper in the basement, from whence it was carried to the head house at the 286 top of the building. This wood frame structure was seventeen feet tall and of substantial dimensions. It contained the steam-powered machinery, as well as the device used to shift the grain down to the designated bins for storage." [ulewisu-49]
Posted by Dennis DeBruler at 8:59 PM