Note "#5" is plural. There were three #5 dams on the I&M Canal. This one is the existing remnant down by the Brandon Dam. Before the Brandon Dam and Lock was built as part of the Illinois Waterway project in the 1930s, Lock #5 was part of Dam 1 in the middle of Joliet. There was also a guard lock just upstream of Dam 2 where the I&M Canal resumed.

Please read Joe's comment on his Flickr photo of where the guard lock used to be. His comment provides more details about the two dams and how the towpath was routed along the Des Plaines River. My picture to the right is at about the same location as Joe's picture. You can see that Joliet has done a good job of turning its riverfront into an asset. This is part of a park between Western Ave/Cass Street and Jefferson Street on the west side of the river.

BNSF/Santa Fe has a skewed bridge over the I&M Canal where it joins the Des Plaines River.

When Joe mentioned that the replacement Lock #5 was built down by the Brandon Lock, I checked a satellite image. It still exists. It looks like it still has its old miter gate. But we will see in the last photo below that they built the concrete wall in the shape of a miter gate.

Given that this lock was built as part of the new waterway that opened on March 1, 1933 and that the canal was closed in 1933, this new lock must have been completed just in time to not be used! In fact, "the last commercial boat to make the trip from Peru to Lockport was the 'Niagara' in October 1914."
[JOLIET Transportation & Industry A PICTORIAL HISTORY by Robert E. Sterling, p14] So the government stupidity of building something that is not needed is not a recent development. 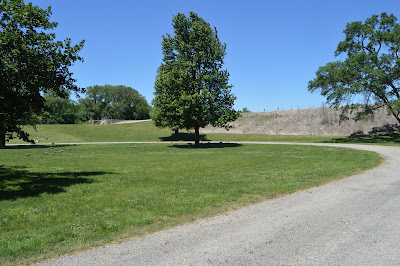 This is an overview looking northwest from past the end of the parking lot. You can see the top of Lock #5 to the left of the middle trees. The grey "hill" is a levee between Lock #5 and Brandon Lock, which is out of frame on the right. 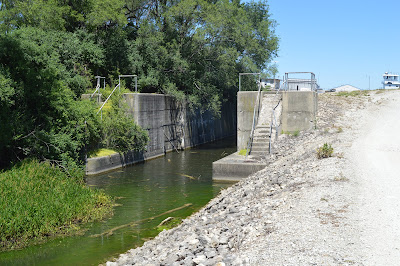 I climbed the grass berm on the left in the above photo to get a view of the downstream side of the lock. 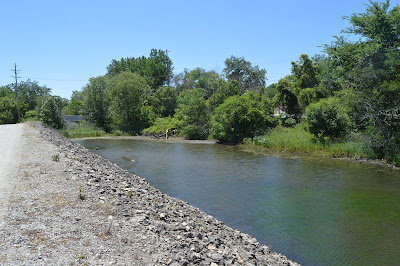 I then turned to record the downstream view. There was a big gaggle (flock of geese) grazing on the grass next to the parking lot. The canal gives them a nice basin of water. 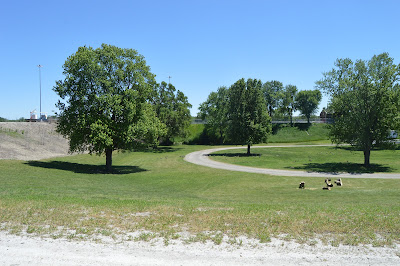 Turning some more, you can see part of the gaggle on the grass, the levee I mentioned on the left, and the grass covered side of Brandon Lock. Part of the brick office building is peaking out behind the tree on the right. 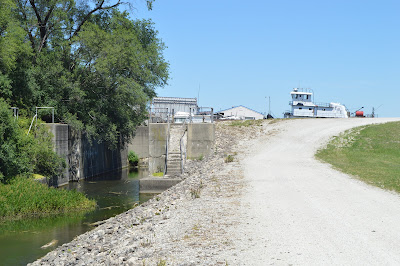 I walked further downstream to try to see more of the inside of the lock. 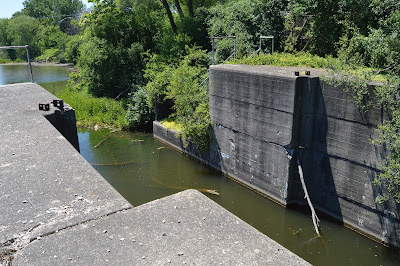 Then I got brave and went up on the side of the lock. You can see the notches for the downstream gates. 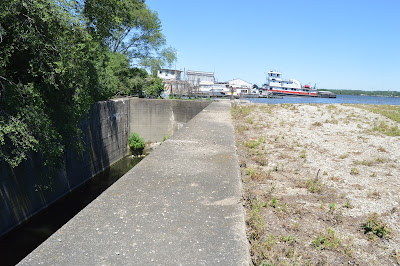 Looking upstream is when I realized that the lock has been plugged with a concrete wall made in a V-shape that looks like miter gates in satellite images. 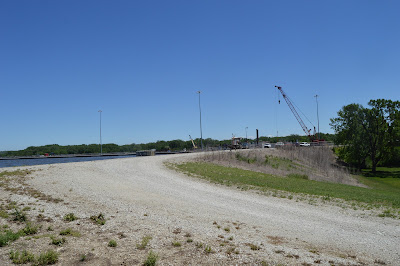 Turning to look towards Brandon Lock we see an access road on top of that "gray levee" I pointed out before. The river impounded behind the dam is on the left. The crane is on a barge in the lock.


The next day, when I went back to check out the crane action, the gaggle was down by the beginning of the parking lot. The grass embankment in the background is the edge of the I&M Canal from which I took the first pictures of the lock.

The width of an Illinois Waterway lock, 110', is the same as the length of an I&M Canal lock.

Update: a sign in front of the Canal Headquarters Building indicated the canal quit operating in 1914. So It is even more baffling as to why they built a replacement Lock #5.
Posted by Dennis DeBruler at 10:13 PM