(Satellite) There are other views of the powerhouse and dam in the background of photos of the lock.

Between Keokuk, Iowa, and Hamilton, IL, is Mississippi Lock and Dam #19. It also has a powerhouse. In fact, the powerhouse is why it was originally built, and this dam existed a few decades before the other dams were added to the Mississippi to improve navigation.

This dam is about a mile long, and it is rather hard to get a picture of the whole thing. It was the second longest dam in the world when it was built, and it is still the longest dam on the Mississippi river. But, by an historical marker park on the Illinois side, someone has cut the trees so that you can see most of the dam and powerhouse. (Unlike most river powerhouses, this one is perpendicular to the dam rather than part of the dam. That is, it is parallel to the shore.)

The organizers of the effort to build the plant searched for years before they found someone willing to attempt the project---Hugh L. Cooper, the engineer who had supervised the construction of the Niagara Falls plant. Since the customers they secured contracts with before they started construction were in St. Louis, the project was also the first to use high-voltage transformers and transmission towers. The Army Corps of Engineers received the lock for the 6-foot (9-foot?) navigation project as a condition of the original construction permit.

When the powerhouse was built during 1910-13, the $25 million project was the largest privately funded construction project in the world. People came from all around the world to witness the construction and the town became known internationally.
It was the second largest dam, the largest monolithic concrete dam, the largest hydroelectric power plant with the largest cast iron turbines. (I'm still trying to determine if the largest hydroelectric power plant would also have been the largest power plant.) For comparison, the 1885 Niagara Power Station had 10 AC generators, each rated at 5,000 horsepower (3,700 kw) or 50,000 horsepower. The Keokuk Power Station was rated at 250,000 horsepower and 142MW. Each unit can do 10MW, but there must be switching equipment limitations that limit the plants capacity to 142 instead of 15*10=150.

But when the plant was opened for the 100th anniversary tour, a sign shows 150,000 horsepower and 150MW. The sign is obviously wrong because the horsepower should be more than the KW.

HydroWorld[1] has summarized the "firsts" for hydroelectricity:

Another notable feature of the plant - the generator rotor, turbine and shaft assemblies - may be the largest ever built. A single bearing that was four times larger than anything built previously supports each assembly. Engineers were uncertain a scale-up of the roller bearing would be adequate to provide the desired service life for the system. Only half of the turbines were installed with roller bearings. The others were installed using a new type of bearing that had just been invented by Kingsbury Thrust Bearings. These new bearings were so effective that they replaced all of the roller bearings at the plant within the following decade. After a century of virtually continuous operation, none has needed more than minimal repair.
[1]

Between Nauvoo, IL, and Keokuk, Iowa, was the Des Moines rapids. The 11-mile stretch of river that falls 22 feet (28 feet in a different source) was the first major obstruction to travel on the Mississippi river. This drop in elevation provides much of the 38 foot head (distance between upper and lower pools of water) for the power station. See a St. Louis Post-Dispatch article for a photo by David Carson of one of the cast iron Francis water wheels that has been retired. (Starting in 2001 the turbines are being replaced with more efficient stainless steel turbines.[1]) This turbine was designed to use a small head but with a high flow rate as opposed to the type of turbine that is used in, say, the Hoover Dam. That article also has a picture of the 15 generators. (Use the arrow in the upper-right corner of the photo to access the other photos.)

Comparing David's photo in the Post-Dispatch article of the generator room with an historical photo shows that most of the manual controls are still in place, but they are no longer used. All of the electrical components of the plant have been replaced, but most of the mechanical and civil-engineering components are of the original design, if not fabrication.

The electrical changes include switching from 25 Hertz power to 60 Hertz and using computer-based controls. But much of the 110,000 volt transmission equipment that was developed for this project is still in use[1]. The highest voltage used by the Niagara project was 20kV.

The current use of the hydro power is as a peaking plant because a generating unit can be brought on line in a matter of minutes. Basically, open a gate and sync it to the grid. This allows the plant to be used when one of Ameren Missouri's baseline nuclear or fossil fuel plants has an unexpected outage or during "peak" periods of electrical demands.


Every arch in the dam had a spillway sluice gate. It has been rainy enough this summer that some of the gates are open. A close up indicates that they have several gates open a little bit.

Other photos I have seen of the dam seem to use just a few gates that are opened wider.

I wonder if they opened the gates wider than normal to get a publicity shot for their 100th anniversary of operation. Many of the photos don't have any gates open at all because the locking operations and powerhouse can handle the river's flow. In fact, each day the Army Corps of Engineers notifies Ameren Missouri how many of the 15 turbines that they can run that day.

I learned that the Iowa side has the wrong angle to see the gates at the top of the spillway. The next time I go, I'm going to have to explore the Montebello State Park because it has a better view of the dam's arches. But it is still hard to see the gate itself. And then I found a closeup of a single arch in the Google image collection.


I think the flow in this case is just leakage. The dam is 29 feet wide at the top, 42 feet wide at the bottom, 53 feet high, and 4460 feet long. The spillways are 32 feet high. There are 119 piers. Originally just the piers and arch were built to create a bridge. This minimized the pressure on the next cofferdam for the next pier. Then the spillways were added under the arches 5 feet at a time. 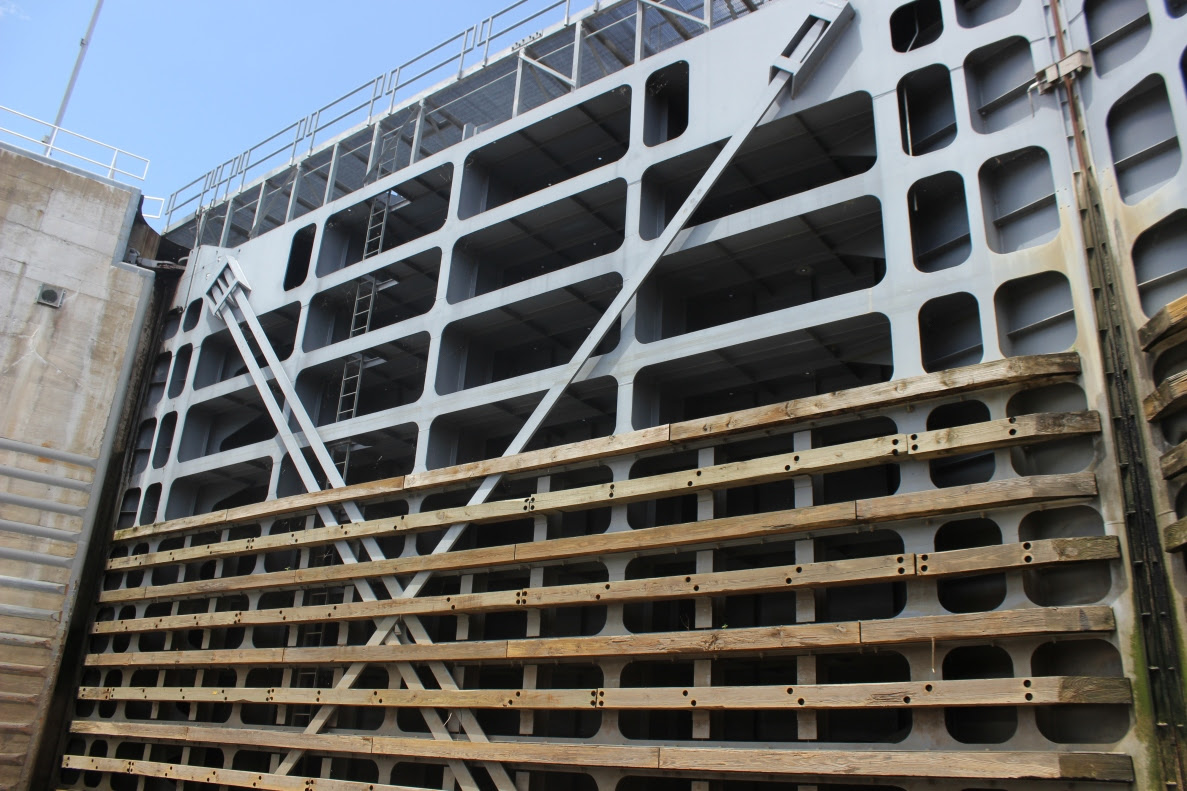 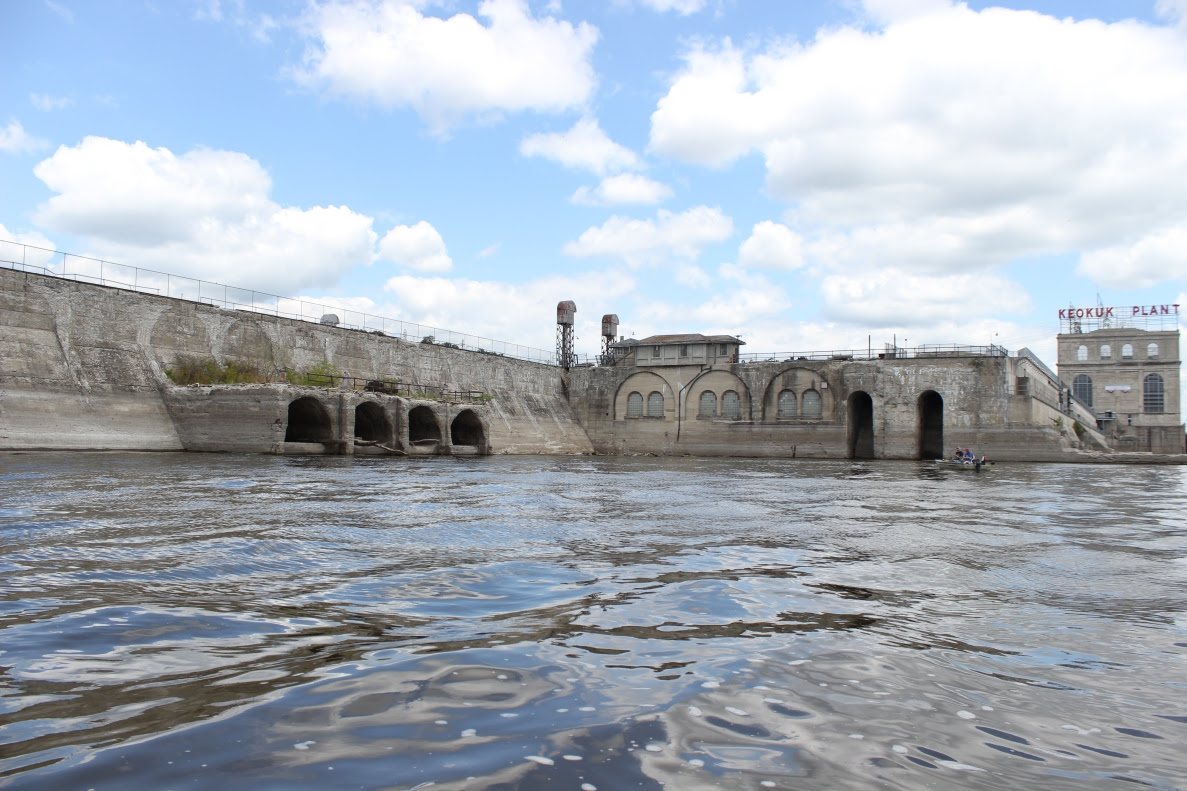 Impacts of the raised water level

Raising the level of the Mississippi River to create a 60-mile-long lake posed problems along the Iowa shoreline. The company wound up buying out almost half of three towns and moving the residents higher up on the bluff. Another challenge was raising the elevation of nearly 14 miles of track that belonged to the Chicago, Burlington and Quincy Railroad and ran along the Iowa river bank.[1]

The upper pool is 50% full of sediment. The sediment accumulation destroyed mussel beds that were upstream of the dam. This in turn destroyed the perl button business along the river. Actually, perl button is a misnomer. The buttons were made by punching them out of the shells.[2, page 26]


Update: Keokuk, Iowa Historians posted 25 aerial photos of the 1965 flood. I highlight the first one and another one that has a roundhouse.

Posted by Dennis DeBruler at 7:54 PM