I have discussed the CB&Q facilities, which has several photos that include this trackwork, that were south of the Chicago Union Station (CUS). In particular, the commuter engine and coach service facilities that still exist. And I have described the Amtrak Yard that is south of CUS. This "multi double slip ladders" allows any Amtrak or commuter train to get from the appropriate service yard to an any track in CUS. These complex station throats are such a track maintenance nightmare that this photo has shown up twice so far in MoW groups.

Another view of the north end of the track complex. Harrison Street Tower is now covered by the new post office and the signals have changed. 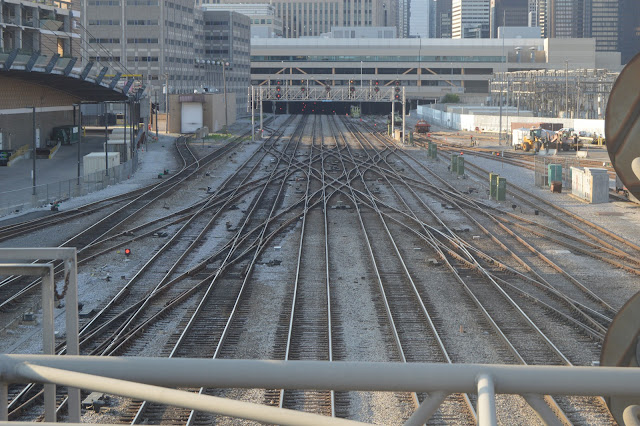 On one of my trips to Union Station, I took photos from an upper-seat of a gallery car as I rode the BNSF/CB&Q commuter into town. The windows are tinted green. Believe it or not, I changed cars to get a window with less green. The first one I set in was practically opaque. For the photos I took before (south of) these, see Amtrak Yard. When I noticed the double-slip switches, I just clicked away to see what I would grab until we went under the new post office where it was just too dark to take photos. 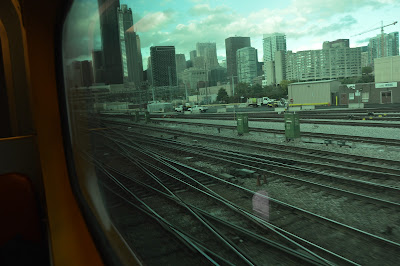 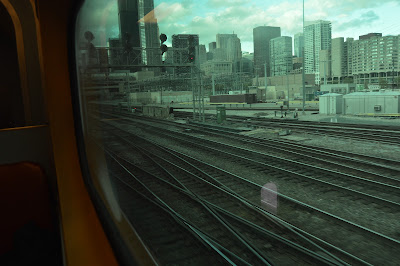 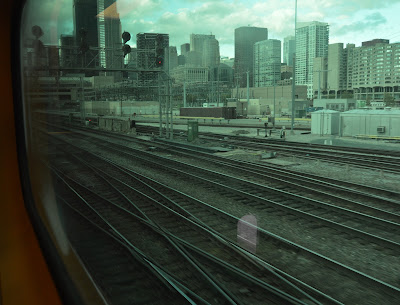 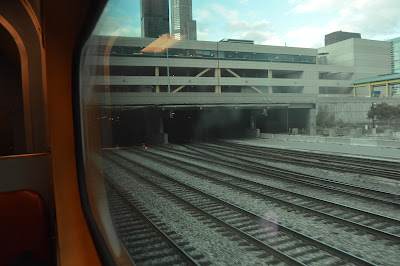 You can tell by the way the commuter car jerks around and makes noise when you approach the station that there is some complicated track work under the buildings that use the track's air rights. But there is no way to see the track work.


A steam excursion running through the double-slips (posted)
Jonathan Eau Claire This was 2002, with 261 running a series of trips out of Chicago to Galesburg and more. These trips notably had a near matched set of Milwaukee Road cars. Insurance rates had skyrocketed after 9/11, but most steam groups had insurance policies paid through 2002 and were able to run without diesels. The following year, 261 and other mainline steam groups would be operating under Amtrak's insurance policies.
https://www.youtube.com/watch?v=m_Rmo4wwqDE
Rob Olewinski Cmraseye 6/22/02 to be exact
Rob C Dargan Good memories. Helped keep 261 hot the night before & after.
James L. Ludwig Rob C Dargan -I will testify you babysitting-each excursion I worked I'd see you early in the morning at Chicago Union Station.
Andrew Cole I got shots of her coming up out of downtown Aurora, taken at the platform of the old Aurora Depot. She was smoky as hell and had the bit in her teeth.


A video of trains going through these double-slips.
Posted by Dennis DeBruler at 6:24 PM