I do not like driving I-65 north of Lafayette, IN. I generally take I-57 down to US-52, and then take US-52 to Lafayette. It wasn't until I saw this line of their covered hoppers being stored along US-52 in Indiana that I realized a railroad paralleled it. I guess I generally do a good job of keeping my eyes on the road because I was not aware there was a paralleling railroad until I saw those cars.

Looking at a railroad atlas when I got back home, it was part of the Big Four route between Kankakee, IL and Indianapolis, IN. (In Kankakee, the Big Four joined the Illinois Central route for access into Chicago. It also had a route from Kankakee to Seneca.) The segment between Lafayette and Kankakee is now part of KB&S.

I stopped in the driveway of their headquarters to take some pictures. Its traffic is mostly agricultural products --- grain out of towns and fertilizer into towns. It handles over 6,000 carloads a year. (IlliniRail)
As you can see from the windshield, it was a rainy day so I didn't get out of the car. And I wanted to minimize the distance that I got onto their property. 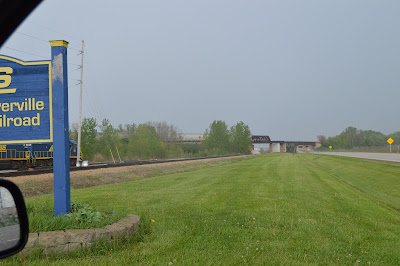 The railroad in the background is also theirs. It was the Milwaukee Road/Chicago, Terre Haute & Southeastern Railway (CTHSE). As you can see from their map, it now runs only between Danville and Hooper, IL. But a Google search can't find Hooper. Their road map shows it going north of County Road 3200N. But the satellite view does not show any tracks crossing that road. Following a satellite image from Iroquois junction north, it goes far enough to serve Loy Farms and Donovan Farmers Co-Op if you use the road view.
This segment is also used for car storage, which can be a major source of income for short lines during recessions. I included just a small part of the "white car" cut in the excerpted satellite image. I think they may be (fracking) sand cars. The brown ones look like gondolas. There was a cut of covered hopper cars up by the grain elevators without an engine. (Update: I found this comment in a Rock Island group posting: Scott Thomas Storage fees can vary from 50 cents a wheelset per day, and up. So a buck a day per car.)

This railroad has been on my "to write" list for several months. The following posting provided the needed motivation.


The Kankakee, Beaverville & Southern Railroad was created in 1977 to operate 30 odd miles of ex Penn Central trackage between Sheldon and Kankakee IL not wanted by Conrail. From those humble beginnings, the company steadily grew to over 155 miles of ex Penn Central, Norfolk & Western and Milwaukee Road routes in northeastern Illinois and northwestern Indiana. Today, KB&S is a friendly, modern, service oriented railroad that is quite interesting to watch and follow. I took advantage of yesterday's sunshine to do just that.


I need to find this location. It is not at their headquarters because there are no silos there. It looks like it may be on an extra siding by the grain elevator in Iroquois
Facebook pictures of nine cars in storage that blew over in the mid-1980s.

The bridge catches a lot of people's eye:
Jesse Berryhill Flickr 2011 Photo showing one of the two wedge plows that KB&S has. The bridge for the Milw part that is over the Big Four part is in the background. The snow on the plow is from the 2011 blizzard. Another view of the wedge plow.   The standard snow plow on a GP38-2M can throw snow quite a ways.   Four engines between the engine with a plow and the tender with a plow.

Posted by Dennis DeBruler at 2:04 PM