Historical Photo of the Week: A trench machine and workers near the intersection of Thatcher Ave and North Ave in Elmwood Park during construction of the 10,000-foot-long Elmwood Park Outfall Sewer on July 8, 1924. The sewer was completed in 1925 at a cost of $446,700 to serve parts of Chicago, Elmwood Park, Oak Park and River Forest.

(That sewer pipe strikes me as being too small to serve multiple suburbs plus parts of Chicago. They probably don't need something this big, but something between the two.)

I remember seeing these "buckets on a chain" trench machines when I was a kid. The other design was buckets-on-a-big-wheel with a conveyor belt to the side under the top of the wheel. I wonder when they quit making these. When I noticed a Ditch Witch dealer in Florida, I stopped in to check it out. Most of what they had was horizontal drills of various sizes. 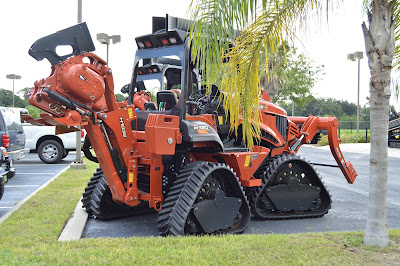 They also had some "quads" with a cable plow attachment. The bar in front would old a spool of cable. The cable would go over the cab and through the plow that would be lowered into the ground to lay the cable. 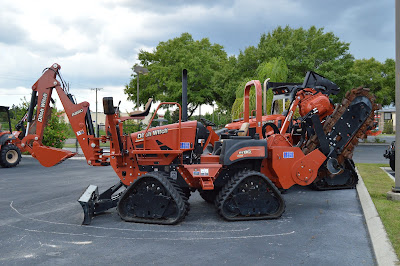 There was one quad that was equipped with a trencher on one end and an small backhoe on the other. Note that the trencher looks more like a chain saw than a series of buckets. Looking at Ditch Witch's web site, trenchers are not used for just small pipes or cables.
A video about the all-new [April 2021] Ditch Witch AT32.
For bigger stuff, either a backhoe on a tractor or an excavator is generally used. After some poking around the net, I was able to find a picture of a bucket-wheel trencher.


This is the kind of chain ditch digger I remember seeing as a kid except they did not have a cab or plow. The pipe would have been rigid and been put into the ditch by more labor.


I believe this was taken when the first diesel locomotive arrived in Dalhart during the underpass construction.

When this video of a big-bucket trencher was taken, excavators where still of the friction drums and cables design. I did see bucket trenchers working when I was a kid. Modern hydraulic excavators are so efficient and versatile, I don't see them anymore. Probably because I have not seen a big pipeline being laid. While researching pipeline construction, I saw a video that indicated that both backhoes and ditchers are used.


And this pipeline construction is using a bucket trencher.

John Schauer shared a post by Jason Barnett.
Rob Mears I hope there’s a museum somewhere that preserves all of these wonderful old machines!
Jason Barnett This one is in a museum on Temple, TX
Aaron Villarreal Rob Mears Texas Early Day Tractor And Engine Association

Posted by Dennis DeBruler at 8:40 PM