(Satellite image is below)

(Update: Ashland and Halsted Yard Towers)
I've been waiting to post until I get a chance to take some pictures from the Halstead Bridge over Barr Yard. But Kevin's photo is a good excuse to post because the "from the sky" views of these big yards are more informative than pictures from a bridge. Plus I can always add any pictures I do end up taking.

The Western Maryland engine is a reminder that it was part of the Chessie merger along with the B&O and C&O. The second engine is so dirty that I could not read what it was. The second boxcar has the Chessie Cat logo. The BN Cascade Green cars are also another reminder of a previous era of railroading. In fact, that many boxcars in a train is now a rare site.

The yard was a lot smaller in 1938. That is very unusual. Normally yards shrink, not grow. Barr Yard is now the main interchange yard for CSX in the Chicago area.

It looks like they may have been strip mining coal south of the yard.


Update:
Four pictures posted by Scott Griffith with the comment "Barr yard area."
Henry Freeman I'm not sure when Barr Yard was originally established, but the current yard is largely the result of a three-year expansion project, which was completed in 1948. When that work was done, Barr had East and West receiving yards holding 345 and 500 cars and East and West classification tracks holding 1,144 and 1,209 cars, respectively. Despite the improvements, it remained a flat switching yard and had a turntable, engine facilities, repair tracks and a stock servicing yard. It was the main yard for B&O road-haul freight traffic in and out of Chicago and the classification point for traffic handled by the B&OCT in intermediate switch. Barr Yard is listed in the B&O's 1935 Form 6, so it at least pre-dates that. At that time, the main yards on the East and West ends had capacities of 662 and 616 yards and there was an East End Section D yard with a 265 car capacity.
David Daruszka The yard was opened in 1886 by Chicago & Calumet Terminal Railway.
Henry Freeman  I found Barr Yard mentioned in a 1910 agreement on Transfer Service pay. Since the B&O didn't acquire what would become the B&OCT until 1910. Barr may have been associated with a B&O predecessor.

Scott Griffith posted seven photos with the comment: "Diesel shop at Barr yard." Some of the photos show the coaling tower or the turntable. 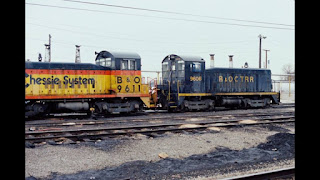 Joe Zeller posted two pictures with the comment: "I absolutely love my job. Especially today, when I cut and installed glass in a forklift at the Barr Yard. I hope to do more flat-glass there, thanks to Mike at the car repair shop."


Two of the nine photos posted by Scott Griffith with the comment: "Steam Locomotive B&O ROAD power at Barr Yard, im pretty sure these have never been seen before."

One of five photos posted by Scott Griffith.

Two of the three images posted by Bob Kalal with the comment: "Riverdale Illinois, CSX Turntable."

Francis Otterbein shared a link to a public group with the comment: "A single GP15T is seen from the Ashland Avenue Control Tower pulling a cut of cars west out of Barr Yard. Note the strings of retired first-generation diesels on the north end of the yard. (Jim Mirabelli photo.March 21, 1985)"

A Flickr photo of the west yard tower from the cab of a switcher.

Aug 10, 2017: CSX has laid off half (60) of the workers in this yard. I've already read complaints of CSX trains parked in the south suburbs blocking crossings because they did not have yard space for the train. Are other yards such as BRC Clearing Yard that much better at handling trains than Barr Yard is? This also assumes that other yards in the Chicago area are so underutilized that they will still have capacity to handle CSX's traffic as the economy heats up.

Posted by Dennis DeBruler at 5:27 PM