These notes are a general discussion of closing gaps in rails. Rail Pull contains photos and videos of rail pull activity by BNSF in Downers Grove, IL.


Yours truly putting out a pull apart fire with a back pack blower. The fireballs were pretty fun to make.

That was a super easy pull apart to fix too. Little 105lb rail, only pulled like 2 inches. It's our main line, on a hill going into a curve, we couldn't let it pass. It does help though if you have dry saw dust. Did another one earlier that day that was pulled almost 4 inches, but we had water logged and frozen saw dust. That gap just DID NOT want to close easily.

CWR (Continuous Welded Rail) has the advantage of removing the maintenance headache of a rail joint every 39 feet. But it does have the problem of no expansion and contraction gaps. The rail wants to contract when it gets colder and to expand when it gets warmer. It is supposed to be laid at the nominal temperature for the area and you hope it doesn't break during cold weather or kink during the hot weather.

When it does break, it is free to contract and opens up a gap. The workers lay fuel along the rail for many feet on both sides of the gap and light a fire to heat the rail to expand it and remove the gap. Then they weld the rails back together. This video teaches us how they then put out the fires.

The phrase "couldn't let it pass" is interesting. I've seen videos of the army experimenting with what it takes to derail a train. A train can ride over a pretty impressive gap when the track is straight. Even so, I wounder how long they would "let it pass" on straight, level track.

Update: It must have been a rather small gap that needed to be closed because they are not heating a very long stretch of track. You can see the black strip they laid along the bottom of the rail that is soaked with fuel.

Michael J Klapperich posted a photo of a smoky flaming rail using a long kerosene rope.
Steven Nilsen Hydraulic rail puller is easier
Mark Saunders and cleaner...
Fernando Pereira Used rail puller on cold weather just to bust other joints heat is the most efficient way.
Fernando Pereira on the olden days used Dutchmen on the winter they not legal anymore. [They would have been fixing sheared bolts at a rail joint rather than a break in Continuous Welded Rail. So I wonder if a Dutchmen is a short piece of rail welded to a joint bar to fill the gap of the break. I also wonder how uniform the gap is when the bolts break.]
Michael J Klapperich Before our joint elimination program, we used to burn ropes basically all day and night sometimes during cold snaps. Used to break out in rashes all over our bodies from the constant diesel exposure. Going thru several of those 35 gal barrels a day was normal. I don't miss it one bit.

A video posted by John Holston
(2021 Update: I see the video has been removed. I presume it was posted by an employee and he was ordered to remove it.)
Later they will replace the rail-bar joint with a welded joint.
Bob Campbell Definitely old school! Diesel and rope
Elrod Rosser That's pretty much still the way it's done in the South....
Ian Dalcourt Striking cold rapidly increasing heated rail with a steel spike maul... mmmm.
Craig Shaw Should be using soft steel maul not a spike maul also dangerous for drift pins of metal chipping
Ian Dalcourt Brass hammers is our go too when trying to slither rail
William Riley Not allowed to use diesel any longer 10000$ fine
Chad DeBoard Bullshit use it everyday on Csx
Christopher Overbeck William Riley you think a 10k fine means anything to a railroad
Rodger Phelps Christopher Overbeck personal fine of 10k plus company gets fine. I was hit with 25k a day by EPA, they dont screw around
Elrod Rosser Damn locomotive sitting there 20 mins. would leak more diesel than the snake, besides, you are burnin' up all the evidence
Craig Shaw When first started on MoPac in St Louis, the section would get used locomotive oil filter and diesel. Then in SW Missouri they’d use rubber shavings and diesel. Then we used blow in cellulose insulation and diesel until someone higher up on UPRR thought about flame retardants could make you sick. Then when I left for train service fiberglass rope and diesel worked well. Now I see they use a non reusable jellified gas rope of some sort
David Stewart Suppose to use a slege hammar for the bull prick not a spikin maul.oh well not one pf us.
Craig Shaw They got a second eye for spare
Chris Castle Wally Hartnell, at CSX we used to use cellulose/insulation and diesel fuel but a year or so ago they found out it is illegal in certain states! So now we have to use fire snake, you are right diesel fuel and whatever else you use to mix with works a lot better and gets the rail a lot hotter than fire snake
Bob Campbell They outlawed it in North Dakota. Catching wheat fields on fire
Allen Bashutski Fire should be on other side of rail so wind blows heat to rail not away
Clifford Titus I was told they don't do that any more. They use a hydraulic pinch clamp. It was second hand information. I am retired.

It looks like they still had a gap of over an inch when they put the bolts in. That is to leave room for the weld.

The bigger BNSF trucks in the track department have hose reels for two pairs of hydraulic hoses. Here we see an attachment to cut the rail. They also have attachments to drill holes in the rail and another to tighten the bolts. They are installing a track panel as part of rebuilding the crossing at Main Street in Downers Grove, IL. In the foreground you can see the joint bars they installed for the middle track that morning.

Here is the truck supporting the work on the other end of the track panel. The power wrench attachment is so small we can't even see it. The attachment that drills the holes is in front of the standing worker. The sprayer next to it is used to squirt oil on the bit as it drills. To the right of the pitchfork, laying on its side, is an attachment that cuts rail. A welding crew will work some night to replace the joint bars with welds. These tracks are normally CWR and support around 100 passenger trains a day (commuters + Amtrak) with a track speed of 70 mph and about 50 freights. 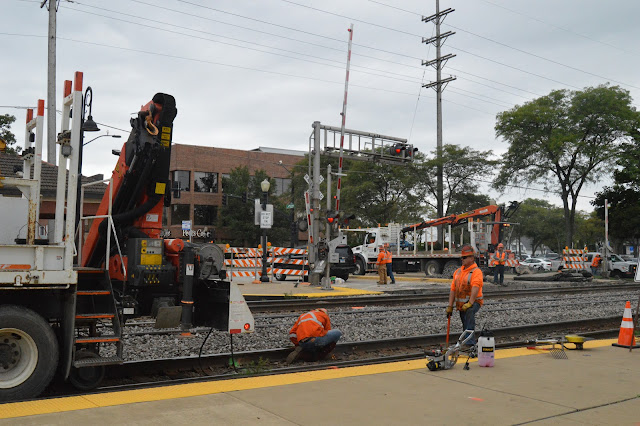 Posted by Dennis DeBruler at 5:23 PM