(3D Satellite)
Surprise. I'll bet you were expecting a picture of Willis Tower. This 14-story tower is a remnant of the Mail Order Plant that Sears built as part of a 41.6 acre complex in 1904. The tower was once home to the radio station WLS -- World's Largest Store -- one of the pioneer stations in America when it began broadcasting in 1924 (WLS). dnainfo explains the plan to renovate the tower.

Sears was founded in 1893, and in just seven years became the country's largest mail order retailer. That growth is a reminder that back then most farmers did their shopping from catalogs and had their orders delivered to the nearest railroad depot. City folk, as well as farmers, could even buy houses from a Sears catalog.

The complex contained the printing plant that for many years produced the Sears Catalog, the company’s principal selling instrument; the nine-story Mail Order Plant whose 3 million square feet of floor space made it the world’s largest business building at the time; the one-story Power Plant which provided heating and cooling for the entire complex; and the original Sears Tower.

Seven thousand men were hired for the project, and each day 60 freight car loads of building materials were used. Eventually, 23 million brick and almost 15 million feet of lumber were consumed in the completing the project. By October 1906 the Mail Order Plant was complete, and on January 22, 1906, the company transferred its entire operations to the new facility. In later years, Sears added to the complex a merchandise manufacturing facility, a sunken garden, parking decks and lots, an automotive center, an Allstate Insurance Building, a distribution facility, a construction and display building, and numerous support structures. Until 1973, when the 110-story Sears Tower, the world’s tallest building, was completed in downtown Chicago, the Sears, Roebuck and Co. Complex served as the firm’s headquarters.


In the 1920s extensive athletic facilities were added and athletic field events [below]. They encouraged after-work socialization to keep high morale among their employees. Included were a clubhouse and tennis courts, and the Sears Department of the YMCA. Events included an annual track and field competitions, and company baseball teams. (company) 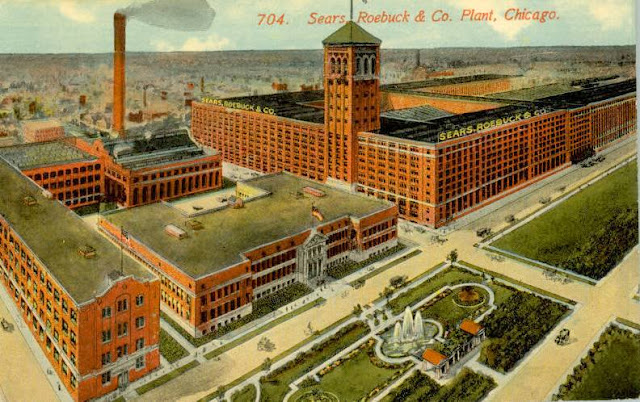 David M Laz posted
Post card of Sears on Homan and Arthington, 1906!
Kevin Ahern posted
The HABS photos are from the Historic American Buildings Survey of the Mail Order Plant.


By 1926, the first ground level parking lots replaced the athletic fields. This happened at the same time that a strategic shift from catalog sales to retail stores had started with easy auto travel making travel to a store more practical. The first Sears retail store opened in Chicago on February 2, 1925 in the Merchandise building. This store included an optical shop and a soda fountain. (company)

The company relocated its offices to the Willis/Sears Tower in 1973-74. In 1987, it closed down the distribution facility. (Original) This is ironic because online shopping is replacing brick-and-mortor shopping with ordering-and-delivering shopping. Sears survived the transition from delivery to retail stores. It does not seem to be surviving the transition back to a delivery business. (Business)

The 1905 power house has been repurposed as a charter high school with the neatest cafeteria ever. (PowerHouse) (2019 Update: I see that the PowerHouse link is now broke. Now you need to scroll down to their Power House Great Hall in EventSpaces.)

Sears began to decline in the 1970s even before online shopping because of the new kids on the block such as Kmart, Kohl's, and Walmart (Wikipedia). Sears sold the tower and moved to a new office campus in Hoffman Estates, IL in 1995.

The Business Insider has an article about the historically registered buildings being left to decay. It has several photos of the buildings including interior shots.

Nitram242 has posted several photos of the restoration of some remaining buildings. I selected this view of the old Allstate Sears building because it includes Willis Tower in the background. It is a nice juxtaposition of the old and the older.
This excerpt from a 1938 photo is between Independence Blvd. and east of KedzieAve. The smoke about in the middle of the image shows where the power house is. The building between Central Park and Homan is the Mail Order Plant, of which only the tower along Homan remains. The railroad running south of the Sears Complex is the B&OCT Homan Yard.

The following is an excerpt from a 1952 photo.

See Homan Avenue Yard for a contemporary satellite view of the complex.
The view below is of the west end of the Mail Order Plant. The city gave them permission to build across St. Louis Ave. so that it spanned the two blocks between Central Park and Homan Avenues. The tower you see on the left is on the east side of the building along Homan Avenue.

Electricity, still a relatively new invention, "operated the ventilating system, escalators, and transmission belts for carrying merchandise between the stock departments and the shipping departments. Over nine miles of pneumatic tubing quickly transported letters and other papers from one department to another. (company)"

You can tell this picture was taken early in the 1900s because the brake wheels are still on top. I'm sure the workers appreciated that the cars were under a roof.
This view of the west end shows that the train shed was in the middle so that the boxcars could be unloaded and loaded from both "legs" of the building.
And a view of the west end of the Mail Order Plant from the perspective of a B&OCT collection of photographs.
Update: Moshe Tamssot posted nine pictures of and from the tower in the public group Forgotten Chicago. These are two of them. His comment:


Climbed the Old Sears Tower to get shots of Chicago's skyline, including the newer Sears Tower. I did not know this Inception existed. You can now rent out the two story event space at the top of the tower, for $2,400 per night. For reference, the newer Sears Tower is 108 floors, versus the original 14.smile emoticon.

Jimmy Smiles explained: " The building with smoke stack is central park water pumping station." The view west is what has replaced the Mail Order Plant.

Moshe added the south view as a comment. I include it because it shows how much of the B&OCT Homan Yard is now vacant.

Posted by Dennis DeBruler at 8:21 AM