Information after clicking the marker:

Kevin Piper posted a history and several photos.
I learned from this Mark Llanuza post that the CB&Q crossing used to have Tower JC. (Tower JA was north of JB.) Mark's posting has several interesting photos and maps. Hopefully you can access a link to a closed group.

An eastbound yard did leave the yard while I was there. 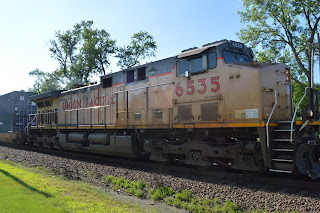 Another railfan had been their for hours and I had just arrived, so I told him I would stay out of his way. That is why I did not get a video of the engines going by. But I did take a sample of the speed and noise. They were all 40' 5-pack well cars, so this was probably a train from a west coast port.


CB&Q 9911A waits for JB Tower to alow the Zephyr to cross over to the old Q West Chicago branchline.


The posting did not mention what town this is in, but I suspected it was in West Chicago. A Google search confirmed this. There is also a railfan video of a southbound CN/EJ&E train at this location.

The tower sets in the northeast quadrant of the EJ&E and C&NW crossing. Since CB&Q crossed the EJ&E just a little further south, it evidently also controlled that movement.

This CB&Q route would have been the original route from Aurora to the Galena & Chicago Union that Aurora businessmen used to access Chicago. The CB&Q also built west of Aurora. Because of heavy traffic on the route, G&CU forced CB&Q to build their own route from Aurora to Chicago. They got it done during 1862-64. (That would be a major construction project to get done during the Civil War.) So their original mainline is now just an industrial spur. I see it now stops at Norris Ave rather than continue along Church Street until it meets the UP/C&NW.


William Shapotkin: OK, we're looking N/B across the C&NW. Dah -- the street xing really gave it away Update: Mark Llanuza posted a color photo a couple of GP-38s in the J-ball livery passing the tower. And a couple of comments had more J-ball photos. I know the group is closed, but it is work copying photos and comments. So if you are interested in EJ&E pictures, you should probably join the group anyhow.

Mark Llanuza posted three pictures of the interior with the comment: "A view of JB tower in West Chicago IL 2010 while doing a project for Metra."


Jerry Hund posted two photos with the comment: "Downtown West Chicago railroads. On the left prior to 1939. On the right is today. One update is that the BN no longer joins the UP. It has been cut back about a half mile."
Thomas Leaton That was 1995. The BN tracks are now cut back to the old General Mills plant, and do not now connect to the C&NW/UP. These were Burlington's first and oldest rails, dating back to when the Q had no Chicago connection except for Turner Jct.


Mark Llanuza posted two photos with the comment: "The year 2009 were at JB tower in West Chicago IL."


I had these 3 photos taken of me at West Chicago tower just before Barrington tower was closed and my services were no longer required. This is JSW-3 heading back to Joliet on June 20th, 2002 with I believe Dwight Rogers grabbing the paperwork and Chris Shoudis inside. I wanted photos of me showing an art that operators used to use daily, handing up train orders. Photos by Jason Tykac.

Jason Tykac I think these were taken before I left the J in February 2002. Maybe taken in 01? Thanks for sharing, those were good times!


Can anyone fill me in on this interlocking and tower? There is an old (CB&Q?) ML that now stubends south of diamonds. Is that still BNSF? Is this where the UP line to Belvidere begins? Saw a RR crewman walk into tower, but not sure if it controls anything.I believe it is more than just a set of interlocked diamonds. There is a complex layout of connection tracks out of sight.

Joel Kirchner JB Tower, West Chicago Tower or Washington St. are names it goes by. The tower controls the crossing between the CN and UP. It also controls movements into UP West Chicago Yard and to the Belvidere Sub on the UP. It also controls the connection switch from the CN into UP's yard. There is also a crossover switch between MT1 and MT2 on the UP, but it is typically used only for the aforementioned yard or Belv. moves.

At one time it controlled the BN diamond as well as another diamond with the CNW just to the north. This was the original alignment of the Belvidere Sub. In later years or stub-ended into a scrap yard. This was called the B Plant. This was removed in the early 90s. The CN connection was built during "J" ownership and is now called the B Plant.

Flickr photos of the model board and the interlocking machine.

The opr at JB tower in West Chicago once told me about an incident that occurred at that location many years earlier when elephant droppings from a circus train that had just passed fell into a switch, causing it to jam and delaying a passenger train. When he reported the incident to the dispatcher, the DS initially refused to accept the explanation, saying, “I can’t show ‘elephant s**t’ as the cause of delay to a passenger train!”

There was another incident involving a circus train that was documented long ago in the Milwaukee Railroad employees’ magazine.

As a circus train slowly was slowly going around the wye in Davis Junction, Illinois, a an elephant reached out his trunk and deftly “stole” the conductor’s copy of the train orders out of the “order hoop.” Fortunately, the quick-thinking station agent, who witnessed the “crime,” replaced them with the office copy just before the caboose went by.

Chuck Stew posted a photo of a Metra train going past the tower on the EJ&E tracks.
A Michael Quagliano 2017 photo of a CN engine passing the tower.

This video's comments are:


This line is the oldest part of the former Chicago, Burlington & Quincy Railroad being chartered in 1848 and opened in 1849. The line has been in continuous service ever since, but is now only classified as a branch line that services industries in the towns of North Aurora, Batavia, and West Chicago, Illinois.

But the first part is an eastbound mixed freight rolling past Belmont Station on the Racetrack.  He must have edited together shots from at least two different cameras. To get two manifest freights on the Racetrack instead of unit trains is rare. The branch footage does not start until 6:09.
Posted by Dennis DeBruler at 11:33 PM