I came across four Facebook postings demonstrating streamlining in about a day. That is an omen.

CB&Q is famous for developing its streamed Zephyrs in conjunction with Budd. But I see they put shrouds on their passenger steam locomotives as well. West Hinsdale is on the Racetrack between Chicago and Aurora that had three tracks. So it was not unusual to see two trains going in the same direction. But to be precisely aligned at the photographers location, you have to wonder if this is a publicity shot.

Streamlining was the convergence of a couple of trends in the 1930s. One was that Industrial Design was becoming popular. Another was the depression. Railroads wanted to do something to "make a splash" to entice travelers to leave their car in the garage and take the train again. I still have to research if there was also an improvement in steel press tonnage that allowed the forming of more graceful (bigger) curves in the sheet metal.

Raymond Loewy and Henry Dreyfuss were competing industrial designers, each with their own design studios. I knew one worked for Pennsy and the other for NYC. Fortunately, the above link indicated that Loewy worked for Pennsy. So Dreyfuss would have been the designer of this Hudson.

They not only designed the shrouding for the locomotive, they designed the livery and interior of the cars. For example, notice the stripes going the full length of the train. See DieselPunksNYC for many more pictures.

Pennsy was cranking out several steam locomotive designs such as the S1 and T1 to improve steam locomotives. And Loewy streamlined each one. The photos that used to be here for the S1 and T1s have been moved to their own notes.
I don't want to study their Copyrights, so please browse DieselPunksPennsy and GoogleImages directly.
I also learned that Otto Kuhler was another famous industrial designer that did locomotives. He designed C&NW's Hudsons (pictured to the right) of which nine were delivered in 1938. They were more powerful than NYC's Hudsons. (DieselPunksCNW)

This was one of the postings I came across. Some streamlining jobs were rather pragmatic (cheap).

Steam locomotives needed a lot of maintenance. And the shrouding made it even more time consuming. Some railroads, after determining that streamlining was not helping them win the battle with the car and plane, removed much of the shrouding.

For designs of other railroads, JitterBuzz looks like a good resource.


Here we have an interesting design for a diesel passenger engine, The Green Diamond was a streamlined passenger train operated by the Illinois Central Railroad between Chicago, Illinois and St. Louis, Missouri. It operated from 1936 until 1968. It was the Illinois Central's first streamliner. Motive power was provided by 1,200 hp (890 kW) EMC Winton 201-A 16-cylinder engine. A second generator within the power car provided electricity for the lights, while a separate steam generator heated the train.


Recently there was a discussion in a FB group about the IC's "Green Diamond" trainset. For my friends who aren't die-hard train fanatics, this five car trainset was built by Pullman-Standard and was the IC's first streamlined passenger train. It entered service in May, 1936, between Chicago and St. Louis and ran that route until 1947 when it was replaced with conventional cars and locomotives. The trainset then moved south and ran as the "Miss-Lou" between New Orleans and Jackson, MS, until 1950 when it was scrapped.
A couple persons asked about the layout of the "Green Diamond's" cab. These two photos from my collection show the sparse layout of the cab and its controls. It is definitely a far cry from today!

Maunsel White This trainset was troublesome from day one. It had the original 1936 version of Head-End-Power. However it was 64 volts DC power which required huge gauge jumper cables between the cars. We had an old Pullman electrician friend who had worked on it as the Miss Lou out of New Orleans. He always described the train as a nightmare of maintenance headaches. He was appalled when Amtrak went to HEP and cited his experience on the Miss Lou as the reason.

Streamlining of automobiles in the 1930s was not a surprise.
But I was surprised to learn that International Harvester hired Raymond Loewy and John Deere hired Henry Dreyfuss to design their next generation of tractors. But these designers did not just add curves to the sheet metal. They reexamined other aspects of the tractor's design such as the placement of controls.

Below is a Farmall designed by Loewy. A Model H is one of the tractors I used to drive as a kid. Typically, we used it to rake hay.

(Update: Styles change. When Loewy was hired by Cockshutt in 1958 to design their new line of tractors, he went with a very square front end.) 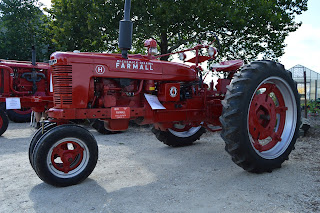 To put the work of Loewy in perspective, here is a picture of a previous generation Farmall Model F-30. This unit was built in 1937. 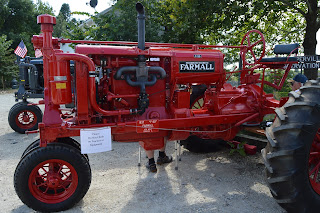 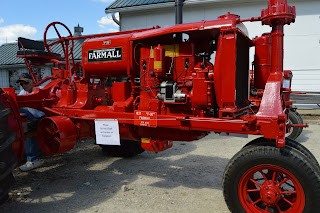 Some improvements are obvious like covering up the hot exhaust manifold. What looks like fashionable streamlining in the front is functional --- it is a grill that helps keep debris off the radiator. The flywheel is mounted higher so that probably made it easier to keep the belt from rubbing the ground.  On the F-30 I don't see any clutch or brake pedals. That would expain why there are so many levers sticking up here and there on the F-30. That means you would have to be careful when stopping to not run out of hands since you also need to steer. At least you were not manipulating hydraulic control levers or the PTO clutch back then.

The Henry Dreyfuss designed John Deere looks similar enough to Loewy's Farmall that you wonder if industrial espionage is an old practice. 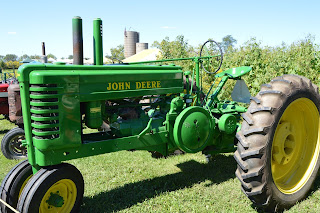 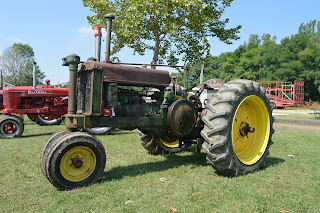 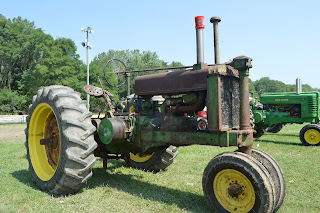 I don't know who the designer was for Case, but you can see it made a similar transition. 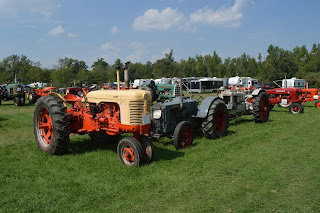 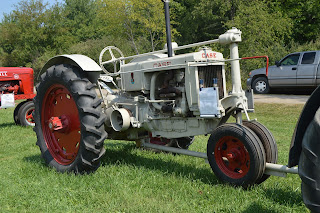 Seeing what tractors looked like before IH and John Deere hired industrial designers made me appreciate how radical Ford's design was. This one was at the Winter Garden, FL, Heritage Museum. Note the steering wheel is in a more natural position than even the redesigned IH and JD. But more radically, it doesn't have a frame. It is a uni-body construction. The engine, transmission case, and differential case are bolted together to become the frame of the tractor.. 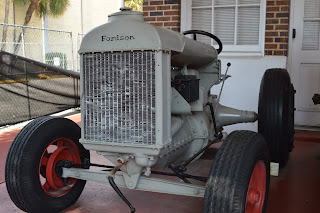 Alex Tremulus was another famous industrial designer. In addition to designing for Ford, he designed a street sweeper. They had been selling 52 units a year. The new model forced them to work three shifts a day, seven days a week and they produced 400 units a year. The owners were so frazzled by the extra work that they evidently sold the business to Austin-Western. (WorldSweeper)

I end with a photo dump of a 1929 Hart Parr. I believe it was a pioneer of the gas powered tractor. Remember IH and John Deere started as implement manufactures (reaper and plow). The Farmall 1939 design endured for more than a decade. But as you can see, there was a lot of change in the decade before that design. 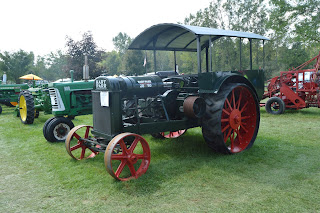 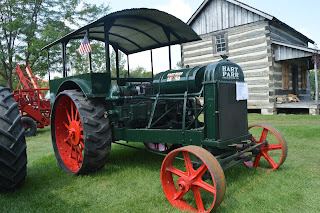 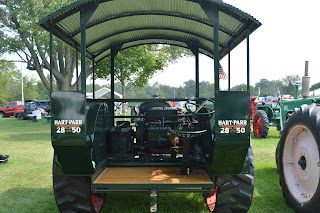 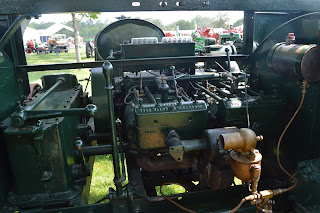 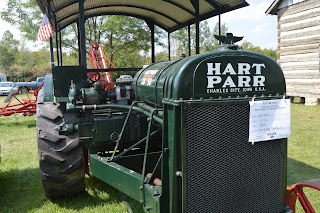 Posted by Dennis DeBruler at 7:40 PM