(Update: there was also a grain elevator and a cold storage warehouse next to IHB in Indiana.)


More pictures and info concerning this elevator. Of note is the referenced SubStreet page. I read the elevator was closed in 1962 and many Riverdale administrations promised to tear it down. It was finally removed in 2015. More videos of the "big boom": 1, 2 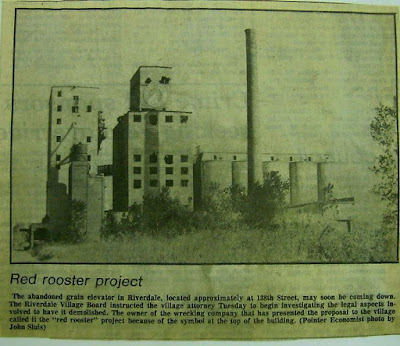 One comment indicated that this grain elevator had been used for fire fighting practice.

Move this video to -2:32 (or 1:44 into the video) for the start of the explosion that topples the tower. If you go to the Hales & Hunter Grainery Group you can see pictures of them first taking down the silos with wrecking balls. And it has some more videos.

Update:
In the background of a railfan picture in the IHB Blue Island Yard.

From photos, we can see that Arcadia was north of the yard. Was it just west of Halsted Street?

We can see Hales & Hunter to the left of the signal pole in the following photo.
So the red building was added between the white building and the silos. The style of the English reminds me of the late 1800s. I'm surprised that such "flowery" prose was still in use in 1916.

A photo of open autoracks with the grain elevator in the background.
A search URL that finds many videos and photos of the demolition of the H&H elevator
13:43 video  This says the elevator was built in 1896.   Both of these mills made livestock feed. The development of supplements such as Master Mix made these mills obsolete because farmers could grind their own feed. One reason the buildings stood for so long was ambiguity as to who owned them.
Posted by Dennis DeBruler at 10:00 PM