A major function of this elevated yard was to serve the Sears Complex along its north side. It appears from the trees that they removed parts of the elevation. If so, that is the first time I have seen a Railroad do something to approve their appearance in a neighbor hood. There are no tracks left in this yard. Just the mainline running along the south side.

As comments to a Henry Freeman posting, David Daruszka provided Sanborn Maps of the east end. 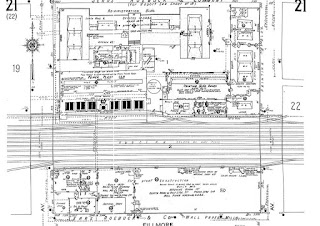 
West end of Homan Yard on the Altenheim Sub. It appears to be an engine switching out Sears in the distance. Photo from the Barringer Collection.

This would be the spur that the B&OCT used to serve the trainshed that is between the two "legs" of Sears' Mail Order Plant.


To Les Wuollett and others. I hope you and your families are well and we all get through these difficult times unscathed. I was wondering if you might have some insight on how Sears on the Altenheim Branch was switched. I can see from photos and track plans that the Merchandise Building was switched on two levels. It looks easy for a switcher to access the low line by the ramp, which is still there and used today by kids riding bikes. It's the high line (and the power house) that makes me curious about how cars were spotted. I see in the ETT that both of these bridges had weight restrictions for cars with gross weight exceeding 220,000 lbs (110 tons). Were reacher or idler cars used for these locations? Or, did Sears have a plant switcher, such as a 70-tonner, for these moves? Were cars at Sears spotted to specific doors? Were 50-foot or longer cars spotted at the Merchandise Building or was it mostly 40-footers? Any thoughts you or others might have on the rail operations at Sears would be appreciated.

Posted by Dennis DeBruler at 1:59 PM