Please access the CSL link above for old and new maps of the railroad.

Mike Anderson's posting of a Chicago Short Line engine motivated me to try to figure out where the CSL runs (ran?). Mike's comment is "95th and Ewing," so which of the three crossings in that area is he at? It turns out he is at the Ewing crossing because it has those two solid white lines and an extra thick yellow line. In 2003 CSL became South Chicago and Indiana Harbor (SCIH) (Wikepedia)
The detailed B&OCT Map I use of the Chicago area shows just a couple of very short CSL lines on either side of the Calumet River. So how are they connected? The answer will turn out to be trackage rights.

Specifically, SCIH/CSL now owns very little track but has quite a bit of trackage rights, relatively speaking. Their yard is northeast of their headquarters. For additional information and some maps, please see CSL and SCIH.

Thomas Nall posted a picture of their cabooses. Note that Jerry Jackson provided a better picture in the comments.

I wonder how he got high enough to get a picture over the concrete embankment.

I did get a clear shot of the caboose in one of my bridge pictures. 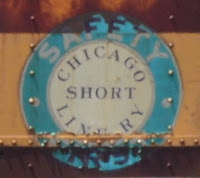 Nate Carpenter posted two photos with the comment: "South Chicago & Indiana Harbor transfer caboose #4 heads a coal train shove-move @ CP502 in East Chicago yesterday. I never knew that this operation ran further east than the canal..."
Edward Dolle Is the old Inland Steel plant even in use? I know that the old LTV Steel plant is running again.

Denis Johnston Actually producing more steel, with less than half of the employees they had in the 70's.


Bill Johnson has a Flickr Album of four pictures, three of which include an industrial scene. Two switchers on the B&O bridge before it got hit. I remember this elevator as Falstaff, and a comment confirms it. I used to ride by it when I took the Pennsy from Fort Wayne to Union Station then walked to catch the "L" to Evanston when I went to Northwestern. A view from CR Tower looking over the CSL yard and buildings with the Stateline Generating Plant in the background.  There is a BN gondola peeking out behind a freshly painted Conrail hopper. An article about the CSL. 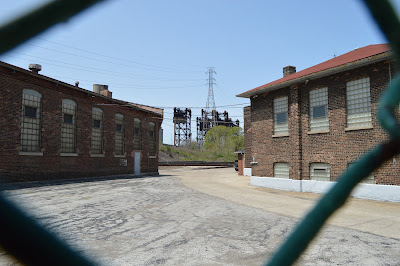 An Arturo Gross Flickr photo caught two locomotives between the buildings with the elevator and lift bridges in 1994. His photo shows that the second Pennsy lift bridge had been removed by 1994.
Jerry Jackson updated with a John David Larson Photo that shows the caboose end of a CSL train on the Pennsy tracks headed to the lift bridges.

Arturo Gross Flickr 2014 Photo shot from S. Ewing Ave. Bob provided the following photo in a comment:
Art Gross posted a photo of a CSL train in Pullman Junction. Some comments are noteworthy.
Chicago Short Line SW1500 30 brings a cut of cars through Pullman Junction In Chicago (probably to or from Calumet Yard considering every car in view is N&W), coming up on 44 years ago Feb 1976. Original Kodachrome photographer unknown Art Gross Collection.
https://www.flickr.com/photos/arthurbig/
Rod Truszkowski Back then the CSL / NS interchange was at irondale in the old interlake coke plant.
Andre Kristopans CSL (the railroad) was owned by Youngstown Sheet & Tube. Main business was the mills at Indiana Harbor and Iroquois Landing and coke plant at Irondale.
Fred Pajak posted several photos of a train working in South Chicago and engines in their terminal.

1976 Flickr of CSL train about to cross the Pennsy Calumet River Bridge.
Nick Hart posted three locos pulling a train out of the Indiana Harbor steel mill.
Bob Lalich
CSL was originally controlled by Iroquois Iron, then Youngstown Sheet & Tube. The corporate succession got complicated in the 1970s and 80s, resulting in LTV ownership by 1984.
Edward Weisensel posted six photos that include the caboose and SW1500 13.
Marty Gatton posted several photos and videos of yard work on Oct 31, 2021.
Posted by Dennis DeBruler at 6:28 PM