Update: I have found a more extensive history of road graders.

Two road grader pictures in one day means it is time to post what I have on road graders. You don't see them very often anymore because most country gravel roads have been paved with asphalt.

I wonder if this plant in Marseilles was still using water power, or it they had converted to a steam engine.  I assume this plant used shafts, pulleys, and belts. The 1890s is too early for an existing plant to have been built using electricity.

Another 1890 grader that is horse drawn. Since Carroll Avenue is along the Milwaukee Road, I assume it had an industrial spur.

I now have a separate article on the Austin Western Road Machinery Co.
To quote the reference in the caption: "There was no hydraulic system. The blade was managed by dog clutches and drive shafts turning pinions on racks, and the brakes were mechanical." Reading how a little gas engine was used to start the main diesel engine was fascinating. Note only did the driver have to hand crank the gas engine, he had to climb up on a wheel to manipulate three levers that controlled the compression, clutch, and starter pinion. He then had to let it run 1-20 minutes depending how cold the weather was and go into the cab to open the throttle. There are several more pictures of the grader on the referenced web page.

Austin-Western was a pioneer of using hydraulics to control the blade. Cat used two axles in the back and one in the front. A-W used just one axle in the back and it steered both axles so it was much better suited for working tight spaces such as parking lots. They also introduced front wheel drive.
When I wrote 8 to 3 tractor companies, I learned that we are left with John Deere, IHcase, and Massey Ferguson dealers. While in Florida, I went to what the Massey Ferguson web site said was a dealer in Plant City. When I got there I learned it was a construction equipment dealer with various brands such as John Deere and CAT.
When I came across a used Fiat-Allis road grader, I was reminded that Allis-Chalmers was one of the brands folded into Massey Ferguson. The Fiat-Allis brand was used from 1974 to the early 1980s (tractors.wikia) 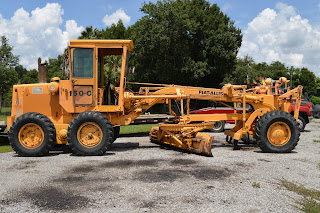 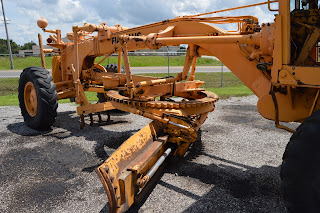 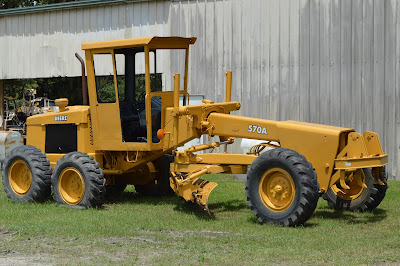 They also had a modern John Deere.

HWequipment provides a timeline of the graders development.

Update: a video showing road graders in action. Note the slanted steering wheels to help offset the sideways thrust of the blade pushing the dirt to the side.

Richard M. Gaskill Taken near Eureka in northern California this view features the Russell Grader - one of the more popular graders of its time.After beginning with horse-drawn graders, the Russell company made the transition to gasoline power by providing their grader mechanisms to several tractor companies, who outfitted the graders with their engines. Besides Allis-Chalmers, the Caterpillar company also adapted Russell Graders for gasoline power. In the late 1920s Caterpillar bought the Russell company, and began making the graders under their own nameplate.

Brian Trimble provided a link for the Model 6-12.

A video of a dealer's sample. One reason for saving this link is that it also includes some hit-miss engines operating along the side.

A video of a 25M pushing dirt during its test run. I noticed that its model number is one more than the 24M above :-)

At the 2016 Will County Threshermen's Show they had an Allis-Chalmers M 100 road grader. Note that this is an older design because everything is done with either hydraulic motors or "arm strong" shafts except moving the blade from side to side. That has a hydraulic cylinder. The shaft along the top of the box beam frame is obviously for stearing. The shaft along the right side of the beam (see second and third photos) is probably to adjust the tilt of the front wheels. 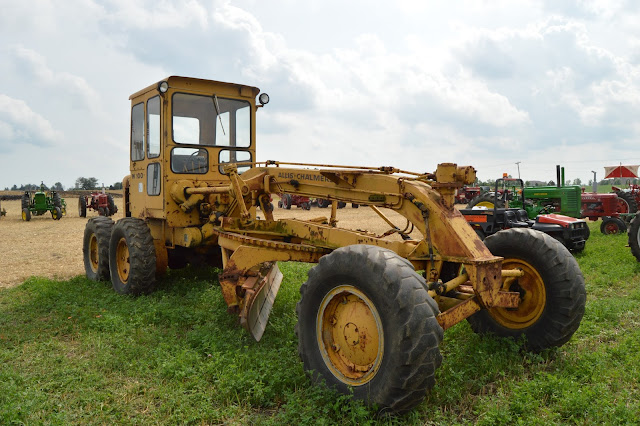 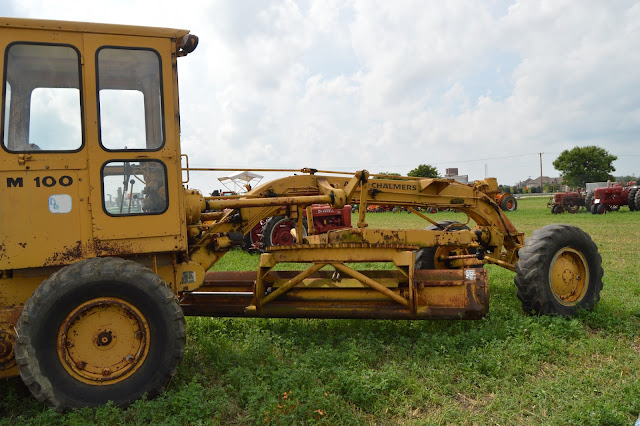 Posted by Dennis DeBruler at 6:43 AM

Email ThisBlogThis!Share to TwitterShare to FacebookShare to Pinterest
Labels: hydraulic